The first half was one of the worst starts to a year ever. Record inflation, rising interest rates, and meteoric valuations took the wind out of the sails of financial markets.

The fear and panic that has ensued has caught most investors off guard, and the debate surrounding whether or not the U.S. is already in a recession is well underway.

But there are signs that the fear pendulum swung way too far, and the worst could be behind us. If so, the coming months could offer ample opportunity even if the economy were to deteriorate further.

The question that seems to be top of mind for most investors these days is if the U.S. is in a recession or not. Twitter polls like the one below appear to indicate a lack of consensus on the subject1.

Those who voted “yes” can point to prices rising from gas pumps to grocery store aisles and a Federal Reserve who couldn’t have handled the last 18 months any worse. Consumer confidence is also the lowest it’s been in 70 years, and the 30-year mortgage rate has almost doubled since January2.

The nays could argue that if this is a recession, then this country could use more recessions. Consumer spending is robust, corporate earnings remain high, unemployment is close to an all-time low (yet there’s still two jobs available for every one person looking), and manufacturing is growing in mid-single digits.

But the problem with this question is that there’s no definitive answer. It’s not an engineering problem that can be solved with Newtonian physics but rather asking an opinion. Twitter may as well be polling whether Michael Jordan or LeBron James is the greatest of all time. The answer depends on the data presented and how each side values each data point (despite LeBron's bobblehead in my office, it’s obviously Jordan).

Don’t expect the government to help either. The National Bureau of Economic Research (NBER) is the agency tasked to call recessions, and they’re notoriously late to the party. Back in 2020, they officially called the recession after it had already ended. We probably won’t hear from the NBER for many more months, but in the spirit of being conservative, let’s assume we are in a recession today. Is that such a bad thing?

Recessions don’t typically last all that long - the average is around 11 months3. They’re not only a natural byproduct of the economic cycle, but also every recession has created the foundation for future growth. The really bad ones like in 2008 are exceptionally rare, and there’s virtually no evidence to suggest that we are at the precipice of a similar crisis. If anything, consumers and businesses appear to be better prepared today for a recession than any other time in history.

Furthermore, maybe a recession is just what the country needs to help get back to “normal.” It’s hard to say what’s worse – a brief period of economic contraction or waiting over a year to replace a refrigerator that costs 25% more than it did six months ago. Affording supply chains time to rebuild and clipping inflation’s wings a bit wouldn’t be the worst thing that could happen over the next few months.

The table below ranks the first half performance of a portfolio consisting of 60% stocks and 40% bonds represented by the S&P 500 and Bloomberg Aggregate Bond Index (Agg) respectively1. This year has been the worst start by far in history. It’s not even close. 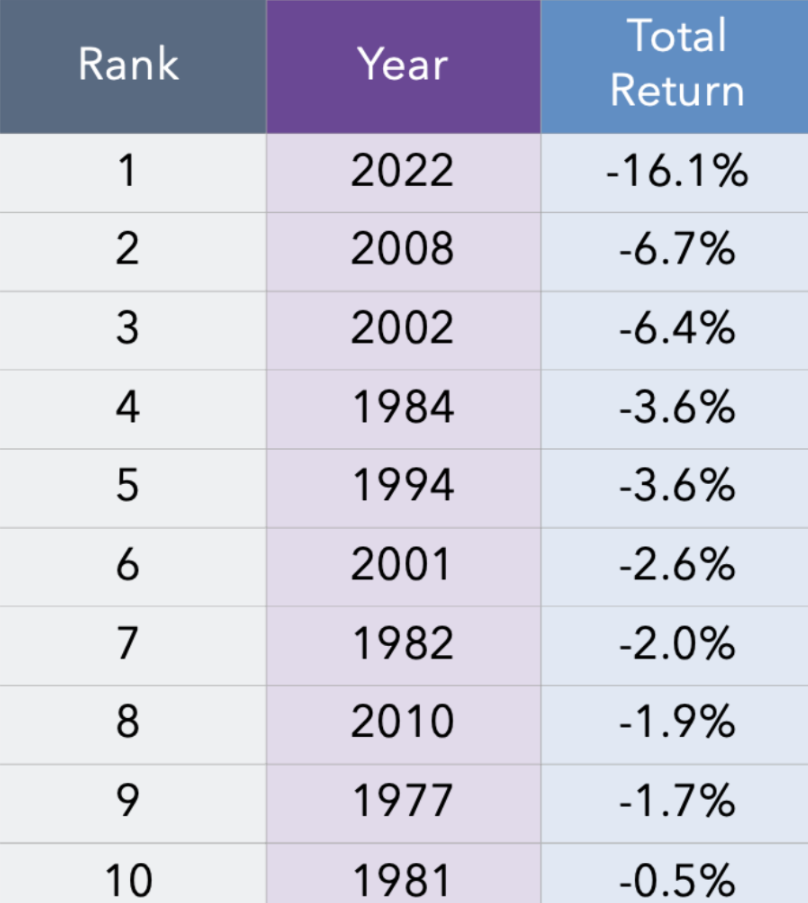 The textbooks teach us that this 60/40 portfolio represents a “moderate” risk tolerance. When stocks get hit, the bonds should soften the blow and vice versa. In fact, the last 8 times the S&P was down in a calendar year, bonds finished the year up1. However, the bond market has not only failed to deliver, it also just recorded its worst first half performance ever.

Making this kind of history isn’t quite as exciting as breaking records last year when markets soared higher. But herein lies the problem - the stellar returns of 2020-2021 were artificial. They weren’t generated by economic gains, entrepreneurship, and/or innovation. Instead, they came from printing money, keeping interest rates way too low for way too long, and sending checks in the mail to consumers. It was unlikely that these gains would stick around in perpetuity, but the speed at which markets gave them back was surprising.

Nobody knows for sure why markets move the way they do over the course of a few months. However, it’s safe to say that concerns over rising interest rates, the highest inflation rate in over four decades, and meteoric valuations coming back down to earth all contributed.

There’s also been nowhere to hide. Not even gold, which many pundits still view as a panacea to inflation, could come to the rescue (down 5% so far this year4). Other commodities like copper are down way more. Cash can’t even offer protection. Based on the Consumer Price Index (CPI), which is a measure of overall inflation, an account with $1 million in cash is losing over $90,000 in purchasing power on an annual basis4.

Simply put, patient investors that remained disciplined were punished in the first half of 2022 in a way we’ve never seen before.

Mike Tyson famously said, “Everyone has a plan until they get punched in the mouth.” The first half of the year felt like an uppercut with brass knuckles, but there are signs that suggest much of the pain may be going away for both stocks and bonds.

Starting with stocks, the chart below suggests that there’s blood in the water and lots of it. In layman’s terms, this chart is depicting capitulation - how many investors have thrown in the towel measured by the percent of companies trading below the value of cash on their balance sheets. 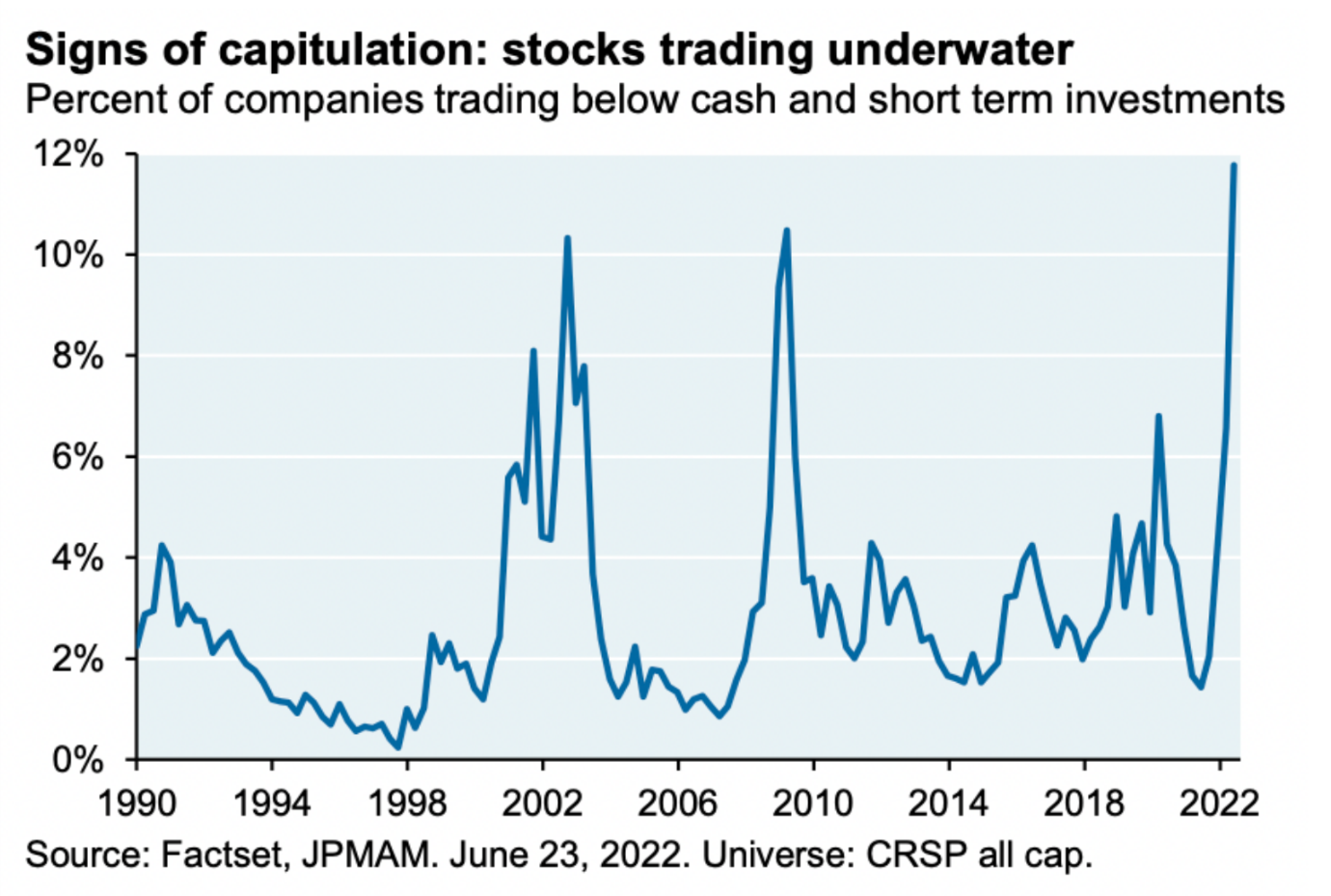 Here’s another way to think about this concept. If Elon Musk were to buy any one of these companies, he would pay less than the total value of the cash sitting in its bank account. This makes zero sense, and the fact that it’s at a three-decade high suggests that we could be approaching a bottom in the stock market.

If so, the table below shows that there could be an opportunity cost of waiting for the economic recovery before investing. Equity market bottoms typically happen 6-9 months before the economy bottoms, and the returns between these two have historically been very rewarding.

Moving to the bond market, back in December 2020, we adjusted our fixed income strategy to get more defensive just as we published the following commentary:

“Every sector in the bond market except Senior Loans is trading above ‘par’ or the issue price for a bond. When bond prices rise above par, they trade at a premium.

Bonds are loans. If a lender gives $100 to a borrower for two years, at the end of the loan, the lender is only going to get $100 back (plus interest). Meaning, bonds don’t mature at a premium, so this chart should serve as a warning to anyone with a laissez-faire attitude to fixed income.”

Our primary concern at the time was the valuation of the bond market, but the last six months changed everything. The chart below shows that nearly every corner of the bond market is now trading at a discount (lower than the yellow line)4. Whereas bonds don’t mature at a premium, they also don’t mature at a discount (unless issuers default). If so, bonds could be getting more attractive by the day. 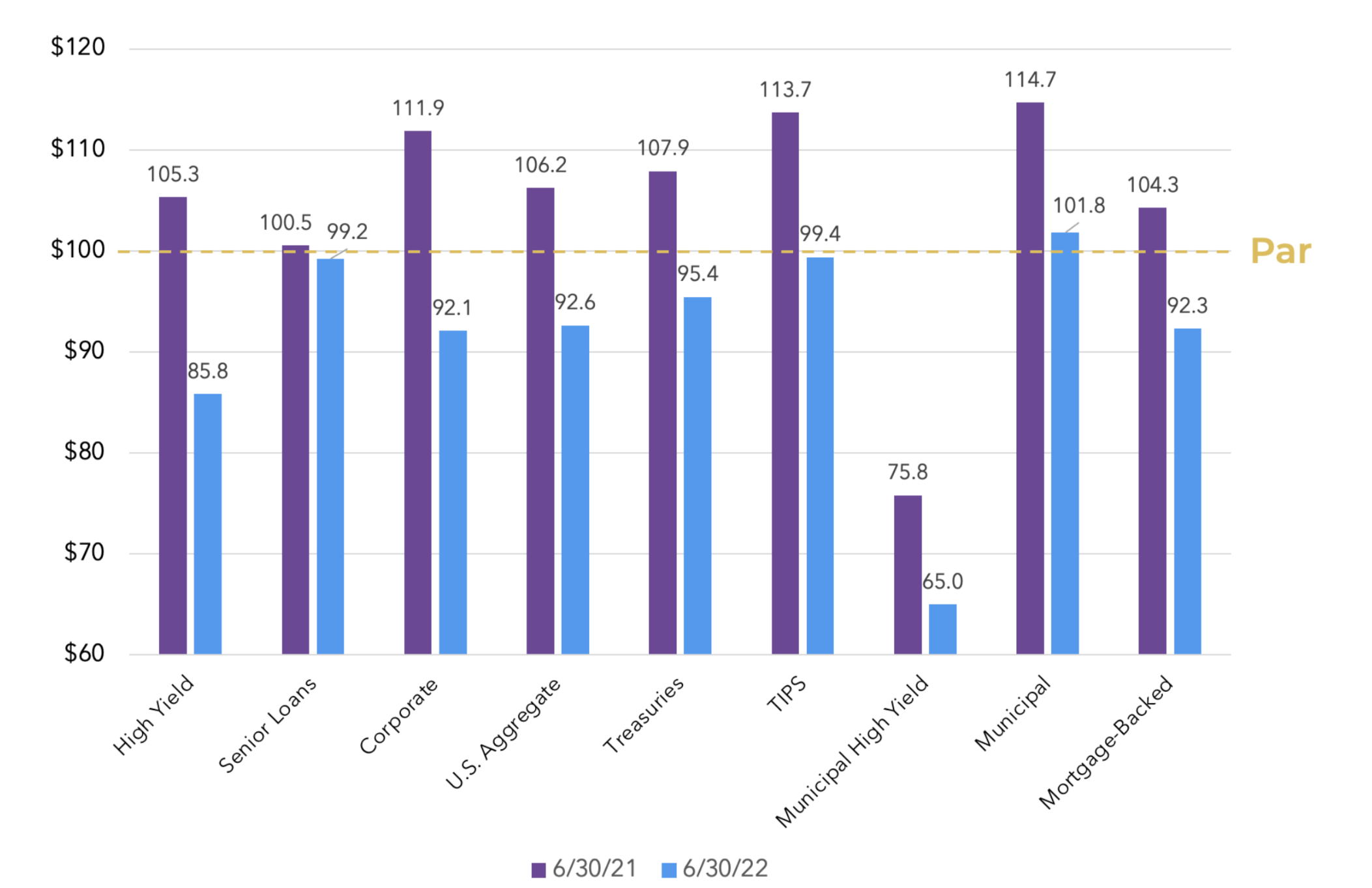 If much of the pain really is over, then the obvious question is when will markets bounce back. This is a tough one because recoveries tend to be deceptive. It’s rare to identify one until it’s over because they tend to be two steps forward, one step back.

That’s why we adjust asset allocations over time based on the economic cycle rather than timing market movements. Since January, this strategy is slowly leading us to position for an economic slowdown in the next 12-18 months. If so, the table above implies an equity market bottom somewhere in the next 6-9 months and leads us to two inescapable conclusions:

1.      Timing a move to cash is a lot harder today than six months ago, and back then it was pretty darn hard.

2.      The pendulum appears to have swung way too far, and opportunity is brewing.

Thank you for your continued support through what has been one of the toughest six months in history. We are working as hard as ever, but keep in mind that we incorporate bear markets into financial plans from the start. That way, we don’t have to risk a financial future by trying to guess when they’ll come and go.