Forecasts are calling for a third quarter rebound of a coincidental 32%. However, a 31% drop is not the same as a 32% gain, and although this V-shape recovery to date has been encouraging, it’s unlikely to persist.

The decelerating economy is just one challenge heading into the end of the year. Arguably the most contentious Presidential election in history is weeks away, and the aftermath is likely to weigh on the minds of investors into 2021.

Almost 70% of U.S. economic activity comes from consumer spending. Meaning, when we go out to dinner, visit a carwash, or get a haircut, the economy is growing. Add in business spending, and these two represent 88% of the $21 trillion economy. One way to forecast spending is to assess both the ability and willingness of consumers, and to a lesser extent businesses, to part with their money.

The third quarter of 2020 pointed to a continued rebound in both. In fact, the ability to spend has arguably never been better. Interest rates are at all-time lows and will likely remain there for several years. Not only is money “cheap,” banks appear to want to lend. This is in sharp contrast to the economic recovery following the financial crisis in 2008. Back then, banks had the capital to lend but were unwilling due to the regulatory environment. Today, those hurdles no longer remain, which should continue to facilitate a faster recovery.

Low rates have also helped to fuel one of the strongest years for corporate mergers and acquisitions in history. This is important because when CEOs of large companies are allocating capital to high-risk endeavors instead of cowering in the corner, it tells investors that they appear to be quite bullish on the U.S. economic recovery.

However, unemployment remains an issue. The U.S. lost 22 million jobs in March and April1. In the five months since then, the economy has recovered 11 million jobs1. This is good, but this pace most likely won’t last. Not all sectors are on the same recovery path, which could slow job creation in the fourth quarter and 2021.

In regard to the willingness to spend, consumer and small business confidence has recovered impressively since May. Confidence fuels spending, and retail sales data confirm that consumers are out there spending money (albeit not like before the recession earlier this year).

The housing market is also contributing to a more willing consumer. The chart below shows that 94% of zip codes had positive house price growth over the last year. 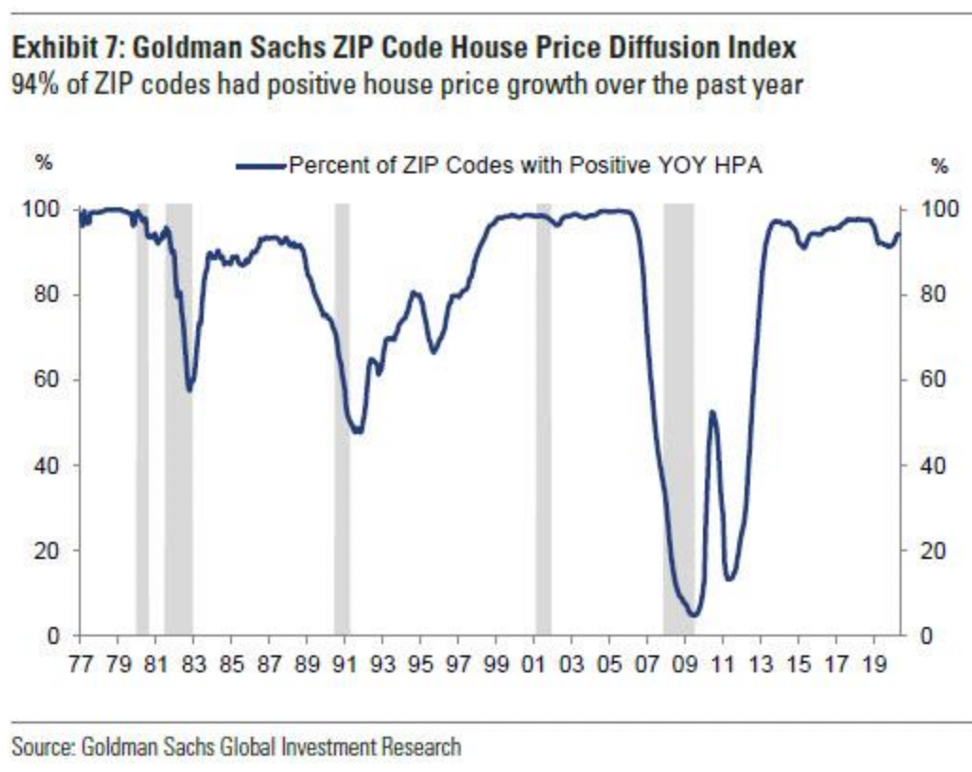 This trend is important because wealthy consumers drive the majority of spending in the U.S., and they also own most of the financial assets. Hence, their attitude towards spending tends to be highly correlated with what they already own. If homes, stocks, and other financial assets are rising, so should their net worth and confidence about their future.

Add it all up, and these factors suggest the U.S. is still in the early stages of an economic recovery. The sharp reversal in many of the data supporting these factors explain why we’ve seen a V-shape recovery since May. 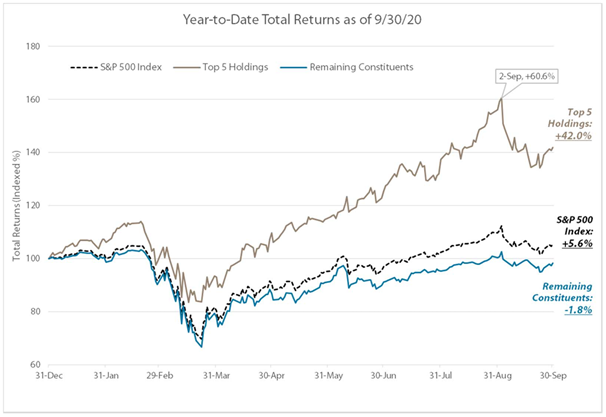 Equity markets took two steps forward (July and August) and one step back (September) during the third quarter. The strong performance over the first two months led to a string of records in the S&P 500. The index fell only 12 days and delivered a 12.7% gain through July1.

Then September reminded investors why it has historically been the worst month to own stocks. Stocks that had been soaring, most notably in the technology sector, reversed course. The ensuing selloff was so severe that the tech-heavy Nasdaq Composite fell over 10% in just three trading sessions after hitting an all-time high (the fastest decline on record)2.

However, the Nasdaq still gained 11% in the third quarter and 45% over the past six months (its biggest two-quarter gain since 2000)2. The S&P 500 ended up 8.5% with all sectors in positive territory except energy, which fell over 20%2. Given the state of the economy, the continued strength of the S&P 500 has baffled many investors this year. How can this barometer for the stock market keep hitting all-time highs when so much of the economy remains challenged?

The answer lies in the composition of the S&P 500. Bigger companies are carrying more weight. As of September 30th, just five stocks represented 22.6% of the total size of the S&P 5001. The chart above visualizes just how wide the bifurcation has become between these five (up 42%) and the rest of the index (down 1.8%). Combine these two cohorts together and the entire S&P 500 index is up 5.6%. Meaning, just five stocks are accountable for not only keeping the index in the black but fueling an impressive total return in only nine months.

In fact, it’s hard to find a time in history where there has been such a bifurcation between the haves and have nots in the S&P 500. This disparity makes any earnings forecast and/or quality assessment for the broader index very difficult. Several companies have even suspended forward guidance on earnings. If management doesn’t have a clue what the future holds for earnings, investors likely have no shot.

Fortunately, earnings matter a lot less when the most powerful financial force in the known universe is supporting the stock market. What’s also great about the Fed is they just tell us what they plan to do. We don’t have to guess or forecast or do much thinking at all. Fed Chairman Jerome Powell told the world everything we need to know following the Fed’s June meeting3:

That’s not a copy and paste error either. He literally said “thinking about” twice in a row. As in, the thought of raising interest rates is so far out that it hasn’t crossed their minds to even start thinking about it yet. If the Fed holds true to their word, then stocks could very well go a lot higher (irrespective of what happens to earnings).

The bond market was back to boring in the third quarter. The Bloomberg Barclays U.S. Aggregate Bond Index (AGG), which is the de facto benchmark for the bond market, returned just 0.6%1. But the index is up 6.8% year-to-date to end September1, and this could create challenges down the road.

But selling all bonds could cause more problems than it solves. As the saying goes, a bad day in stocks is a bad year in bonds. Most investors own bonds for income and diversification, and just because some bond index is trading at a premium does not imply the entire fixed income market is doomed. Instead, it suggests taking a more active approach predicated on fewer constraints and finding managers skilled at navigating these risks that may lie ahead.

Larry Summers is a former president of Harvard, Treasury Secretary, and National Economic Adviser. He is closely followed and known for being outspoken. Back in April, he said the following in an interview with Vanity Fair5:

This is a thoughtful analogy and one that has played out in many ways. Gross Domestic Product (GDP) is a measure of economic activity, and it fell at an annualized rate of 31.4% during the second quarter6. This is the largest drop in a single quarter dating back to the Great Depression.

Forecasting firm IHS Markit estimates GDP will increase at a 32.2% annual rate in the third quarter (the initial reading will be released at the end of October)6. While this number may look identical to the decline experienced in the second quarter, these are not the same.

If an investor starts with $100, loses 32% and then gains 32%, he is left with $89.76. So, even if their forecast ends up being right, it won’t mean the economy will be back to normal by Thanksgiving (not even close). Schools across the country remain partially open. Several airlines are still restricting passengers from booking middle seats. Disney is threatening to lay off 28,000 workers and close Disneyland in California7.

There are hundreds of these examples that suggest a slower recovery ahead. If there is anything close to a 32% annualized rebound in GDP in the third quarter, that will represent the low hanging fruit - the part of the economy that went away simply because the government mandated it. But there are still a lot of terrified consumers out there and some businesses that are not allowed to operate (like Disneyland).

What’s left of the economic recovery will take more than just opening doors to come back. This is going to require human behavior to change. That takes time, but it’s also ok. Decelerating economic growth is still economic growth. Investors should cheer ever tiny bit of progress that is reported going forward.

Lastly, all eyes will soon be pointed at the Presidential election. Once the winner is announced, pundits will fill the airwaves with their “plan” going forward and how they plan to position their investments. Don’t forget that politics and policy are not the same. Americans have been subjected to politics for the last 18 months on the campaign trail, and this is ending soon.

From there, policy takes over, and nobody will really know the winner’s policy agenda until well into 2021. Tack on the time it takes to enact policy in this country, and we are years away from any structural shift in the economy as a result of the election.

The bottom line is that investors will probably be dealing with more uncertainty than normal through the end of the year, but these periods tend to be when opportunity presents itself. We will do our best to keep our eyes open and thank you for your continued support.