The economy continued to print numbers in the third quarter that during any other time in history could be mistaken for typos. On a relative basis, we haven’t seen growth like this since post World War II.

But high growth rates on large numbers like the size of the U.S. economy don’t last. They mathematically cannot, but long-term investors should welcome slower growth because it’s more sustainable.

However, it’s unlikely that the next phase of this bull market will be a smooth ride. Fed tapering, political insanity in D.C., and resetting expectations for future growth could quickly remind investors that stocks are volatile.

The staggering inflation during the first half of the year retreated somewhat in the third quarter, but that’s only the headline number. Dig deeper and supply chain issues remain, and they are crippling the global economy. For example, the chart below depicts the cost to ship a container from China to the West Coast over time. 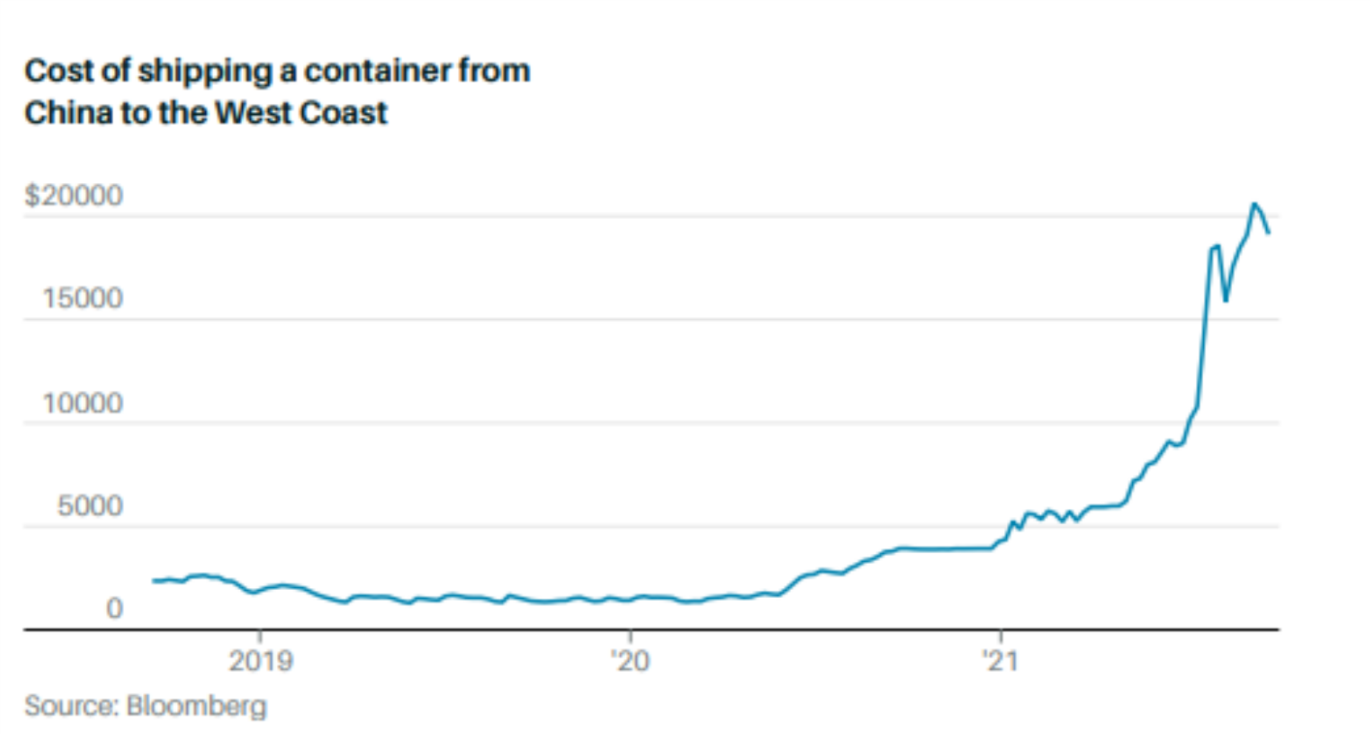 While some indicators suggest that shipping rates may have already peaked, it’s harder to determine if and when they will to normalize. Add in the 34% rise in the money supply since February 20201, and there’s virtually no chance that all inflation in the economy is “transitory.”

The Fed has also been buying $120 billion in Treasury bonds and mortgages every month since March 2020 (referred to as “Quantitative Easing”), and they announced plans to taper this buying beginning as soon as November and ending mid next year. This is a good step for the economy. We don’t need the Fed manipulating the bond market anymore, so it’s time to start tapering these bond purchases.

What was surprising from the Fed’s meeting in September was their language hinting at raising rates sooner than some investors (like us) expected. Half the voting members expect to raise next year, but let’s unpack this prediction because it’s a lot less aggressive than it may sound:

1.    The Fed will want to complete tapering before they raise rates. This puts the starting point for the first rate hike around July next year.

2.    If so, that leaves 4-5 months before midterm elections next November. The Fed may want to wait until after elections to start messing around with interest rates.

3.    Two voting members who want to see rates rise next year are retiring. Biden wants what every first term president wants, which is a second term. That’s at risk if the economy dives, so Biden will likely pick replacements who prefer to keep rates lower for longer.

4.    The first interest rate hike is only going to be 25 basis points, or 0.25%. This will likely be immaterial other than the impact on psychology.

Simply put, we are years away from an interest rate hike impacting the economy.

Ending with the labor market, while job growth moderated during the quarter, gains across the board were still seen each month. In total, 1.4 million jobs were added (over half of those occurring in July).  This brought the unemployment rate down from 5.9% in June to 4.8% as of the end of September2.  That’s incredibly fast, but the chart below shows we are still about 5 million jobs away from where we were before the government shut down the economy in March 2020. 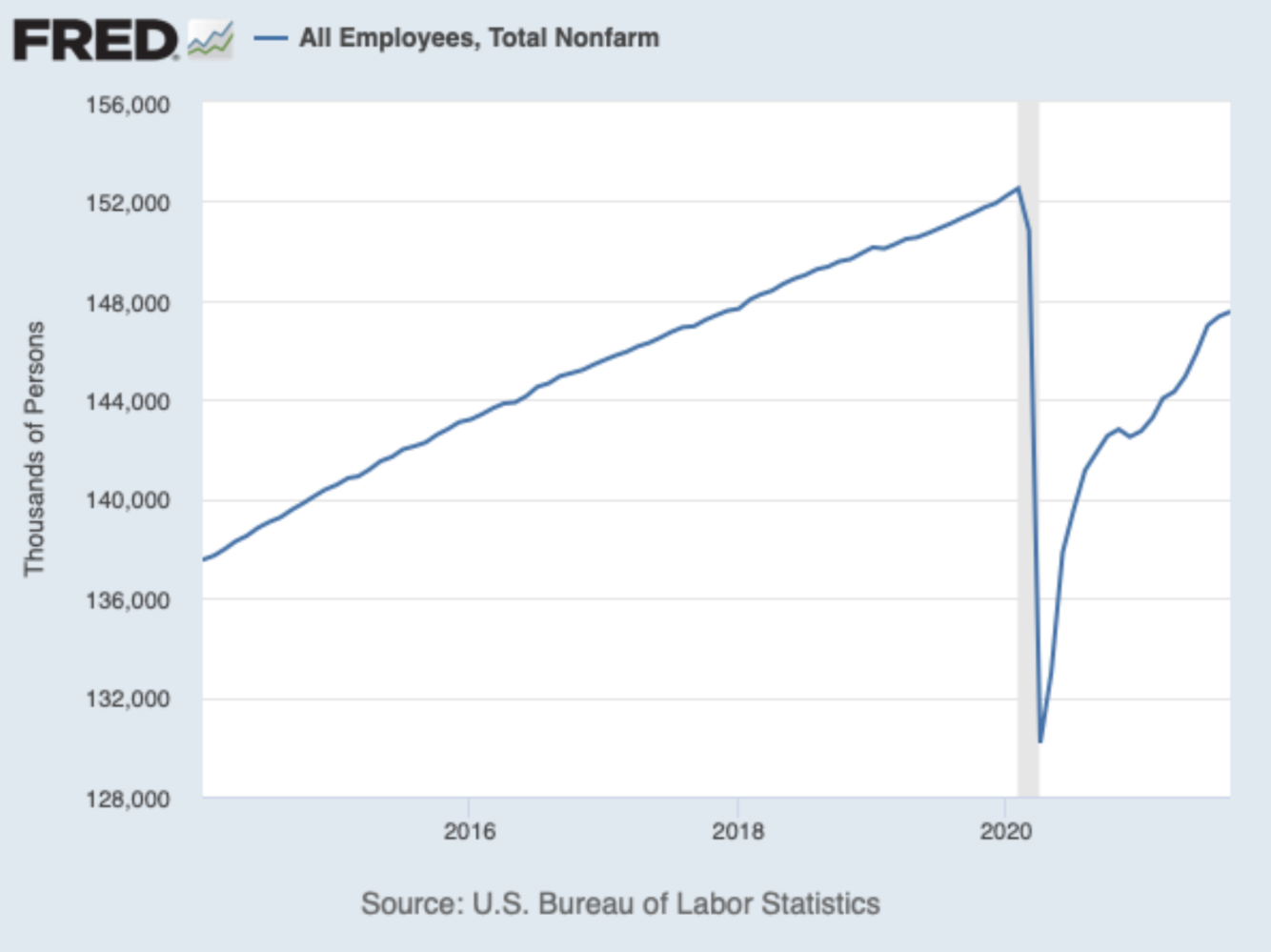 The next chart is where this story gets more interesting. There are 11 million job openings today. If the country is 5 million jobs away from getting back to “normal,” then there is currently way more demand for workers than what’s needed to get back to normal. 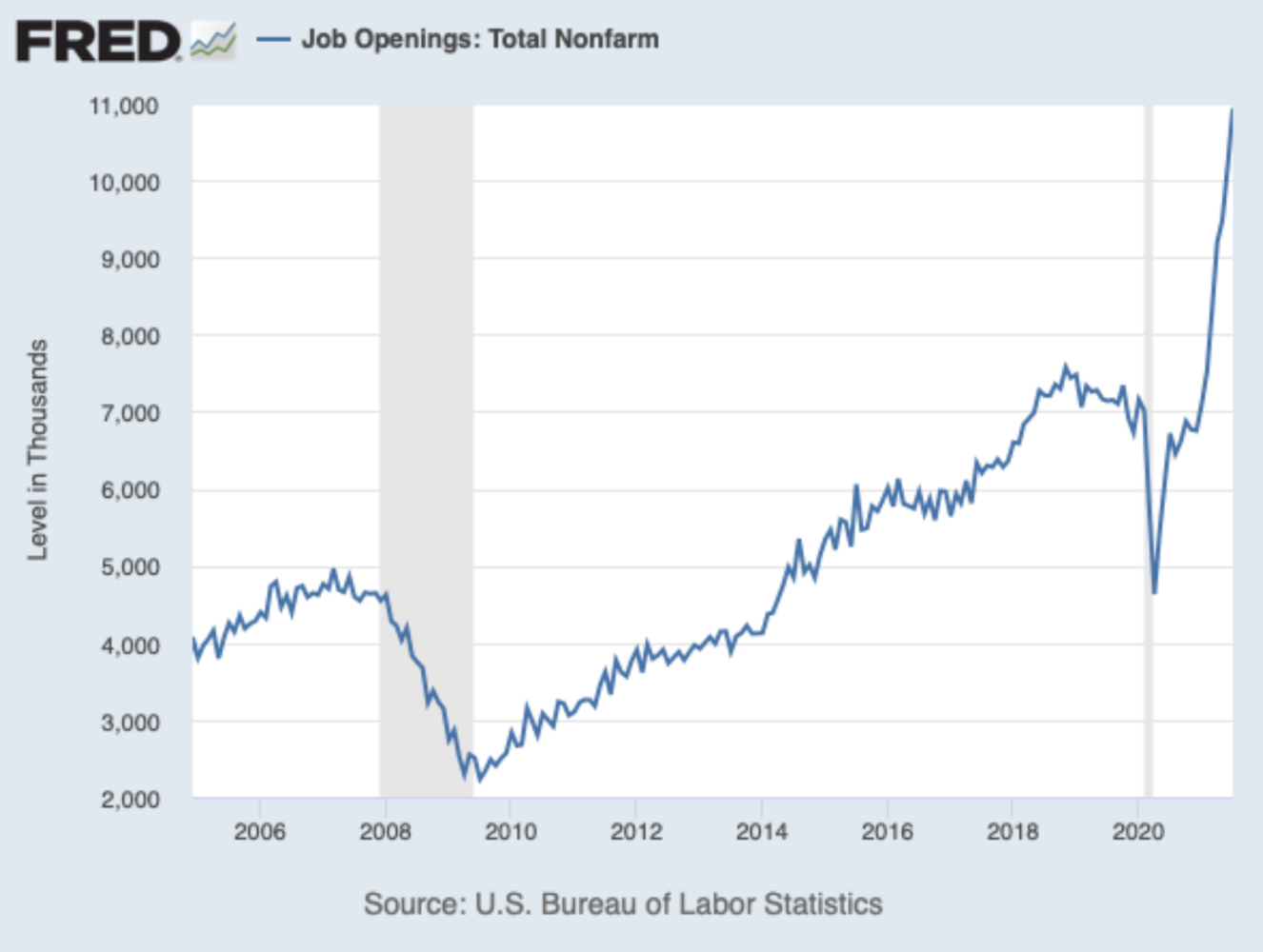 That’s a good problem to have, but it’s still a problem. Companies are turning away business because they can’t find workers, and that’s leaving money on the table. Perhaps now that the generous unemployment benefits have mostly expired, more of these jobs will get filled.

But markets don’t run on calendars, so any insight gained by looking at them is at best coincidental. The real driver of stock prices over the long run is corporate earnings, and we’re about to find out if these can continue to beat expectations as third quarter earnings season begins next week.

The question is if supply chain disruptions and the delta variant pressured profitability. While this question is certainly relevant, we’re far more focused on the future than the past. Hence, we will instead be looking for any evidence to suggest when recent growth rates will begin to moderate (more on this below).

The other financial market that remained squarely in the headlines for most of the quarter was the energy market. Crude oil is up 125% since the end of last October (7-year high), and U.S. natural-gas prices are up 150% this year (13-year high). Heating oil has risen 68% this year. Prices at the pump are up nearly a dollar over the past year to a national average of just over $3 a gallon. Coal prices are even at records5,6.

The story is much the same for most of these commodities – unexpected demand and tight supplies. But this time around, it’s risking power crises in China (the world’s second-largest energy consumer), India (fourth largest), and other parts of the world7. The timing couldn’t be worse as these economies prepare for cold weather.

These dynamics have propelled the energy sector to be the best performing one in the S&P 500 this year (advancing 54%)3. However, we view this as little more than a “catch up” trade, and we prefer to avoid making bets on the future direction of energy prices. We also remain skeptical that drillers can stay disciplined and question what innovation this sector can bring to a world already dominated by more vibrant segments of the economy.

Economic growth has been unprecedented over the last 18 months, but that’s because last year’s recession was artificial. The excesses that typically fuel recessions were not the culprits but rather the government flipping a switch and forcing people to stay at home. Hence, the chart below is not too surprising (in hindsight): 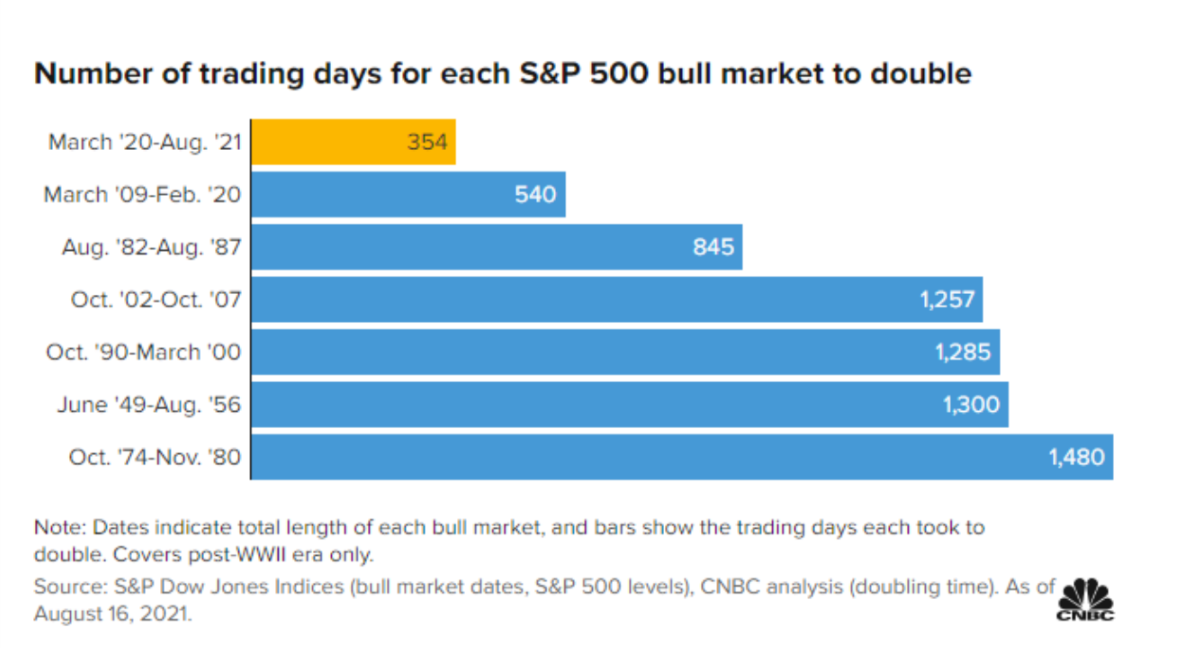 But the law of large numbers states that a large entity growing rapidly cannot keep growing at the same rate forever. This observation explains why even big tech can’t double in size every year in perpetuity. It’s also the reason why we expect growth in the economy and corporate profits to start slowing in the fourth quarter.

To be clear, the economy will likely keep growing, but at a slower pace than over the last year (decelerating not declining). It’s just mathematically implausible to continue to see current growth rates last much longer, but that’s not necessarily a bad thing. For example, here’s an excerpt from Brian Wesbury’s blog at First Trust (emphasis added)123:

“The key problem for real GDP is that the massive and unsustainable fiscal stimulus and income support that happened during COVID pushed retail sales well above the pre-COVID trend.  Retail sales in July were 17.5% above the level in February 2020.  To put that in perspective, in the seventeen months before COVID, retail sales were up 5.1%.  There is only one way retail sales can grow 3x its normal rate while millions are unemployed and the economy was locked down – the government pulled out the credit card.”

Consumer spending and retail sales are 70% and 30% of economic activity respectively123. If these start to materially slow now that the government is putting away that credit card, then it’s hard to imagine how the rest of the economy can pick up the slack.

That being said, there’s little reason to fear slower growth rates. This is how math and physics work, and long-term investors should prefer slow and steady growth any day of the week and twice on Sunday versus what we’ve experienced over the last 12 months because it’s more sustainable. But this normalization could lead to even more volatility and other bumps along the way.

To be even more abundantly clear, we’re not suggesting even the slightest bearish tone. No alarm bells are sounding. All we’re saying is that the last year has been magical for stocks, and some of that pixie dust could start to go away. If so, slower economic growth precedes slower corporate profit growth, which means less fuel for stocks.

Fortunately, there’s already enough fuel for stocks, and one big source is that there’s nowhere else to go. Cash investments continue to lose money safely (thanks to inflation), but so does a lot of the bond market. Take the current 10-year Treasury yield at 1.56%, then subtract inflation, and the result is not only negative but it’s almost as low as it’s ever been. It also hasn’t been positive in almost 20 months!

Here’s why this data point matters. Go back to 1983, combine all the days when the inflation-adjusted yield on the 10-year Treasury bond is 1.67% or higher, and the stock market had a negative return. Treasuries are less risky than stocks, and when their yields rise, the higher returns attract assets away from the stock market. But when the inflation-adjusted yield has been 0.00% or lower, then the stock market has delivered an average return of more than 38% per year because most investors prefer to earn something after inflation8.

The bottom line is that even though growth may be slowing down over the coming months, There Is No Alternative (TINA) to stocks. Thank you for your continued support, and let’s hope that history repeats itself and delivers a profitable end to yet another dramatic year.