The Gloves Are Off

One of the most contentious presidential elections in modern history is less than two weeks away, and there is no shortage of punditry flooding the airwaves. Supporters from both sides are using historical stock returns to explain why their candidate is the best option for investors.

History only happens once, so it’s strange to think that Republicans and Democrats can use the same stock returns to derive two very different conclusions. Let’s analyze the data to see how this is possible and determine for ourselves which side has done better during past election cycles. 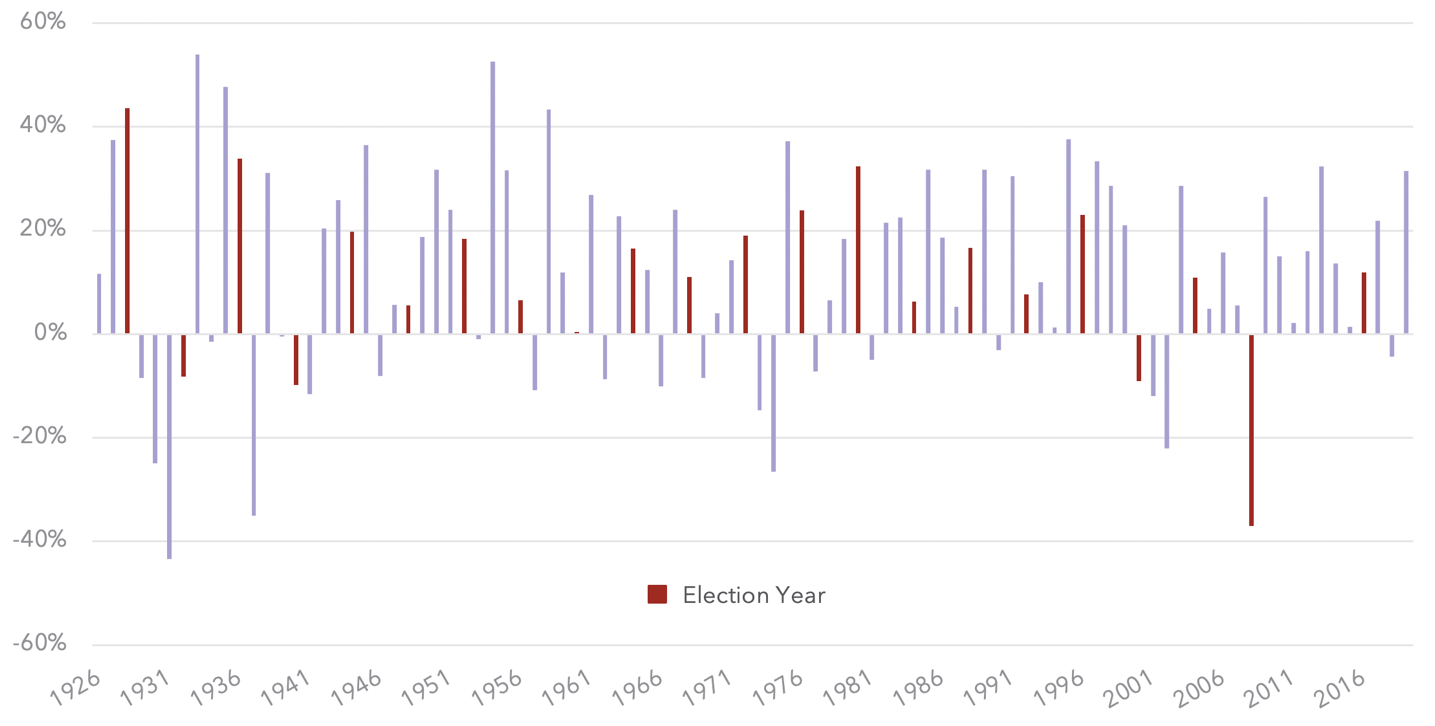 The Democratic candidate won in each of these except 2000, so the Republicans could argue that they have done better.  However, three of these years were in the midst of some of the worst economic downturns in our nation’s history. It’s unlikely that a Democratic win caused the Great Depression (1932), the dot-com bubble (2000), and/or the financial crisis (2008).

In fact, if an investor was only using historical returns to decide whether to buy or sell during an election year, the data in this chart overwhelmingly suggest buying - irrespective of the winner. If only four years were down, then 18 years were either flat or positive. That’s 82% of the time over the last century. Not too shabby.

Since this analysis neither helps nor hurts either party, it’s time to move on. The table below takes the same data over the same time period and computes the average return in election years for both parties. 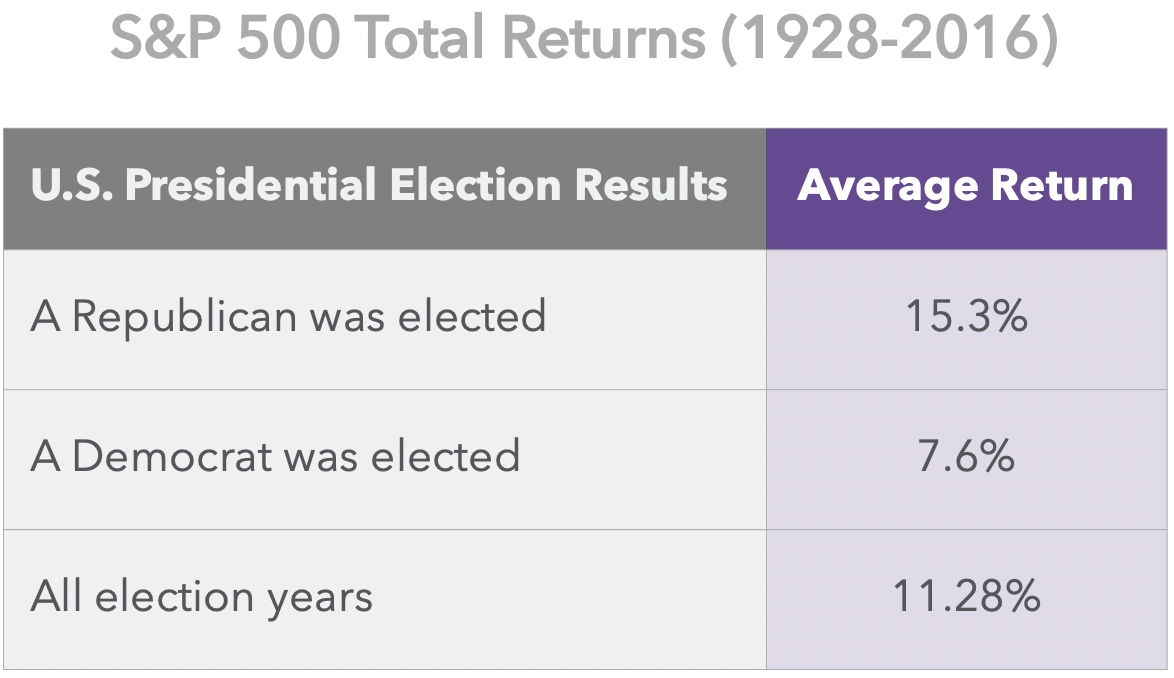 Here, the Republicans appear to be the winner because the average return in the S&P 500 has doubled that of the Democrats. But the Left could argue that an election year is an unfair comparison. The election is in November, not January, so it doesn’t make sense to judge the stock market on a candidate that hasn’t even been sworn into office yet.

They could counter using the table below. These are the average party returns of the S&P 500 during the first year of a presidential term (after they were sworn in). 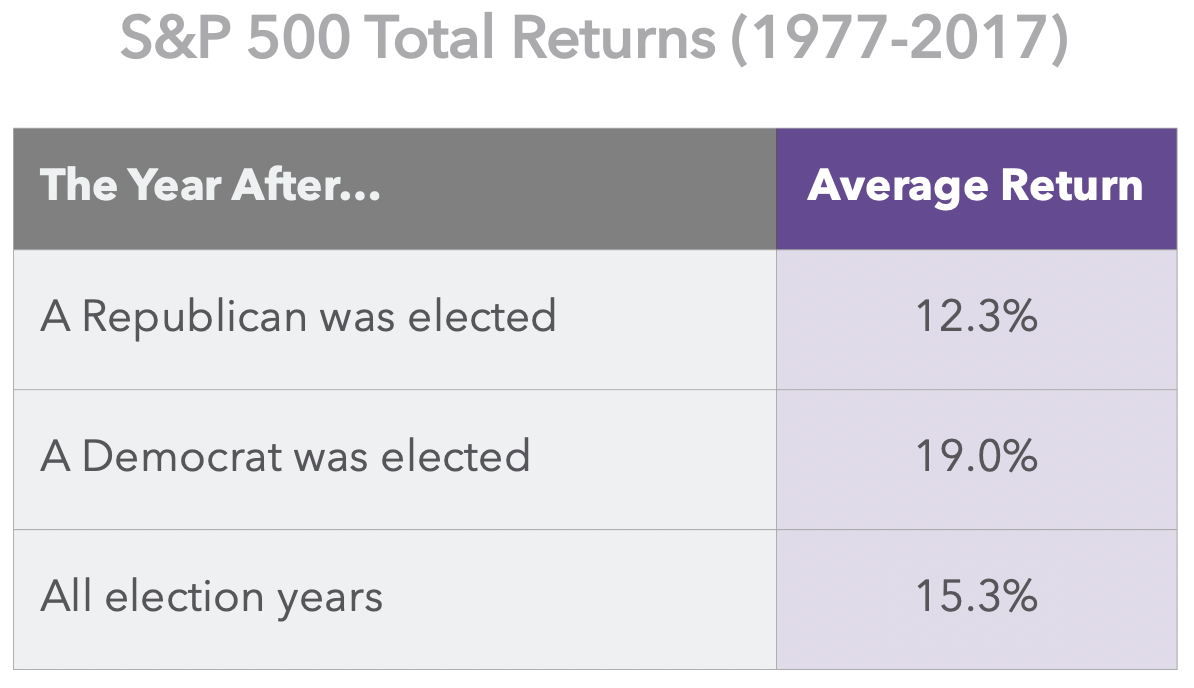 The Democrats could respond by arguing that one year isn’t enough time to make the case one way or the other. Besides, the first year is just cleaning up the mess of the old administration, right? They could point out that since 1945, the S&P 500 gained 11.1% during Democratic presidencies and only 6.8% during Republican ones2.

Let’s stop here because this back and forth can go on forever. Historical stock returns can be sliced and diced a thousand different ways until the results confirm whatever preconceived conclusion either party is trying to support. But in reality, most of these conclusions are baseless.

Investors succumb to dangers hidden within statistics because they carry powerful psychological triggers. It’s human nature to assume statistics are absolute, but too many self-interested pundits employ deceptive practices to drive agendas. They put the cart before the horse by first deriving the conclusion that fits their narrative and then analyzing (often massaging) the data under various lenses until they confirm what it is they hope to achieve. It’s the exact opposite of a sound statistical analysis. The data should always drive the conclusion - not the other way around.

Data abuse is not relegated to just politics. It’s literally everywhere. Read How to Lie With Statistics, by Darrell Huff, to learn why we must take the time to question any published statistic. This book was written in 1954, but the schemes unveiled remain prevalent today (it can be read in a few hours and involves very little math).

The chart below is another example of the dangers hidden within faulty statistical analysis. Upon first glance, this chart depicts an incredibly strong relationship between the divorce rate in Maine and the per capita consumption of margarine during the 2000s. However, it is more likely that this is coincidental, and any relationship between the two is spurious.

For this reason, be very skeptical of any stock or economic chart that shows two lines next to each other, or in this instance comparing S&P 500 performance to whoever is sitting in the Oval Office. Just because two things happen at the same time doesn’t mean they are related.

Simply put, when it comes to statistics, consider them guilty until proven innocent.

“There are three types of lies – lies, damned lies, and statistics”

If there is a reliable statistical relationship out there that says one political party is consistently better for stocks than another, I haven’t found it. I’d even wager it doesn’t exist for two reasons.

First, there haven’t been enough elections to build a large enough data set to derive a conclusion with a high degree of confidence. Second, it’s virtually impossible to imagine how any statistician could isolate the election from the several thousand other variables that drive stock prices and observe it in any meaningful way.

When it comes to understanding the impact of Presidential elections, long-term investors only need to spend about 30 seconds analyzing these two charts. The first shows that stocks have risen consistently over the last century under both administrations. The second shows that stocks have also fallen sharply under each administration. That’s it. The bottom line is that no matter what either political party may preach, they are just one of many inputs into stock prices. 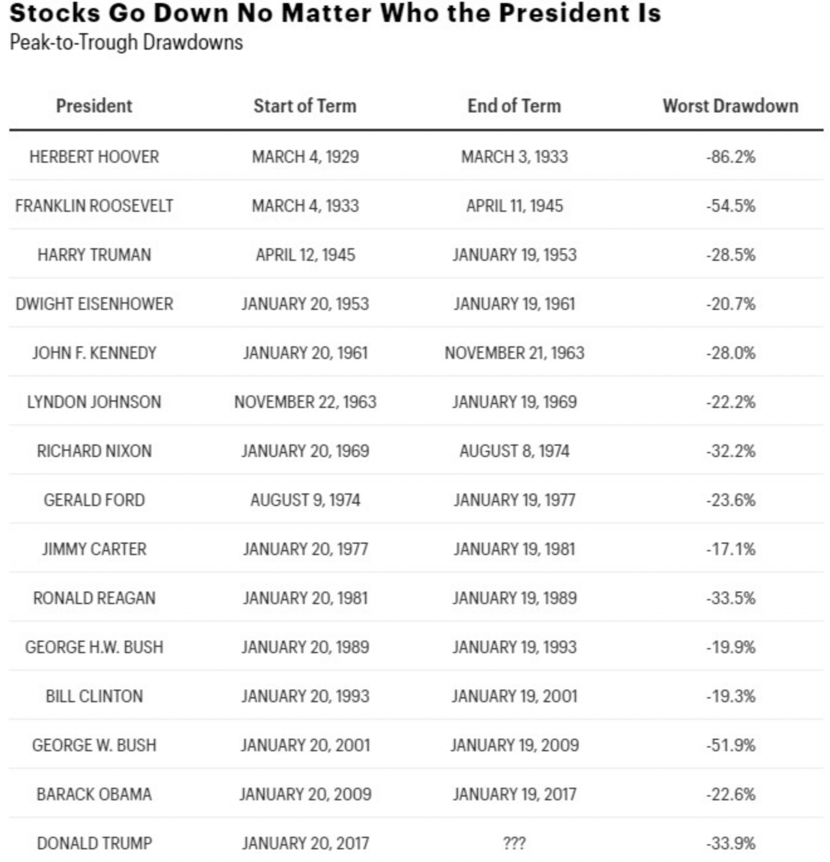 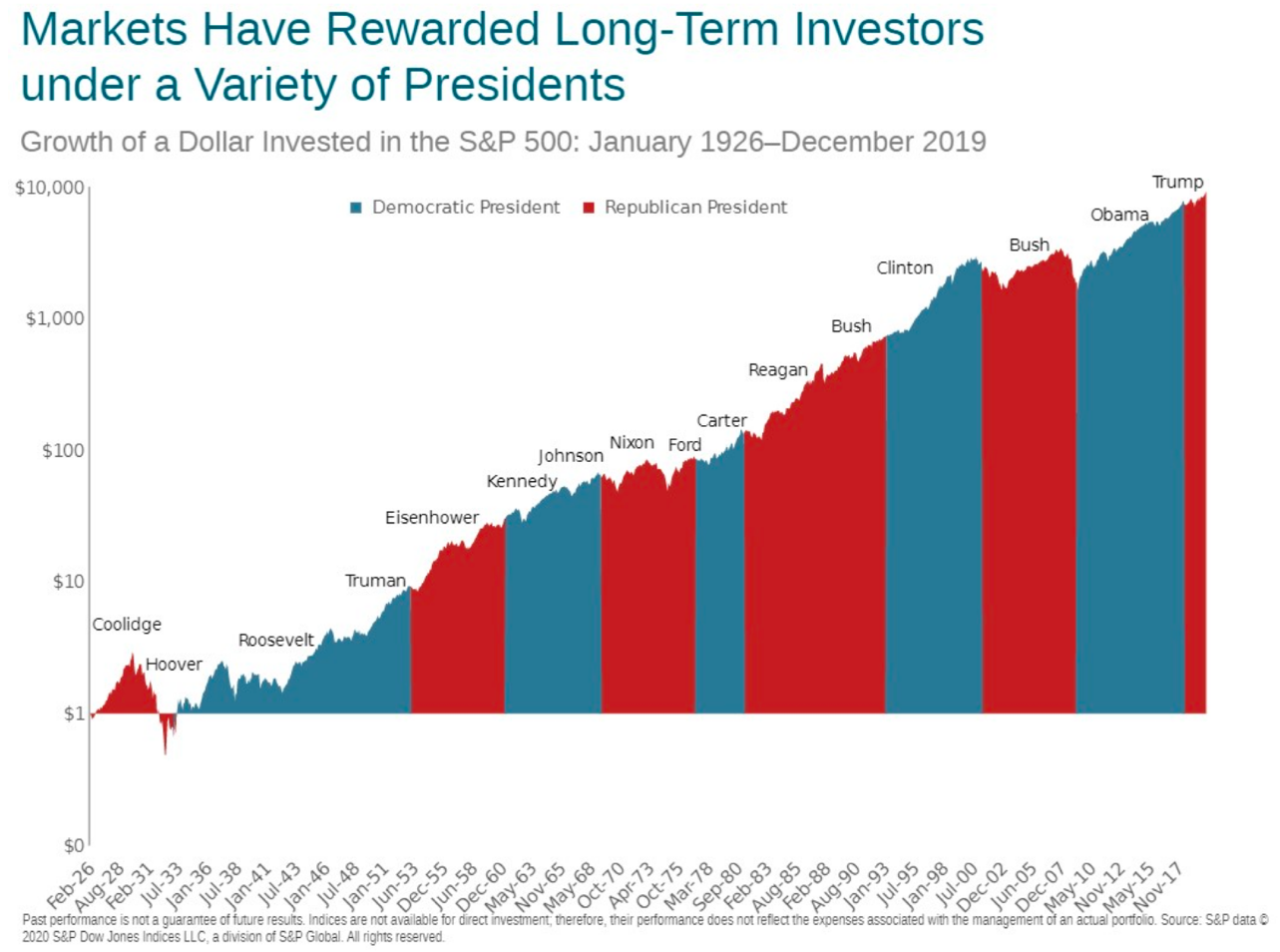