Wall Street appears to be unanimous. A recession is in the cards for next year, and there’s no way around it. While there is certainly a case to be made to support this consensus view, what if they’re wrong?

According to Wall Street, a recession next year appears to be a foregone conclusion1. Forecasts for the economy and the stock market haven’t been this bearish in a while, and there’s a long list of reasons supporting this negativity.

The housing market is already in a recession, earnings growth appears to be slowing, stories of mass layoffs are a weekly event, the stock market has been hammered this year, and closely-followed recession indicators like yield curve inversions have been signaling for months that things could get worse.

But what if Wall Street is wrong? What if these signals don’t work the way they used to? What if the Federal Reserve can bring down inflation next year while avoiding a recession (aka “soft landing”)? As improbable as it may seem, there is compelling evidence to suggest the odds could be higher than what consensus believes today.

For starters, inflation appears to have peaked months ago and has since been moderating. In November, prices paid for manufacturing components fell to a 30-month low, and rents fell 1% (the third straight monthly decline). Furthermore, shipping rates for freight containers have fallen 77% since last year, fertilizer is down 43% since March, crude oil is flat for the year, lumber is down 78%, chicken prices are down 70% since June, etc2,3. Falling input prices could start impacting prices on the shelves relatively soon.

Second, employment remains strong. The unemployment rate remains close to historic lows, and there are still 1.6 jobs available right now for every person looking. Most encouraging is that wage growth is rising. During November, wages grew 0.6%, double what Wall Street was expecting (more on this below)4.

Third, the economy continues to grow despite the most aggressive rate hike cycle in four decades. Gross Domestic Product (GDP) is a measure of economic activity, and it was recently revised higher for the third quarter from 2.6% to 2.9%5. The driver of this growth continues to be consumer spending. This alone accounts for 70% of the U.S. economy, and it’s held up surprisingly well all year.

But what’s more telling is how the money is being spent. During the lockdowns, people bought TVs and other goods because they couldn’t leave their homes. But the U.S. economy is predominantly services-driven. We typically spend most of our money on eating out, travel, haircuts, etc. Since the economy reopened earlier this year, there has been a massive shift in spending back to these services, and this momentum is showing little sign of slowing down.

To summarize, if the Fed can bring down inflation without causing too much damage to employment, then a soft landing is on the table. The key to success lies in the chart below. When the purple line is above the blue line, “real” wealth is created because wages grow faster than inflation. But when the blue line is above the purple, wealth is destroyed. 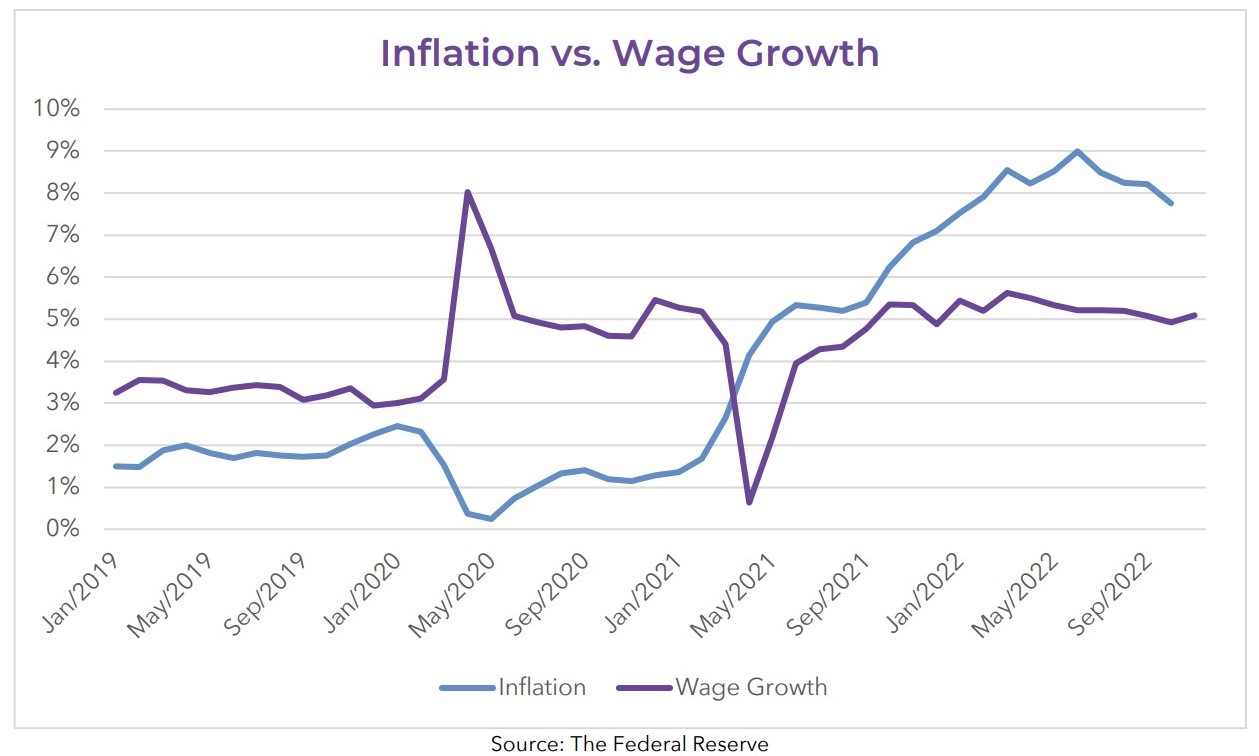 As the saying goes, it’s not how much you earn but rather how much you keep. Inflation is a tax, so workers have seen less since the two lines intersected back in March 2021. The Fed’s primary goal right now is to revert this trend and get that purple line back on top. That would indicate prosperity is returning to the American consumer.

To be clear, we expect the economy to continue to slow down. We view ourselves as conservative investors, and as such, we try to plan accordingly. But we’re also very much contrarian, and when everyone seems to be positioned in one direction with unwavering confidence, we instinctively question why nobody is looking in the other direction. That’s one reason we haven’t shut the door to the possibility of a soft landing.

Because consensus isn’t always right. Think about how many times low-ranking teams make it to the Final Four. How many polls predicted that Hillary Clinton would lose to Trump? Or what about that “red wave” through Congress that was supposed to happen a few weeks ago? And don’t even get me started on weather predictions.

But don’t take my word for it. George S. Patton said it best:

“If everyone is thinking alike, then somebody isn’t thinking.”

Another reason why we are keeping an open mind is that even the most successful investors are wrong more often than they are right. The best ways to hedge this risk are to continually test assumptions, diversify, and never go “all in” on a call. That’s why we employ risk controls and guardrails in our asset allocations – so our convictions don’t get the best of us.

The bottom line is that economies and financial markets are not governed by Newtonian physics. There are no preset rules or certainties, so while a soft landing may be difficult, it’s not impossible either.