The chart below shows that the first six months of the year was one of the worst ever for the stock market - the 11th worst to be exact (blue shaded row halfway down). However, since June 16th, the stock market has rebounded sharply. In fact, July was the best month for the S&P 500 since 2020, and it was the 5th best month in 30 years1. The index is up 13% since the mid-June low, and the tech heavy Nasdaq 100 is up over 20%. This begs the question if mid-June was a bottom for stocks, and there’s evidence to suggest this could be the case. 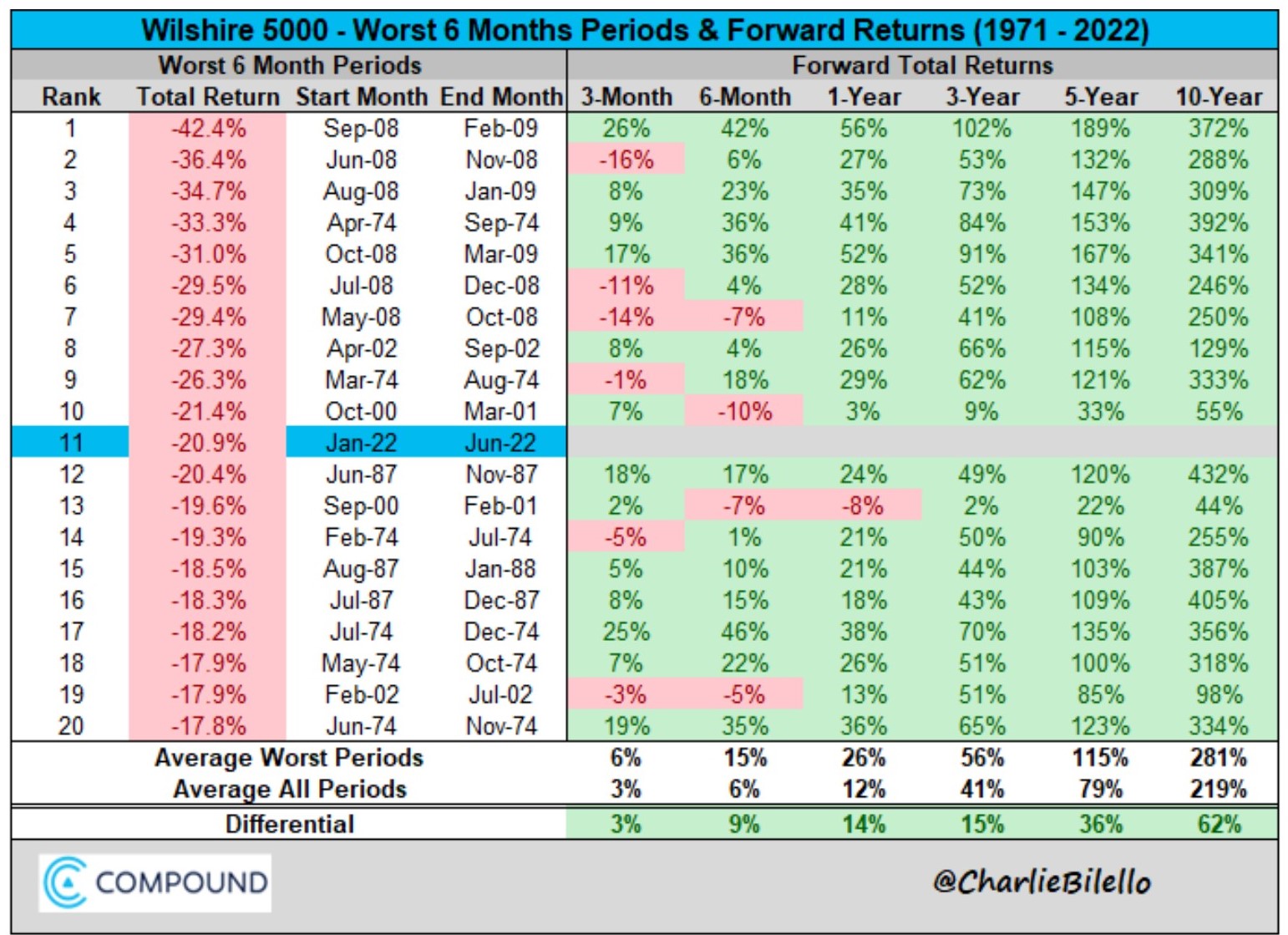 First, there’s a good chance that inflation has already peaked. Gasoline prices have fallen dramatically in just one month from $5.02 a gallon down to $4.162. Wheat is down over 37% since mid-May and corn is down 27% from mid-June. The cost of shipping goods from East Asia to the U.S. West Coast is 11.4% lower than a month ago3. Business surveys also point to easing price pressures and improvements in backlogs and supplier delivery times - suggesting that the supply chain is healing.

Money supply growth is also slowing. During the prior two years, the money supply grew at an 18.4% annualized rate. That’s three times faster than the long-term average of 6.2%4. The net effect was a 40%+ increase in the amount of money in circulation, and it’s been arguably the biggest driver of inflation.

This year, the money supply is growing well below average at 1.7% annualized, and this is good. Since the government can’t take back the stimulus checks (property rights prohibit such a move), the only way to get the money supply back to “normal” is to grow slower than the long-term average.

Falling inflation is important because it should signal to the Federal Reserve that the economy is slowing down and there’s less reason to raise interest rates higher. If so, they may execute that “soft landing” they’re so desperately trying to achieve and avoid a deep recession.

Second, the chart below suggests that there’s blood in the water and lots of it. In layman’s terms, this chart is depicting capitulation - how many investors have thrown in the towel measured by the percent of companies trading below the value of cash on their balance sheets. 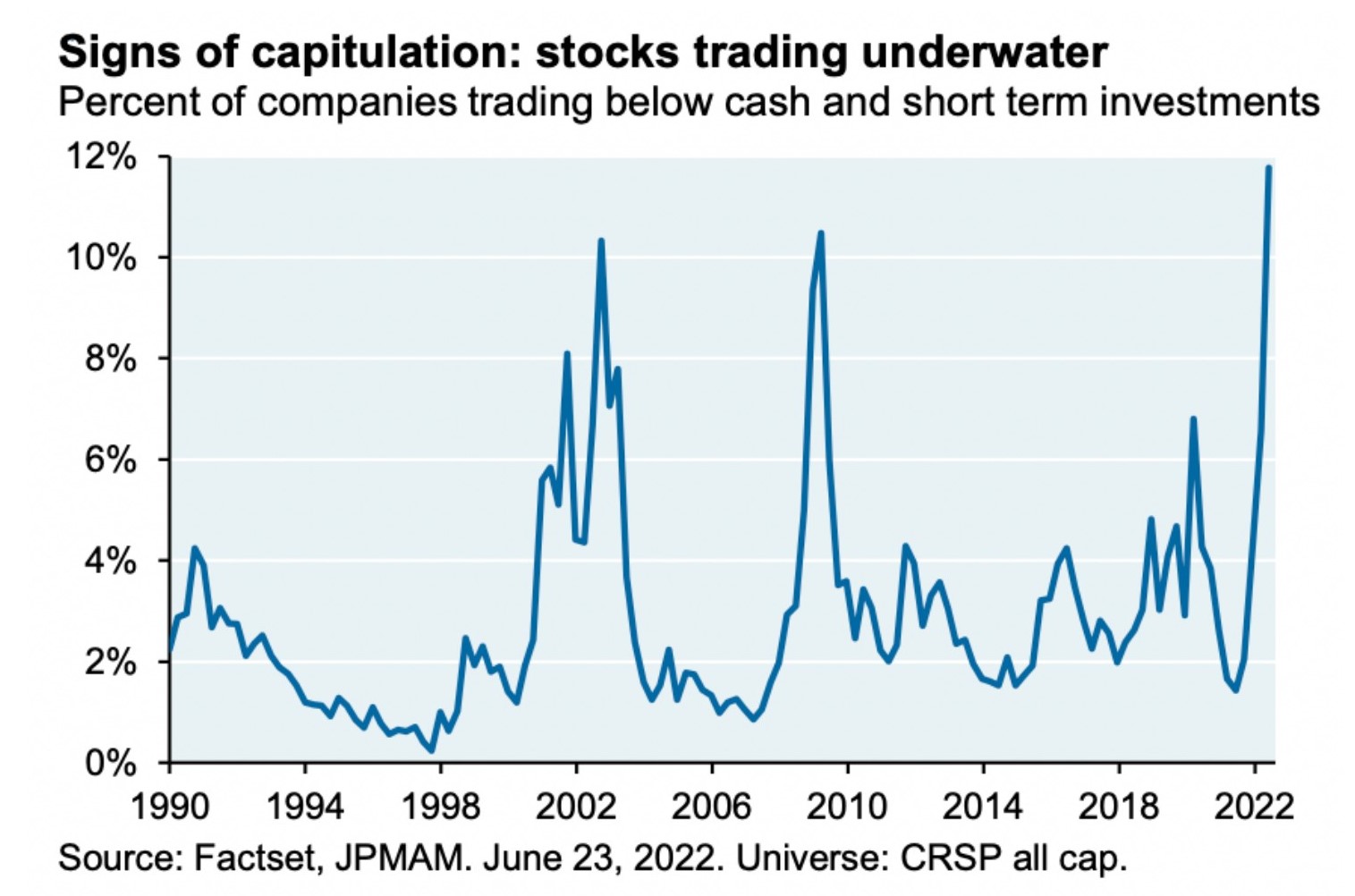 Here’s another way to think about this concept. If someone were to buy any one of these companies, they would pay less than the total value of the cash sitting in its bank account. This makes zero sense, and the fact that it’s at a three-decade high suggests that many of the would-be sellers have already left the market.

Third, there are clear signs of a sentiment shift. Negative news during the first half of the year absolutely crushed stocks, but over the last month or so, that’s changed. Companies that are reporting slowdowns, layoffs, and challenges with inflation are now experiencing stock price increases. For example, high growth stocks like Shopify, Coinbase, PayPal, Robinhood, SoFi, and even the ARK ETF hit new recovery highs during this week’s rally despite mixed earnings/news.

Perhaps too much negativity got priced in and/or the stock market is now anticipating an economic recovery. Hard to say, but even traders are already betting that the Fed will start cutting interest rates as early as next year. If they are right, perhaps this economic slowdown won’t last that long.

Let’s assume for a minute that June 16th was in fact the bottom. Ok great, but that doesn’t imply that all the pain is over. The stock market and the economy are not the same, so even if we see a recovery in stock prices, the economy could continue to slow down further or even dip into a recession.

In fact, that’s usually how it goes. The stock market tends to bottom 6 to 9 months before the economy does. If so, we could be in for more economic pain over the coming months. But just as the stock market anticipates an economic bottom, it also prices in the recovery before it happens.

Go back to the table above and take a look at the “Forward Total Returns” columns for the “Average Worst Periods” row near the bottom. The average 6-month return is 15% and the 1-year is 26%. These are staggering returns, and they began accumulating not when the economy was recovering but rather when it was still contracting.

The table below extends this analysis by quantifying the return between the time the equity market bottomed and the economy bottomed. For example, during the financial crisis (second row), there were 122 days between both bottoms. The market returned 25% during that period, and it went on to return 44% by the time the economy started rising again.

But looking at data is easy. Having the stomach to remain invested while the economy continues to worsen is a lot harder, but that’s the price investors have had to pay to position themselves for returns like these. Try to keep this in mind if history repeats itself this time around.

The bottom line is that we won’t know for sure if the stock market bottomed until after the recovery is complete. But there has been an opportunity cost of waiting for the economic recovery before investing.