The Dow Jones Industrial Index (“Dow”) is a closely followed index that is often used as a gauge for the U.S. equity market. The index fell over 700 points last Monday for its worst day since October, which compelled the media to print headlines like these: 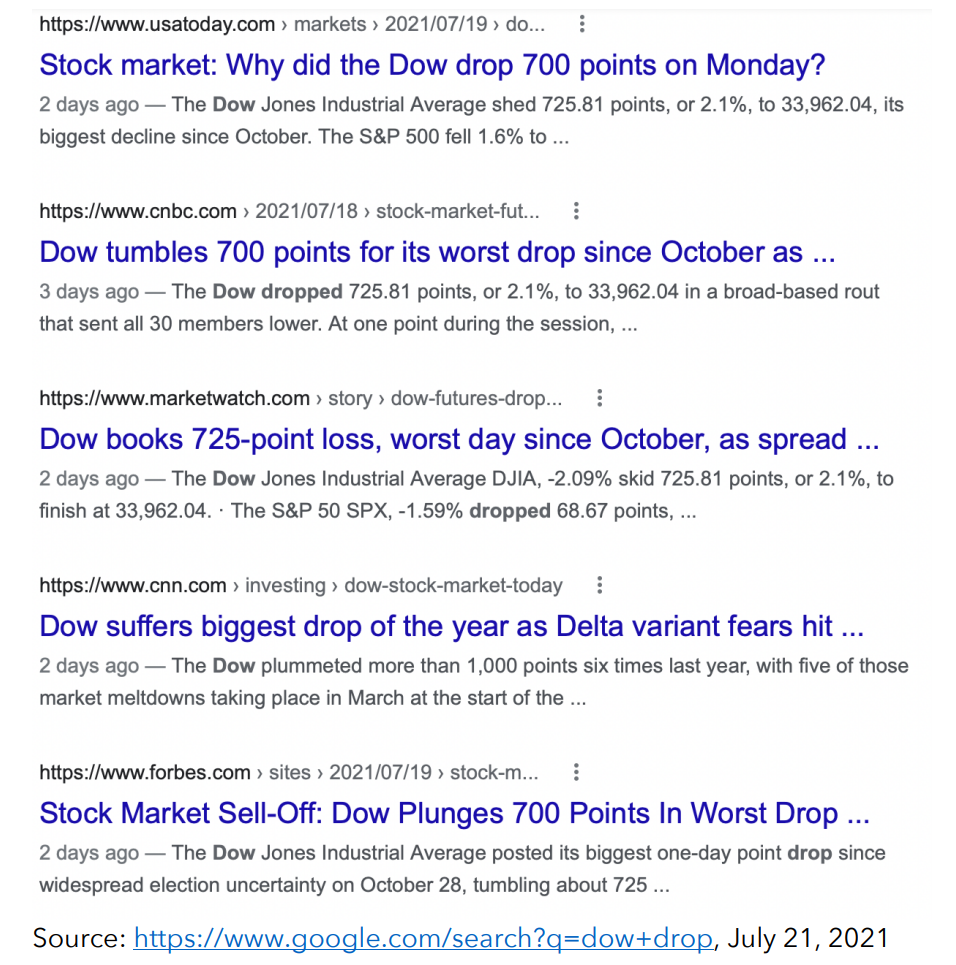 Click on any of these links and they read mostly the same - renewed COVID fears and/or weakening economic data caused the selloff. Most of them even use contrived images of traders on the floor of the New York Stock Exchange holding their heads in despair like this: 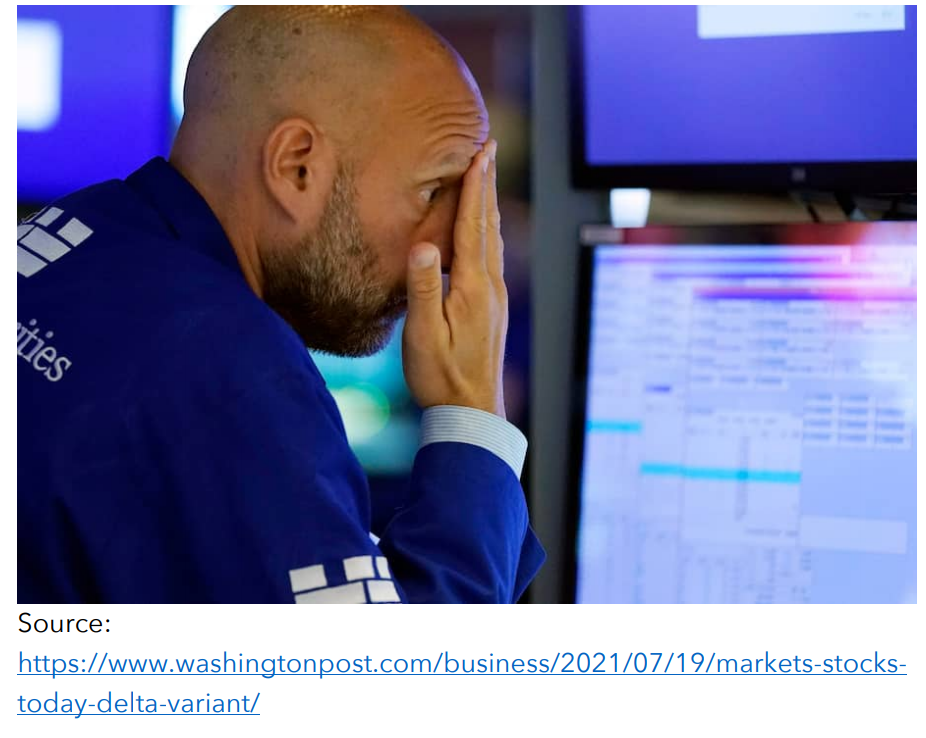 This is an old playbook that the media has used for a long time. Pretty much anytime the stock market gets hit, these silly pictures pop up. Here’s one that came from a nearly identical article back in 2019: 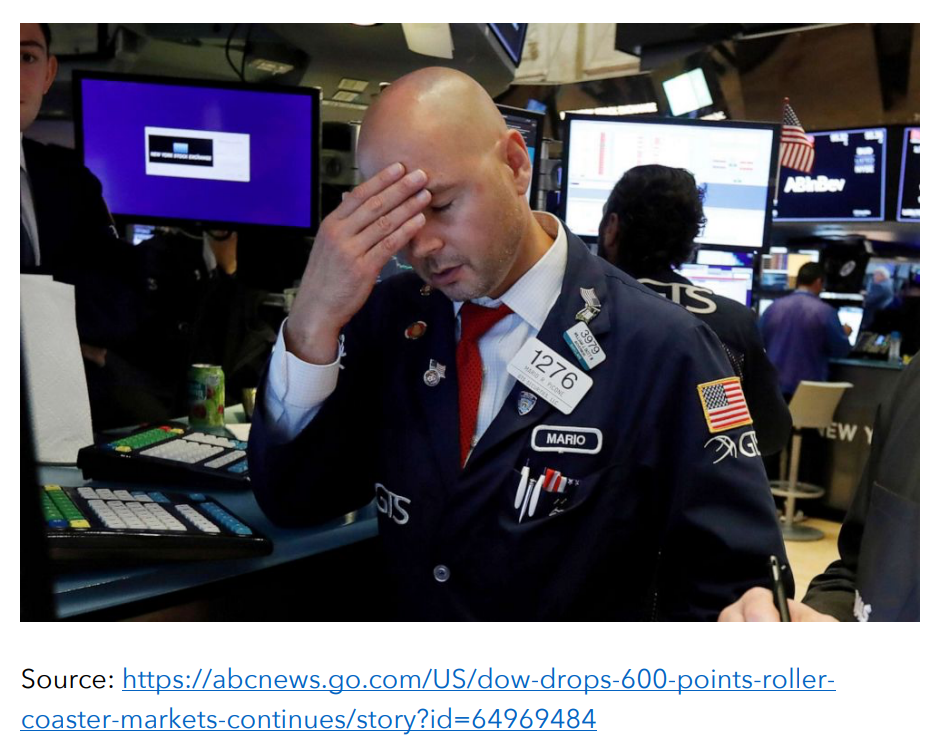 Scare tactics like these are frustrating but also quick to discredit. To start, comparing point declines in an index is meaningless. Percentage movements are all that matter. The Dow closed the prior trading day at 34,687.85, so the 725.81 point drop last Monday equates to a 2.1% decline2. While this loss may sting, it is by no means one of the largest in history.

For example, let’s put this into context by comparing it to the 508-point drop on October 19, 1987. This decline on what will live in infamy as “Black Monday” is smaller on an absolute basis. However, on a percentage basis, the index fell 22% (almost ten times larger).

Furthermore, the Dow is a poor barometer for the broader U.S. stock market for three reasons. First, it only tracks 30 companies. That’s a very small sample size from the thousands of publicly traded stocks.

Second, the Dow is “price-weighted,” which means the stock price determines the weight in the index. The problem with this approach is a stock price tells us nothing about the company or its influence in the global economy. A small company can have a price in the thousands, and an international conglomerate can be priced under $20. That’s why the S&P 500 and other popular indexes are market cap weighted, where the size of the company determines the weight.

Third, since the Dow only holds 30 stocks, it can create large positions in just a few names. Currently, the top five weightings in the Dow account for 31%3 of the index, whereas the top five in the S&P 500 total 22%4. The high concentration in the Dow can make it susceptible to large swings from a single stock.

Perhaps these limitations explain why most money managers prefer to track the S&P 500 and other market cap weighted indexes rather than the Dow. In fact, there is approximately $31.9 billion in Exchange Traded Funds (ETFs) and mutual funds currently tracking the Dow. Compare that to the $1.9 trillion tracking the S&P 500, and it’s pretty clear where the investment community stands on the Dow2.

If the Dow is so widely dismissed by professional investors, then why does the media reference it so often? Furthermore, why would the editors of prominent publications give their staff hall passes on such an egregious use of math to support page one headlines?

One of the most fundamental economic principles is that we are all self-interested. We operate our lives base our decisions on what will best serve us and the people we love. Recognizing this principle is critical to understanding the motivations by not just people but also corporations.

Within this context, the media represents for-profit institutions that are in business to make money. The bulk of their revenues come from advertising, so they are highly incentivized to attract as many eyeballs and website clicks as possible. The Dow is ideally suited to attract attention because the volatility and inability to predict daily moves fuels a constant supply of storylines. As with any great mystery, viewers never know what to expect next.

The Dow also has a higher index level than other equity indices, which brings bigger absolute moves and more exciting headlines. Last Monday, the S&P fell 68.67 points. That’s newsworthy but the Dow falling over 700 points sounds a lot scarier for page one because three-digit declines are ten times the size of two-digit ones.

The bottom line is that stories like these are designed to sell newspapers more than inform investors, so the next time the media embarks on another scare campaign, refer to the cartoon below. 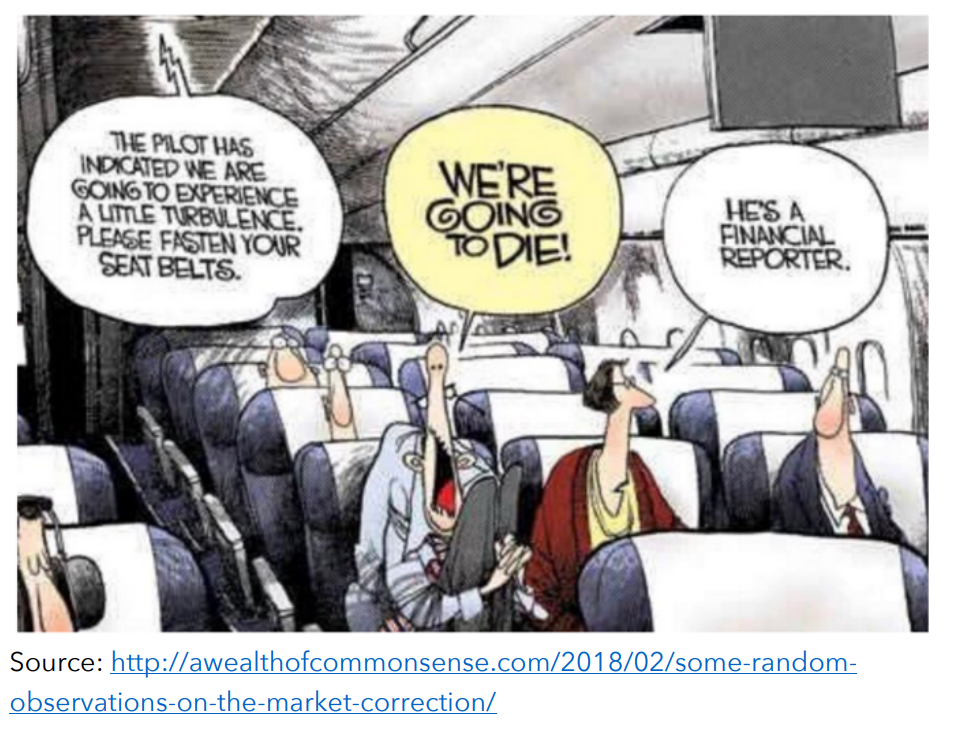