There’s an old saying in the commodities market that the cure for high prices is high prices. Meaning, prices can only rise so high until buyers stop buying and/or producers flood the market with supply to try to capture additional profits. There’s a good chance that both are underway in key parts of the U.S. economy, and if so, these could alleviate some of the pricing pressures through the end of the year.

The first part of the economy is housing. Sales of new and existing homes both fell precipitously in April - extending a trend that began earlier in the year1. Prices aren’t falling per se, but they aren’t rising much either. Combine a wave of supply that’s scheduled to hit the market over the next year with mortgage rates that have effectively doubled, and there’s a good chance that housing inflation moderates over the next year or two.

To be clear, overall demand for housing is still robust, and there’s virtually no sign of a bubble. Even if all this supply gets released into the market, there appears to be plenty of demand to soak it up. But as the growth rates in the chart below come back down to earth, they should temper broader inflation in the economy. 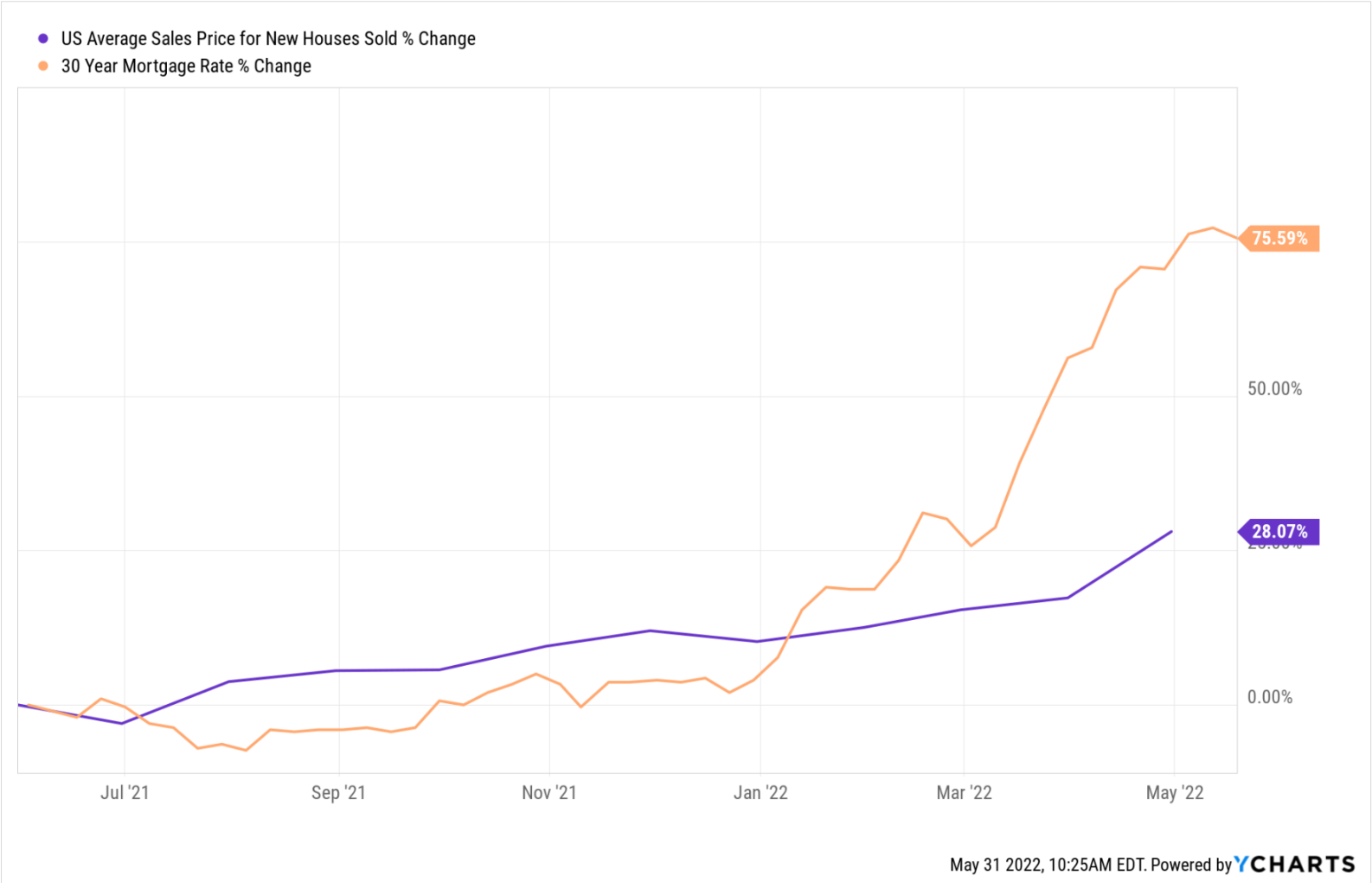 The second part of the economy is durable goods. For well over a year, manufacturers have struggled with transportation bottlenecks, sourcing semiconductors and other integral components, and a myriad of other logistical challenges. Stories of boats bigger than football fields anchored miles off the coast of Los Angeles were rampant in the media – until recently.

The chart below shows that traffic jams into ports have fallen off a cliff. That’s good for the global supply chain, and as China continues to reopen from its most recent lockdown, inflation should continue to moderate in many of the goods that have seen the largest price increases since 2020. 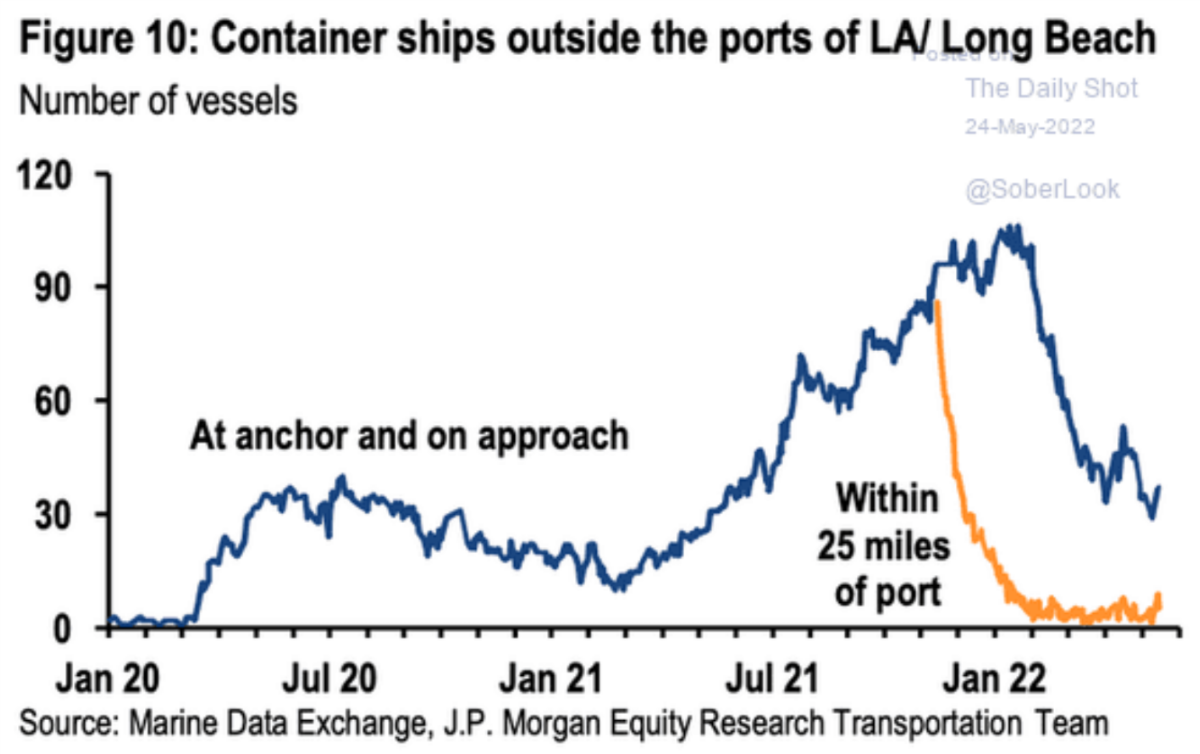 For example, automobiles declined 0.2% in April, which is a stark contrast from the 4.8% rise in March2. This could be a welcome reprieve from car buyers who have balked at the notion of paying more for a used car than a new one. Add in the impact of rising interest rates on car loans and higher prices at the pump, and the days of paying over MSRP could be coming to an end.

The third part of the economy is labor. Wages have risen over the past year faster than any other time in the last four decades3. While this trend is arguably good for employees, it’s less so for employers who need to manage costs.

Don’t misunderstand. Employment trends in the U.S. are some of the strongest in recent history. There are now two job openings for every unemployed person, but stories of signing bonuses and willingness to hire anyone with a heartbeat could be a relic of the past. For example, Walmart and other large employers have recently stated that they are either overstaffed or considering layoffs in some instances4. If so, these trends should temper employment costs relatively soon.

Slowing housing sales, rising interest rates, and hiring freezes fueling layoffs don’t sound encouraging. In fact, they sound a lot like leading indicators of a recession until we consider what’s transpired over the last two years.

It’s been one extreme to the other on virtually every economic data point. We went from the steepest decline in Gross Domestic Product (GDP) in history to the fastest – all within a year. Unemployment shot up to levels unseen since the Great Depression in a matter of weeks, only to now sit close to all-time lows. The list goes on and on.

But here’s the thing. The world doesn’t operate in extremes for all that long. At some point, balance must be restored. For example, retail sales are up almost 29% since February 2020. That’s a staggering move in just 26 months. For scale, retail sales were up less than 7% for the 26 months prior to February 20205. Growth rates quadrupling cannot last in any economy, let alone one the size of the U.S., so it should be no surprise that retail sales must come down at some point.

Now, does this imply a recession? If retail sales fall back in line with its long-term trend of 7%, is that a bad thing? It seemed to be a perfectly fine growth rate before the lockdowns, so how would it risk a recession today? These rhetorical questions are meant to highlight the difference between an economy getting back to “normal” versus falling into a recession. For now, the data indicate that it’s more of the former than the latter.

That being said, we’re not out of the woods with inflation. Not even close. The government increased the money supply by 40% since February 20206, so even if inflation has already peaked and falls from here, it’s inconceivable to think that it will go back to pre-lockdown levels of below 2%. There’s just too much money sloshing around for that to happen unless the government turns on a giant vacuum and removes the excess out of the system.

The bottom line is that inflation very well may have already peaked, and if so, that’s a great next step for the economy to return to normal. But given the dramatic moves over the last two years enacted by Congress and the Federal Reserve, the idea of “normal” has likely changed.