The debt ceiling is back in the news, and the fear campaign will likely amplify over the coming months. Could a U.S. default trigger financial Armageddon, and if so, what are the odds it could happen?

Assuming the Republicans win the House of Representatives, the first test of this divided government may be addressing the debt ceiling. The media has already begun its fear campaign, and we should expect the rhetoric to amplify over the coming months. 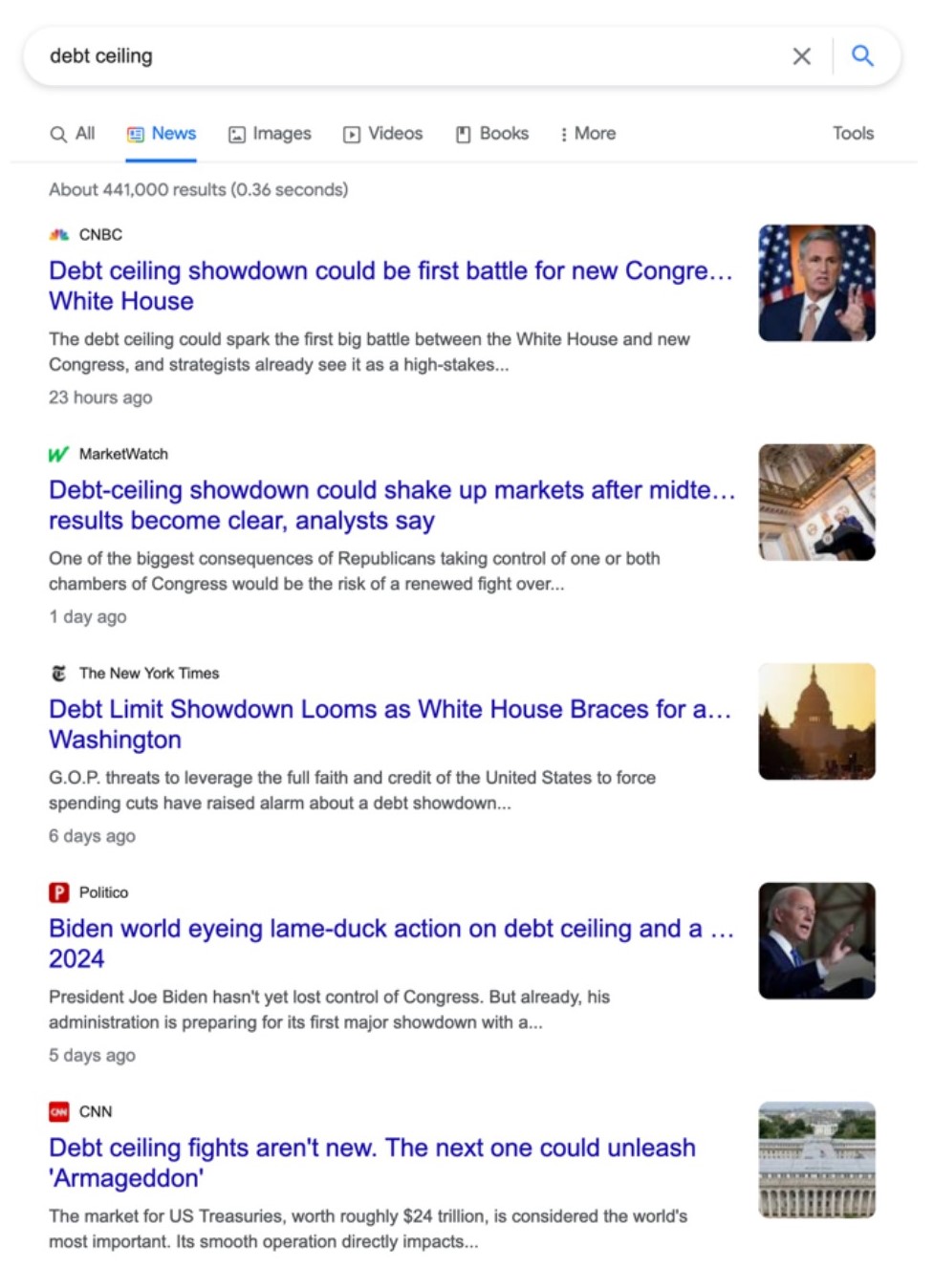 If this feels a bit like déjà vu all over again, you’re not alone. Debt ceiling drama emerges from the depths of political ineptitude with sad regularity, so let’s explain what’s going on and why the financial Armageddon hinted at in the article above probably won’t happen.

It’s never once forced Congress into any realm of financial discipline, nor does it restrict future spending. All it does is restrain the Treasury from paying expenses that have already been incurred. Meaning, the government may not be allowed to borrow more money, but it can continue to increase its future liabilities.

﻿Hence, the debt ceiling is little more than a political tool for Democrats and Republicans to yell at each other until the 11th hour. Then, brinksmanship once again yields a miraculous compromise that enables the government to avert a self-induced “catastrophe.” 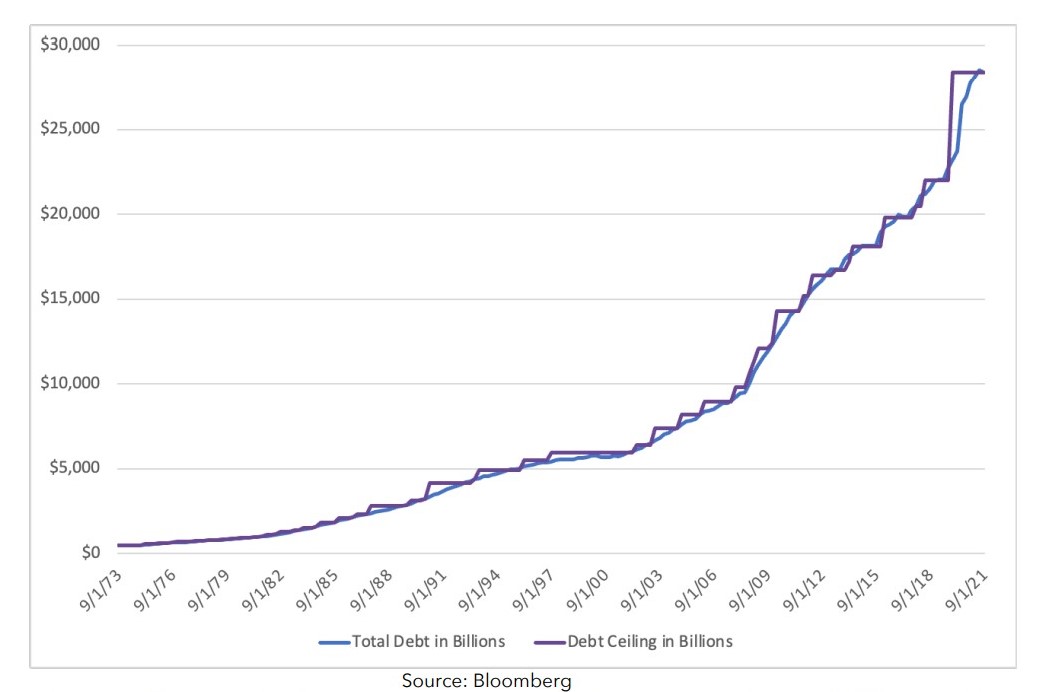 If the Democrats were to retain control of Congress, they could vote to raise the debt ceiling through a budgetary process called “reconciliation.” But if the Republicans split Congress, this option is off the table. The Democrats would need to rally the support of the Republicans to raise it higher, which could happen since it happens all the time.

Second, a more aggressive option is just ignoring the debt ceiling. Those who study constitutional law often point to this clause in the 14th Amendment2:

“The validity of the public debt of the United States, authorized by law, including debts incurred for payment of pensions and bounties for services in suppressing insurrection or rebellion, shall not be questioned.”

Some argue this would authorize or even require Biden to act to avoid a default. For example, he could instruct Treasury Secretary Janet Yellen to ignore the debt ceiling, but this option would probably end up in court.

Third, and this is going to sound like a joke, but the Treasury could issue a platinum coin with a face value of something like $1 or $2 trillion and then deposit it into the Treasury’s account at the Federal Reserve. The law that governs the types of coins the Treasury Department is legally allowed to mint includes this clause3:

"The Secretary may mint and issue platinum bullion coins and proof platinum coins in accordance with such specifications, designs, varieties, quantities, denominations, and inscriptions as the Secretary, in the Secretary's discretion, may prescribe from time to time."

This law appears to give Yellen the power to determine the face value of a platinum coin, mint it, deposit it, and then go back to paying bills. However, using the same law that empowers the Treasury to mint special commemorative and collectors' coins to avoid defaulting on national debt carries a near unquantifiable amount of ridicule.

What if Congress doesn’t act this time and the U.S. defaults? It’s never happened before, and while the future is unclear, three outcomes are likely.

First, the U.S. would no longer be viewed as risk-free. Nearly all of finance and investing is predicated on assessing risk, but risk is relative. The starting point is the “risk-free rate,” which is the interest rate on an investment with no risk. If the U.S. is no longer the de facto option, the world would need another risk-free rate or adopt a new strategy to assess risk.

﻿But I also don’t see this being cataclysmic either. Sure, the U.S. would no longer be risk-free, but it’s not because we couldn’t issue more debt. If we defaulted, it would be because we chose not to pay. It’s like a billionaire failing to pay a credit card bill. Late fees may get charged, but it’s not like the cardholder will go hungry.

Furthermore, foreign debt holders might be upset, but what will they do about it? As of 2019, more than 88% of foreign exchange trading involves the dollar5, and nearly all commodities are priced in dollars. It also dominates as a payment currency for global trade with a 79.5% share of currency usage in value6.

Meaning if a company in Malaysia wants to buy oil from Saudi Arabia, that transaction will be completed using dollars. Rewriting these contracts and redirecting so much international trade would take time and equal trust in a replacement currency.

The USD also represents 59% of all known central bank foreign exchange reserves7. The next closest is the euro at 21%, so there is nowhere near enough euro in circulation, let alone any other currency, to replace the total value of dollars held.

Second, the impact on the economy would likely be low. Almost 70% of U.S. economic activity comes from consumer spending. The economy is growing when we go out to dinner, visit a carwash, or get a haircut. Add in business spending, and these two represent 88% of the $21 trillion economy4.

Therefore, the only conceivable way that a national debt default could trigger Armageddon is if it were to cause consumers and businesses to pull back spending in a big way.

To be clear, there would be an impact. Depending on how the Treasury prioritizes who gets paid first, some people may go without a paycheck or social security for a few days, weeks, etc. Borrowing costs may rise to the point where some consumers balk and postpone purchases. But to use words like “catastrophic” and “Armageddon” is amateurishly reckless (even for a politician).

Third, the world would not end. Rewind the clock two decades ago, and who could have envisioned the outcome of central bankers implementing negative interest rate policies, a global economic shutdown to slow a pandemic, Brexit, negative oil prices, the worst attack on U.S. soil since Pearl Harbor, and a crisis that almost destroyed the global financial system due to an accounting rule?

Each of these events challenged traditional norms of finance and economics, but none caused the world to end. Sure, things changed, and financial physics may not feel the same as before, but we’ve adapted because we had no choice. There’s no apparent reason why this time would be any different.

Lastly, another unthinkable event occurred back on August 5th 2011. This was when yet another debt ceiling battle led to the first-ever downgrade in the U.S. sovereign credit rating. Before then, we had a perfect AAA rating, and the uncertainty around what would happen next was at peak levels.

At first, people were scared. The S&P 500 fell over 17% in days surrounding the downgrade8. But as those who anticipated the worst began to realize that the earth was still circling the sun, the index recovered within 6 months. Since the downgrade, the S&P 500 has quadrupled11.

The bottom line is that neither party wants to be blamed for causing the first default in U.S. history, so this mess will likely be resolved. If not, think about the aftermath of all these other unthinkable events before panicking too much.