The U.S. dollar (USD) plays an integral role in the global economy, so its value relative to other major currencies is watched very closely. Since May, the “greenback” has fallen close to 7%1, and this dramatic move has prompted investors to ask how this could affect their nest eggs.

Making matters worse, anytime the dollar weakens by more than a few percentage points, the fearmongering ramps up fast. Proclamations of an imminent crash of the dollar begin to make their way through the financial media. These tend to be followed by warnings that the dollar is losing its place as the world’s “reserve currency” to China.

The thought of any of these coming to fruition borders on science fiction. But this is also one of the strangest years in modern history, so it’s worth discussing why the dollar has weakened so much and addressing some of these fears. But before we do that, let’s spend some time on the mechanics of currencies and why a weak currency isn’t always a bad outcome. 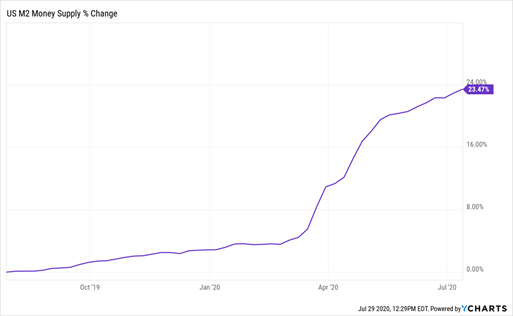 Currencies are no different than any other freely traded asset in that its price is based on the supply available and the demand to own them. Therefore, to better understand why the dollar has weakened, we must analyze both.

Supply is easier so let’s begin here. The chart below shows that the money supply took off in March and is almost 25% higher since this time last year. This is a massive increase and has stoked fears of runaway inflation (aka “hyperinflation”).

It’s happened before. Zimbabwe printed so much that the value of their currency fell to the point where they issued 100 trillion-dollar bank notes in 2008 (now available as souvenirs on eBay2). Venezuela printed so much that food trucks were using its currency to wrap empanadas back in 2015 because the paper currency was cheaper to use than napkins3.

It’s also important to consider why so many dollars have been printed this year. It wasn’t to flood the market or to create money for Congress to pay bills it otherwise could not afford. It was done to meet the surge in demand for dollars during the panic back in March (more on this below) and provide a safety net until our economy recovers.

Simply put, there is no question this increase in the money supply could ignite inflation down the road. But there’s a big difference between rising prices and hyperinflation, so it’s unlikely that we will be wrapping tacos in $1 bills anytime soon.

Demand is trickier to analyze, so let’s break it into two chunks by delineating short-term from long-term demand. Short-term demand is fickle because it’s mostly fueled by fear, greed, and other emotions.

That’s why the demand for dollars exploded back in March. The panic that crippled global financial markets pushed investors from all over the world into one of the safest assets in the world – the U.S. dollar. When markets began to calm, investors started selling the dollars they had bought for safety just weeks prior.

Meaning, the recent weakness in the dollar appears to be largely attributed to investors exiting the greenback because they don’t need the safety of it anymore. That does not sound like the precursor to an imminent crash of the dollar. If anything, the fact that so many flocked to the dollar during a time of extreme panic suggests the opposite – that its use as a safe haven remains intact.

That being said, let’s move to long-term demand where fundamentals and incumbency matter most. Here, two uses of the dollar practically ensure it isn’t going anywhere. The first is its standing as the world’s reserve currency, and the second is its role in global trade.

A reserve currency is one that is held by governments and institutions in very large quantities to facilitate global transactions. Since the 1940s, the most widely accepted reserve currency has been the U.S. dollar.

A reserve currency must be both desirable and available. As of 2019, more than 88% of foreign exchange trading involves the dollar4, and nearly all commodities are priced in dollars. It also dominates as a payment currency for global trade with a 79.5% share of currency usage in value5.

Regarding availability, the USD currently represents 61% of all known central bank foreign exchange reserves6. The next closest is the euro at 21%, so there is nowhere near enough euro in circulation, let alone any other currency, to replace the total value of dollars held.

For those who fear China’s currency will replace the dollar as the world’s reserve currency, the renminbi accounts for around 5% of international trade4 and 2.1% of central bank reserves7. Given China’s blatant manipulation and strict currency controls, it’s hard to envision how they could unseat dollar.

Simply put, it took the U.S. several decades to create the level of trust and availability needed to become the world’s reserve currency, and there is little chance this will change anytime soon.

However, currencies are very complex instruments that often test the limits of intuition. There are times when a weaker currency can help an economy, and governments often intentionally drive the value of their currency lower.

To see why, let’s pretend there is no pandemic at the moment and plan a trip to Paris. Hotels are generally expensive in the City of Lights, so assume that the best rate we can find for a room is €200/night (200 euro/night).

Despite the room rate remaining the same, the trip is cheaper because one U.S. dollar can now buy more euro (the USD has strengthened versus the EUR).

Given the nature of the global economy, companies face nearly identical purchasing decisions every day. If exchange rates make the exact same goods cheaper in Vietnam than Brazil for a buyer, Vietnam should win the business. Over time, if Brazil becomes cheaper, purchasing should shift to Brazil.

As a result, countries are often incentivized to keep their currency weak versus its competitors for two reasons:

Furthermore, what impacts the economy also tends to move stocks, and a weaker dollar has typically been positive for earnings of U.S. based multinational corporations. According to Goldman Sachs, a 10% decline in the trade-weighted dollar increases S&P 500 earnings by about 3%1.

A cheaper dollar also tends to bolster foreign demand for U.S. stocks. Similar to the hotel example above, if euros can buy more dollars, then stocks here look more attractive to European investors. These tailwinds are often enough to dampen the effects of any headwinds associated with a weakening dollar such as economic uncertainty or unpopular fiscal policy.

Currencies are affected by several factors such as interest rates, inflation expectations, government spending, etc. To learn how these impact price, textbooks teach to change one factor while holding the others fixed and observe the outcome.

For example, if we wanted to learn how the money supply impacts the dollar, we would make no changes to the assumptions of all other variables and run it through a model. But in the real world, factors are far too interconnected. Nothing occurs in isolation.

Herein lies the danger of taking headlines that discuss the dollar at face value. Sometimes a weakening dollar is bad, but other times it’s just what our country needs. It just depends on all factors combined together. For now, there is no indication whatsoever that the U.S. dollar is headed down the road to perdition.

Lastly, those who preach of the demise of the dollar have three huge hurdles to overcome before they can take a victory lap. First, they have to figure out how another currency could replace the dollar. Second, how this happens within an investible time horizon. Third, figure out a way to profit from such a move. The odds of all that happening are likely right up there with an asteroid taking out the moon.

The bottom line is that the U.S. dollar is the most widely accepted, trusted, and stable currency in the world. These traits take decades to build (and reverse), so ignore the ups and downs over the span of a few months because any impact to a portfolio will likely be minimal over the long run.