Recently, the “greenback” has surged higher relative to other major currencies and caught the attention of the media and investors globally. Given the dollar’s role in the global economy, what are the implications for U.S. based investors?

Rampant inflation has pushed prices at gas pumps and grocery store aisles to record highs. The Federal Reserve is currently raising interest rates faster than any time in four decades. Consumer confidence is also the lowest it’s been in 70 years, and the 30-year mortgage rate has almost doubled since January1.

Additionally, numerous polls and surveys indicate that a lot of investors believe the U.S. economy is already in a recession. Yet despite all the negativity, the chart below shows that the U.S. dollar has surged higher relative to other major currencies. 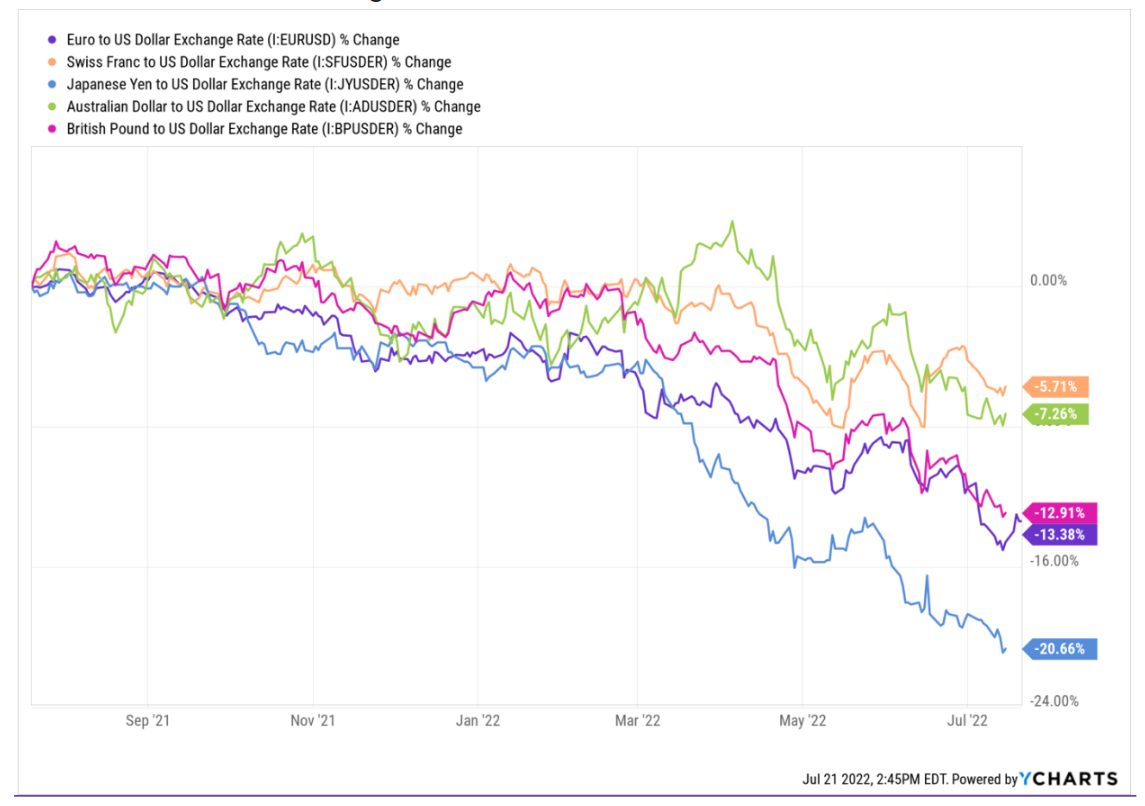 Furthermore, this strength has led to chatter about an impending “doom loop.” This happens when a rising dollar causes economic weakness in foreign countries. For example, the euro is down 13% relative to the dollar. Meaning, Europeans are paying 13% more money today to buy our exports than a year ago. This added cost may slow down the European economy, which could in turn further weaken the euro and strengthen the dollar. Repeat this cycle a few times and a full-blown crisis could emerge (in theory).

Before we discuss the merits of a doom loop or any other potential impact on the global economy, let’s first explain why the dollar’s popularity has surged lately.

Three events can explain most of the recent demand for dollars. First, there’s no question the U.S. has its share of issues right now, but in the world of currencies, everything is relative. Our economy recovered faster from the lockdowns and remains far more productive than our competition. We are also printing a lot less new money this year than Europe and Japan, so our supply is growing slower.

Second, the war in Ukraine and a budding crisis in Europe is fueling a flight to safety. During economic downturns, the dollar strengthens because of our self-sufficient economy (we are energy and food independent, leaving us less exposed to downturns in international trade).

Third, the Federal Reserve is raising interest rates and subsequently making our debt more attractive to foreign owners. For example, the European Central Bank (ECB) raised their key interest rate this week to zero percent. It had been negative for the last 8 years, and this was their first rate hike since 20112.

Japan is even further behind. Buy a 1-year Japanese government bond today, and you’ll lock in a loss of -0.14%. Compare that to the +3.15% paid here in the U.S. for the same duration, and it’s no wonder why demand for dollars has spiked3.

Regarding longer-term demand, two uses of the dollar practically ensure it isn’t going anywhere anytime soon. The first is its standing as the world’s reserve currency, and the second is its role in global trade.

A reserve currency is one that is held by governments and institutions in very large quantities to facilitate global transactions. Since the 1940s, the most widely accepted reserve currency has been the U.S. dollar.

A reserve currency must be both desirable and available. As of 2019, more than 88% of foreign exchange trading involved the dollar4, and nearly all commodities are priced in dollars. It also dominates as a payment currency for global trade with a 79.5% share of currency usage in value5.

Regarding availability, the USD currently represents 59% of all known central bank foreign exchange reserves6. The euro is in second place at 21%, so there is nowhere near enough euro in circulation, let alone any other currency, to replace the total value of dollars held.

For those who fear China’s currency will replace the dollar as the world’s reserve currency, the renminbi accounts for around 5% of international trade4 and 2.8% of central bank reserves6. Given China’s blatant manipulation and strict currency controls, it’s hard to envision how they could unseat dollar.

Simply put, it took the U.S. several decades to create the level of trust and availability needed to become the world’s reserve currency, and there is little chance this will change anytime soon.

Currencies are complex instruments that often test the limits of intuition. They are also affected by several factors such as interest rates, inflation expectations, government spending, etc. To learn how each impacts price, textbooks teach to change one factor while holding the others fixed and observe the outcome.

For example, if we wanted to learn how the money supply impacts the dollar, we would make no changes to the assumptions of all other variables and run it through a model. But in the real world, factors are far too interconnected. Nothing occurs in isolation.

Herein lies the danger of taking headlines that discuss the dollar at face value. Sometimes a strengthening dollar is bad, but other times it’s just what our country needs. In fact, the only consistency I’ve found in currencies is the certainty that the media will find some way to portray each move negatively.

To be clear, dollar movements are critically important to foreigners. Sri Lanka’s recent financial collapse had a lot to do with not being able to get their hands on enough dollars to pay their debts. But exchange rates are far less of an issue for Americans since our paychecks and expenses are mostly denominated in the same currency that drives nearly all global commerce.

The bottom line is that the U.S. dollar is the most widely accepted, trusted, and stable currency in the world. These traits take decades to build (and reverse), so ignore the ups and downs over the span of a few months because the impact will likely be minimal over the long run.