The National Bureau of Economic Research (NBER) officially announced this week that the U.S. economy entered a recession back in February. This marked the end of the 128-month expansion that was the longest in records reaching back to 18541.

This announcement was mostly expected, but what may come as a surprise is that there is ample evidence to suggest that the recession ended back in mid-May. Meaning, roughly one month prior to the NBER making the recession official, it may have already been over. If so, this would not only be the sharpest downturn since the Great Depression but also the shortest.

Let’s examine recent employment data to see why this may be the case. Initial Claims for Unemployment Insurance measures the demand for help from people who have recently lost their jobs. Continuing Claims represents those who have been receiving ongoing assistance. Think of this like a club, where initial claims are the new members and continuing claims are all the members.

Two things typically need to happen for a recession to end. First, there needs to be a peak in initial claims. The chart below indicates this likely happened somewhere in late April (purple line). It’s important to note that a peak does not indicate everything is back to normal, but rather, that it’s just getting less bad. 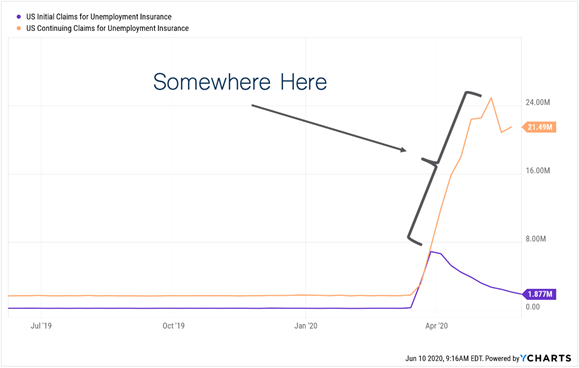 Second, there needs to be a peak in continuing claims. When this number begins to fall, it indicates that the number of people finding new jobs (losing unemployment benefits) is exceeding those who are filing for initial claims.

Said another way, when both peak, it suggests that more people are getting hired than being fired. It also signals the end of a recession (as long as the trend sticks) because it lowers the unemployment rate.

The employment report from last Friday (June 5th) may support this trend. Rather than further deterioration of the job market being reported, payrolls rose and the unemployment rate fell. It was so much of a surprise that some of the more vocal pundits claimed that the Bureau of Labor Statistics (BLS) was influenced by President Trump’s administration2 to report positive numbers (a statement that was retracted).

Admittedly, there are a lot of variables that need to be examined to determine the state of the economy. But employment is arguably the most important, and right now it’s telling investors that the economy is expanding.

If the recession is over, then we are in a new bull market. There are five interesting trends that have developed since April that support this theory.

First, the chart on the next page shows that cyclical stocks have outperformed the broader market. Cyclical industries are those that are highly levered to economic growth. Financial services, energy, materials, and industrials tend to make a lot of money in the early innings of an economic recovery, and these stocks have ripped since April in anticipation of this.

Second, small cap stocks are outperforming large cap stocks. During an economic downturn, fears that smaller companies will not survive crush their stock prices. Seeing this trend reverse indicates that investors may feel that the worst is behind them.

Third, the stocks that got hammered the hardest have surged back. This “junk rally” is common in the infancy of a bull market, and it’s important to see because it is an indicator for investors’ risk tolerance.

Fifth, there seems to be a healthy amount of disbelief out there. While impossible to truly measure, the early stages of an economic recovery tend to be dismissed by most investors who rely on backward looking data (like gross domestic product) to support their bearish stance. The higher the refusal to accept the economy has bottomed, the earlier we are in the new bull market (and the better the opportunity for long-term gains).

None of these trends are strong enough to stand on their own, but when combined, they suggest a broader one – that the stock market has positioned itself for the early innings of a new bull market. 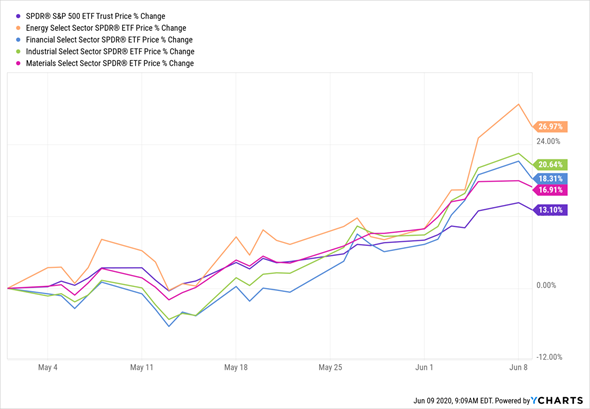 The end of the recession does not mean the economy has recovered (not even close). It will likely take at least 18 months to see economic activity return to where it was back in January. Getting employment back will probably take even longer.

Nor does this mean that volatility is in the rearview mirror (Thursday taught us that). Economic recoveries are anticipated by the stock market, but that doesn’t mean it gets it right every step of the way. Often times, the market can get ahead of itself and bake in overly optimistic expectations. There will probably be more bumps along the way because that’s how it works. There were bumps after the dot-com bubble burst and even some craters after the financial crisis.

In an ideal world, investors could just wait until things “calmed down.” Let the economy fully recover, get over the bumps that are invariably lurking, and give companies time to improve profitability. The problem is that by then, so much of the potential for long-term gains will already be in the books.

Furthermore, waiting until the economy fully recovers only swaps one risk for another. As the economy moves from recovery to expansion, valuations also tend to rise. This can lead to lower expected returns and violent corrections. Meaning, those who wait until the perceived risk of owning stocks goes away often end up buying at or near the top of a market cycle.

The bottom line is that if there is no risk, there is no reward. While the recession appears to be over, that doesn’t mean it’s going to be smooth sailing from here. Economic recoveries are uncomfortable, controversial, and incredibly frustrating, but that’s the price one must pay to position themselves for equity-like returns over time.