Gold broke through $1,800 per ounce earlier this month, crossing a milestone not reached since 2011. In fact, gold is up about 19% as of July 20th. But that’s nothing compared to silver. Since March, it has risen a staggering 85%2.

Gold and, to a lesser extent, silver tend to do well when interest rates dip, the U.S. dollar weakens, and/or the risk of inflation rises. Right now, we are seeing all three due to the aggressive monetary and fiscal policies enacted since the beginning of the COVID crisis. This has unsurprisingly caught the attention of the media and investors.

The decision to own precious metals in a portfolio could be one of the longest and most debated topics in financial history. Take gold as an example. There are the “gold bugs” that own and practically worship it, and there are those who view it as a shiny pet rock and refuse to own it.

Gold bugs argue that when things get really, really bad in an economy, gold has been a reliable “store of value” and a form of universal currency across the world for millennia. They view its performance this year as just another example of why investors should own it.

But there are several notable investors that disagree. Take Warren Buffett’s famous vilification of gold during a speech he gave at Harvard University back in 19883:

“It gets dug out of the ground in Africa, or some place. Then we melt it down, dig another hole, bury it again and pay people to stand around guarding it. It has no utility. Anyone watching from Mars would be scratching their head.”

Rather than attempt to take a side in this holy war, let’s instead discuss the merits of using gold and silver as diversification tools. This will force us to view them through agnostic eyes and assess any direct or ancillary benefit to owning them.

Within this context, precious metals have exhibited almost no long-term directional relationship to stocks and just a little to bonds1. This lack of “correlation” could potentially reduce volatility in an investor’s asset allocation and provide strength to a portfolio during times of financial stress. Therefore, let’s first discuss the different ways to own precious metals.

There are three ways to invest in precious metals. The first is direct ownership such as owning coins and/or jewelry. This is relatively easy for most precious metals, but there could be storage costs to consider. It’s often too risky to dig a hole in your backyard, and space in a vault isn’t free. Insurance is also an option, but these premiums eat into returns over time.

The second way is to invest in companies that produce or transact in precious metals. There is no direct storage cost to own stock, nor is insurance necessary. However, stock ownership exposes an investor to “company risk.”

For example, if a gold miner incurred debt to expand operations but could no longer support the interest payments, an investor could lose big if the company files for bankruptcy (even if gold prices were rising). Hedges are supposed to reduce risk in a portfolio, not swap one risk for a potentially larger one.

The third way is using Exchange Traded Funds (ETF). This is a marketable security that tracks an index or a basket of stocks, bonds, and/or commodities. For example, a silver ETF owns bars of silver and then issues shares that represent a percentage ownership of the silver being stored in the vault. These shares are then bought and sold in the same manner as equities on major stocks exchanges.

The benefits to ETFs that hold precious metals are ease of ownership, ability to buy/sell quickly, and no risk of default and/or bankruptcy. Meaning, an ETF share represents a claim to a portion of the metal sitting in a vault. Even if the company managing the ETF were to fail, the value of the metal would be divided up and returned to shareholders.

The downside is that ETFs charge a fee called an “expense ratio” to facilitate this ease of ownership. They also qualify as commodity pools to the Internal Revenue Service (IRS), so investors will receive the dreaded K-1 during tax season.

Several precious metal ETFs are available to investors, and the funds that own the actual metal and not some derivative of it are all pretty much the same. Some may store their assets in one vault, while others spread around various locations to diversify the risk, but there’s not much else they can do to differentiate themselves.

Despite the similarities, expense ratios can vary greatly. For example, the largest gold ETF is the SPDR Gold Shares ETF (ticker: GLD)4. This ETF holds gold bars in a vault in London and charges 0.40% ($40 annually for every $10,000 invested)4. The iShares Gold Trust (ticker: IAU) has a smaller expense ratio at 0.25% (37% cheaper than GLD) and spreads out its gold across London, New York, and Toronto4. The Aberdeen Standard Gold ETF (ticker: SGOL) is even cheaper at 0.17%, which is less than half the cost of GLD for the exact same product4.

The reason why GLD is able to charge so much more is due to its “liquidity,” or the ease at which an investor can buy and sell. The more liquid an investment, the cheaper the transaction costs.

As of July 23rd 2020, the average volume of shares traded over the last 30 days for GLD was 10.2 million per day. For SGOL, it was a fraction of this at 1.3 million shares per day. The eight-fold increase in volume makes it a lot easier for big traders to jump in and out of positions quickly. Because of this size advantage, GLD is able to charge a premium for their product.

Therefore, short-term traders should focus more on transaction costs over expense ratios because they tend to hold positions for smaller time periods. Their total cost is lowest where liquidity is highest (holding all other variables equal).

On the flip side, long-term holders should seek the lowest expense ratio. The higher transaction costs will end up being a tiny fraction of what is saved over the long run via the lower expense ratio.

How Much To Buy

Generally speaking, an allocation to precious metals should be relatively small – perhaps less than 10% of total investible assets (excluding a primary residence).

There are three reasons for such a nominal amount. First, despite the potential for diversification, precious metals tend to be quite volatile. In fact, the average 30-day volatility for gold over the last decade was slightly higher than the S&P 5004. Silver was 77% higher4. That’s not a ride that most investors want to take.

Second, the chart below shows that both metals have massively underperformed the S&P 500 over the last 30 years. A key tenet of investing is that an investor who accepts more risk (volatility) should expect better returns over time. Both silver and gold have failed here repeatedly.

Third, not all assets are investments. Stocks, bonds, and real estate are investments because they generate value (profits, rent checks, etc.) over time. This causes the price to rise and returns to compound.

Gold and silver do not have any revenue, cash flow, or earnings. They don’t pay dividends or reinvest back into themselves. They are assets. Their prices are as arbitrary as art, bitcoin, Faberge eggs, or Pokémon cards. In that, their price is purely based on the demand to own them and the supply available rather than the value they create.

Simply put, it’s ok to own precious metals as long as your financial future is not overly dependent upon the price of them rising over time.

Arguably, the most important question to ask is why an investor wants to own precious metals. If it is to try to add some diversification, then so be it. Buy a low-cost ETF and call it a day. If it’s a hobby, then there’s likely no harm in collecting them.

But if the intent is to day trade or make any attempt at all to bet where the price is going over the next day, week, month, or even year, walk away. I’ve lost count of the number of fancy hedge funds in New York City that were on the wrong side of gold and are no longer in business. If they can’t get it right consistently, nobody can.

If it is out of fear over a return to the inflation of the late 1970s, a collapse of the U.S. dollar, or any other “end of the world” scenario, then take a step back and assess the odds of these events actually occurring. 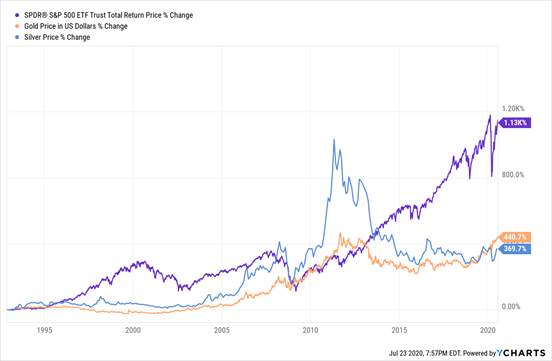 The world does not end all that often, and even if it does, what problem will precious metals solve? Gold has almost no commercial use outside jewelry, it is hard to transport due to its weight, and cannot be divided up easily to pay for goods without proper tools. Silver and diamonds (not a metal but same idea) do have commercial use, but if the world ends then all industrial production would end anyway.

Furthermore, imagine if the demand equation were to change. Over 90% of demand for gold comes from India and China5. This could be an indication that gold may not carry the same weight to the Americans and Europeans who survive the apocalypse. Diamonds have value not because they are scarce but because the supply is controlled by a few corporations and countries. What happens if the zombies crack into the vaults in Russia and inadvertently flood the market with supply?

The bottom line is that precious metals are assets, not investments. They can provide diversification when used in moderation, but I’ve found them to be far more useful as a tool to surprise a loved one with an unexpected gift than a way to secure my financial future.