Google provides a service called Trends, which graphically displays the popularity of a search phrase over time. The chart below is a trend report on “tech bubble,” and it’s pretty clear that this concern has been on the minds of investors lately. 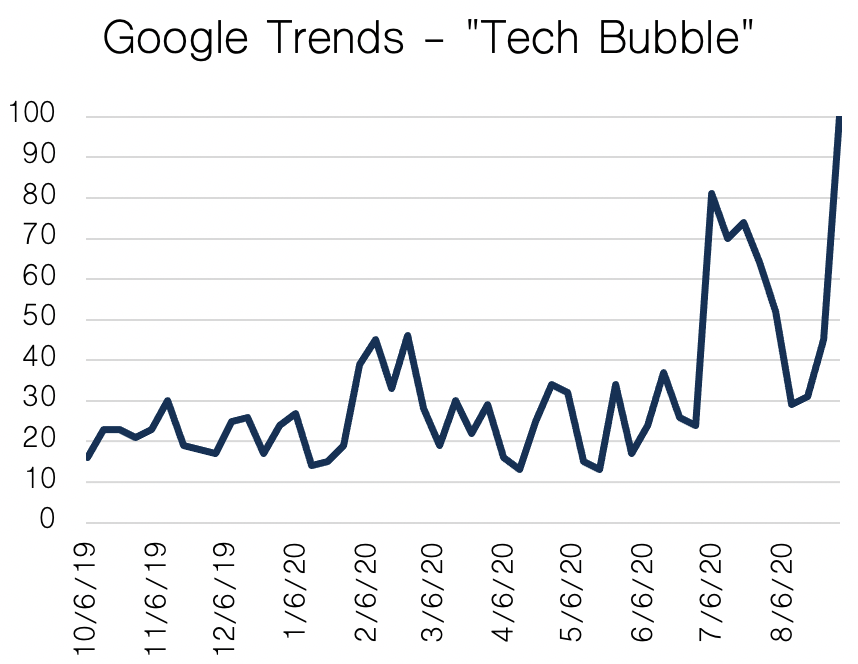 It’s not surprising. The last time tech crashed was back in 2000, after internet companies sprouted up like weeds and fueled one of the largest bubbles in the history of financial markets. The scars from this traumatic event never healed for some, so it makes sense to see the internet inundated with articles like these: 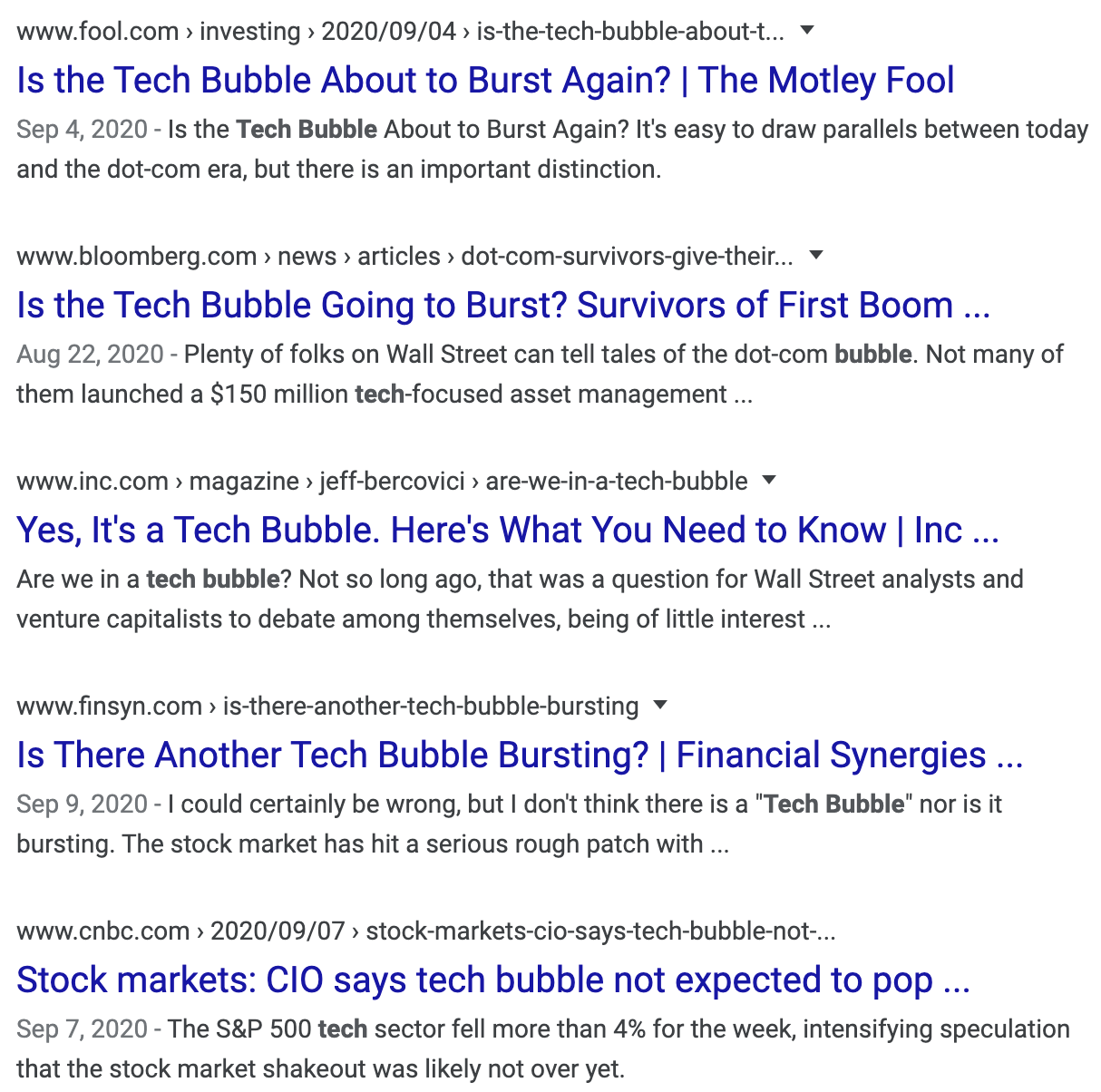 Could it be happening again? The Technology Select Sector ETF (ticker: XLK) is up over 28% this year, and a staggering 198% over the last five years1. That’s quite a run, but it takes more than rising prices to fuel a bubble. Therefore, let’s compare today to the months leading into the dot-com crash to see if investors should heed these warnings.

William Bernstein’s seminal masterpiece, The Four Pillars of Investing, highlights four necessary conditions that must exist for a bubble to develop.

The first is either a major technological revolution or a shift in financial practice. Think about the impact of the light bulb, automobile, steam engine, etc. These products changed the world and fostered excitement that could not be contained.

The second condition is easy access to credit. If money is cheap and accessible, then fewer barriers exist for people to put not just their money behind an idea, but far worse, someone else’s in the form of margin debt (borrowing money to invest).

The third condition is that people must have already forgotten about the last bubble. Since the bursting of a bubble tends to leave permanent emotional scars, a new crop of investors must emerge that were not around the last time things got really bad.

The fourth is, as Bernstein puts it, “a complete abandonment from time-honored methods of security valuation”2. As bubbles grow, investors lose the ability to value assets on traditional metrics, so they look to new and untested ones to justify the mania.

These four create an environment where speculators buy simply because the price keeps rising. Like a snowball rolling down a hill, the bubble feeds on itself until it loses control and ultimately crashes.

Let’s apply this test to the dot-com craze to see if it would have detected the bubble before it burst:

Condition 1: There is no question that the internet was a major technological revolution. Visionaries saw a new world, but few knew how to translate these prophecies into profitable ideas.

Condition 2: Access to capital was frictionless. Companies run by freshly-minted MBAs with no earnings, cash flow, or even sales were raising billions with ease by selling their worthless shares in initial public offerings (IPOs).

Condition 3: A generation had certainly passed. Most investors were too young to experience the pain and misery of the 1973/74 bear market, which was one of the worst in U.S. history.

Condition 4: In April 2000, right around the time the dot-com bubble burst, here are just a few of the companies that were trading at valuations that look like typos2:

For scale, even the most egregious growth stock in today’s market probably sells below 100x sales. Some would argue that a more realistic valuation for a growth company is closer to 3x-5x sales.

Add it all up, and each of the four conditions were present leading into the dot-com bubble burst. Now let’s apply the same test against the technology sector today to see if it’s déjà vu all over again.

Condition 1: The Internet of Things (IoT), quantum computing, artificial intelligence, and other subsegments of tech are just a few of the trends that will change the world more than once over the next decade.

But this revolution has been developing for years on an already strong foundation, and those leading the charge aren’t running around with their heads cut off while the general public is fueling unmanageable hype. Today’s tech market is far more civilized and structured.

Condition 2: In many ways, access to capital has never been better. Interest rates are at historic lows, and banks have plenty of capital to lend. Furthermore, recent tech IPO successes are fueling one of the strongest capital raising markets since 19993.

But fewer dumb ideas are getting funded. Back in 2000, a management team with zero tech experience could raise millions by simply adding “.com” to their company name. Today, there may be more money out there, but the stewards of capital are far more careful about how it gets deployed.

Condition 3: Many investors today were in grade school when the dot-com bubble burst. Much of what has been discussed here would read as a history lesson rather than a reminder to what it feels like to own stock in Pets.com - that dot-com darling that liquidated just 268 days after its IPO back in 20004.

Condition 4: While the first three conditions are admittedly subjective and open for debate, the fourth is objective and ends any resemblance. The Nasdaq Composite Index is up over 137% since 2015. From 1995 to the peak in March 2000, this tech-heavy index was up over 571%. That’s over four times the growth rate versus today.

Furthermore, investors were valuing tech stocks in 2000 on useless metrics like the number of daily visits to a corporate website because so many of those companies had nothing else to value. They literally had no assets. The tech sector today produces massive amounts of cash flow, revenue, and earnings. In fact, the chart below shows that some companies are so big that they resemble large countries. 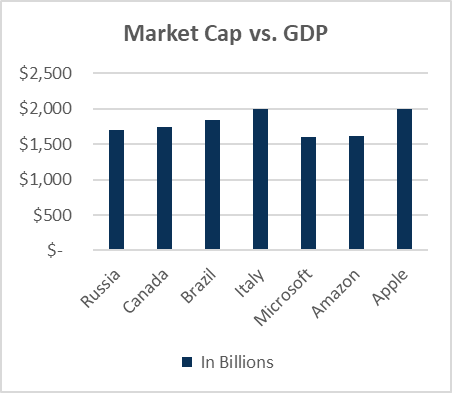 Lastly, once investors realized that they had invested in pipe dreams back in 2000, they could sell and earn 6% or more in cash and government bonds. They had other options that beat inflation, and this most certainly intensified the bubble burst.

Today, as the saying goes, There Is No Alternative (TINA) to stocks. Expected returns in cash and bonds look abysmal when compared to the earnings yield from big tech. This makes it a lot easier to justify historically high valuations when there are few places to go that can exceed inflation.

Charles Mackay wrote Extraordinary Popular Delusions and the Madness of Crowds in the 19th century, which chronicled famous bubbles over time. It’s a fascinating read because of the underlying consistencies throughout each bubble.

The most entertaining of them all was the “tulip mania” that almost destroyed the Dutch economy in the 17th century. Back then, tulips arrived in the Netherlands, and long story short, one species became so popular that it sold for more than ten times the annual income of a skilled craftsman. Yes, tulips. Those flowers that last about a week in a vase.

This bubble eventually burst and destroyed the lives of those who traded their land, life savings, and anything else they could liquidate to get more tulip bulbs. Ultimately, the panic forced the government to step in and support the market, which only made matters worse. The whole story sounds crazy, but swap tulip bulbs for dot-coms in the late 1990s, and it reads nearly identical.

But this is not 2000. It’s not even close. Today, big tech represents a group of gigantic cash machines that enjoy monopoly profits and have fortress balance sheets capable of withstanding way more than a pandemic. They are also globally diversified, attract the best talent, and are driving much of the innovation that’s shaping the world.

However, this backdrop doesn’t imply that the tech sector is a slam dunk (the last few weeks have taught us that). No matter how good or bad a sector screens, there are always overvalued stocks and stretched themes that pose risk. The economy is also still in the early innings of a recovery, there’s no vaccine yet, and a contentious presidential election is a month away. Any or all of these could cause discomfort over the coming months.

The bottom line is there does not appear to be a bubble forming in the technology sector. If anything, today looks more like the antithesis of the dot-com craze than a repeat. The fundamentals are stronger, and valuations are collectively a fraction of where they were leading into the crash.