The very first bitcoin Exchange Traded Fund (ETF) began trading last Tuesday. The ProShares Bitcoin Strategy ETF (ticker: BITO) saw more than 24 million shares trade hands on its first day of trading – making it the second-most-traded fund launch of all time1. This historic event (in the eyes of some) presumably fueled bitcoin to a new all-time high the very next day2.

All this excitement compelled me to look under the hood of BITO, and after doing so, I’m getting the sense that a lot of buyers have no idea what they own. But before I explain why, let’s first run through some common ways to gain exposure to bitcoin to better understand why BITO even exists.

The first way to own bitcoin is direct ownership in a “digital wallet.” Years ago, this required niche technical expertise, but today it’s as easy as opening an account at Coinbase, Robinhood, or any of the other popular trading platforms. There are even options for those who want to own crypto inside IRAs and other retirement accounts4.

The risks with direct ownership are theft by hackers and losing the password to a digital wallet (yes this actually happens5). Buying and selling bitcoin can also be expensive, and there aren’t many accessible ways to insure bitcoin like gold or other valuables.

The second option is via futures contracts. Here, bitcoin is transacted through agreements between buyers and sellers that stipulate the price paid and the time of delivery. The futures market offers consistency (contracts look the same) and liquidity (ease of buying and selling).

Futures also allow speculators to bet on bitcoin without having to own bitcoin, which could be appealing to those who view direct ownership as too much of a hassle. However, the futures market can be quirky to newbies and necessitates training and experience to transact safely.

The third way is using Exchange Traded Funds (ETF). This is a marketable security that tracks an index or a basket of stocks, bonds, and/or commodities. For example, a gold ETF owns bars of gold and then issues shares that represent a percentage ownership of the gold being stored in the vault. These shares are then bought and sold in the same manner as equities on major stocks exchanges. However, the Securities and Exchange Commission (SEC) has yet to approve ETFs that hold actual bitcoins in the U.S (more on this below).

The fourth way is to invest in companies that are either in the business of crypto and/or own lots of bitcoins. However, stock ownership exposes an investor to company risk. For example, if a bitcoin exchange were to get hacked, an investor could be at risk if the company files for bankruptcy (even if the price of bitcoin flies higher).

How Did BITO Pull It Off?

Think about it this way. The SEC cannot restrict us from buying a gold watch, but they can decide whether we can own a gold ETF. The SEC has no issue with gold ETFs because it’s presumably easy to ensure the gold backing the ETF is safe and secure. These funds store gold in vaults and get audited by reputable accounting firms. Barring a heist out of a Hollywood script, that gold is going nowhere.

But bitcoin isn’t gold. It’s hard to go a month without a story of yet another bitcoin exchange and/or custodian getting hacked. Think about the ramifications of an SEC-approved bitcoin ETF losing all its bitcoins to a hacker. The blowback against the agency would be cataclysmic.

Futures contracts can’t get hacked. They are just a derivative of the price of bitcoin, so there’s no risk of theft or software bugs. Participants in futures markets are also required to collateralize their trades, so the odds that shareholders in an ETF holding futures could lose their investment due to malfeasance is infinitesimally small.

However, that doesn’t mean these ETFs are without risk. If anything, the SEC has simply traded one less likely risk (hacking) for a more likely risk (decoupling). To see why, let’s dig deeper into one of the most popular futures-based ETFs out there.

The United States Oil Fund (ticker: USO) attempts to track the daily price movements of U.S. crude oil. The ETF has done a decent job at tracking U.S. oil over the span of a few days/weeks, but it has been abysmal over the long run. That’s because USO and most other ETFs that market themselves as a way to get exposure to oil don’t actually own oil.

Oil is difficult and expensive to store, so USO owns futures contracts instead. Meaning, when an investor buys USO, they own a fractional share on a futures contract rather than barrels of oil. There is a big difference between a barrel of oil and a futures contract. Oil just sits there until consumed, whereas a contract is the right to buy and sell over a finite time period. Once that contract expires, the transaction gets executed and goes away.

Since USO buys futures contracts, the fund must also roll its contracts to keep the money in the fund invested. The problem is that costs associated with buying and selling so many contracts combined with the mechanics of these contract has led this fund to stray far away from the price of oil.

In fact, USO lost over 96% of its value since it began trading in April 2006 through April 2020 (chart below) due to its inability to track oil. Even after the surge in oil this year, it’s still down over 89% since inception. 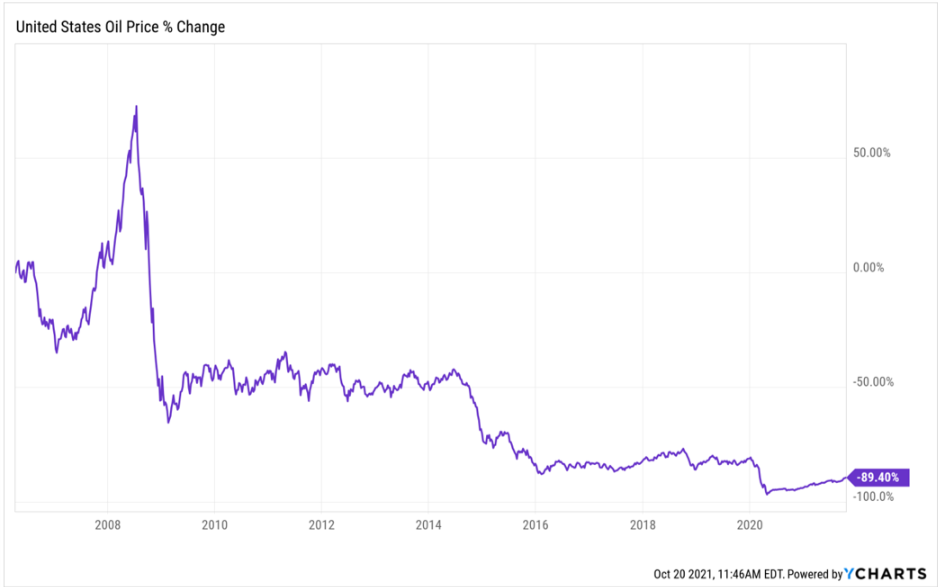 There’s no way to know for sure if the same fate awaits BITO, but the risk is there because they are both bound by the mechanics that govern futures contracts and the market in which they trade.

It makes sense that anyone buying a bitcoin ETF would assume they own bitcoin just as an oil ETF owner would assume they own oil. But that’s not how it always works in this business. Furthermore, BITO is attempting something that’s never been done before by an untested management team, and early adopters of new technology know that the risk of bugs can be high.

To be clear, I see nothing inherently wrong with BITO, and it may end up being a huge success. There’s little question that demand exists for bitcoin ETFs. Canada and a few other countries have already approved real bitcoin ETFs, and many pundits believe that it’s just a matter of time before the SEC follows suit. However, I learned long ago to never bet on the outcome of a government decision, so I’m not holding my breath here.

The bottom line is that you should never, under any circumstances, invest in any fund without first reading the instruction manual. That way you know what you are getting yourself into before putting capital at risk.