Then COVID-19 and the government-mandated shutdown of the U.S. economy changed everything. Unprecedented stimulus packages from both the Federal Reserve and Congress appear to have alleviated the panic for now.

Looking forward, the country is in uncharted territory. Never before has the government attempted such bold moves to control a crisis, and the lack of a time-tested playbook leaves several questions unanswered.

The U.S. economy began the year firing on all cylinders. Unemployment was at record lows, inflation was little concern to the Fed, and wages were growing just enough to exceed inflation (creating real wealth for consumers). Corporate profitability was at or near all-time highs, and it was difficult to find a plausible recession forecast.

The Coronavirus was a story developing in the shadows of the impeachment hearings, but the initial data appeared immaterial and contained. Little did the world know at the time that China was orchestrating a cover up at the highest levels. According to Ian Bremmer at the Eurasia group, China suppressed and reprimanded the doctor that originally discovered the virus, kicked out foreign journalists and repressed Chinese coverage, and refused support from the World Health Organization (WHO) and the Center for Disease Control (CDC). This was taking place as millions were traveling from Wuhan, spreading the Coronavirus and creating the pandemic.

The U.S. government’s response to controlling the crisis was to shut down the economy, keep people in their homes, and attempt to “flatten the curve.” Few times in history have investors been faced with so much uncertainty. There is no playbook because the government has never parked the economy before. Hence, we probably won’t understand how the unintended consequences will shape the coming months until well after the crisis ends.

For now, the data that we have is grim. Retail sales plunged 8.7% in March, the biggest decline since the government started tracking the series in 19921. According to the Transportation Security Administration (TSA), 136,000 people went through a TSA checkpoint on April 1st. On the same day last year, the number was 2.15 million. That’s a drop of over 93%.

The chart above shows that 16.8 million people filed for jobless claims in the last three weeks through April 4th. This is around 10% of the entire U.S. workforce. St. Louis Federal Reserve President James Bullard estimated that the U.S. is facing $25 billion in lost output every day the economy remains shut down2.

While these numbers are staggering, there is a silver lining. It’s unlikely that politicians are indifferent to their constituents losing their jobs overnight (their own job security may be at risk come election time). Hence, bad economic data may actually be good if it pressures the government to roll back these draconian restrictions.

The government also has a history of overreacting and then correcting. The financial crisis is a prime example. Years of lax regulation got replaced with so much regulation that banks were practically restricted from earning any profit. Over time, rules were loosened but not removed.

We may see a similar pattern soon. Governors from 10 states (representing 38% of the U.S. economy) want to turn on parts of their respective state’s economy3. President Trump has also indicated that his administration may act soon.

But this probably won’t be like flipping a switch. Even if the government says it is ok to leave the house, will it get business travelers back on planes? Will it inspire executives to pursue expansion plans that were drafted back in February? For those that were let go, will they willingly return to their former employer? Or will they seek more stability elsewhere?

Unintended consequences cut both ways, so it’s doubtful that all will be bad. The Troubled Asset Relief Program (TARP), which helped the country emerge from the financial crisis, did more than just save key industries. It also earned a positive return on investment to the tune of more than $11 billion for taxpayers4.

Furthermore, how does this pandemic alter the future? How many board room discussions are currently underway about moving their supply chains? How much of this economic activity will come back home to the U.S. over the next decade? If an infrastructure bill passes, how will this change the composition of gross domestic product? How will improved infrastructure increase the competitiveness of the U.S.?

The pandemic has also created the urgency to try out new ideas. Overnight, we built a digital infrastructure to support distributed workforces and remote work. How will this impact large cities and productivity now that the pipes have been laid for people to work from anywhere? How could time spent traveling to see clients get reallocated?

Simply put, while there are questions that we may not want to know the answer to, there are probably just as many that we do.

Mike Tyson famously said, “Everyone has a plan until they get punched in the mouth.” It’s safe to say that few anticipated a global pandemic and shutdown of the U.S. economy back in January.  Hence, the last few weeks of the quarter felt like an uppercut to most. The table below shows the selloff that began on February 19th turned into the fastest 30% drawdown in history – taking only 22 days.

What continued through March 23rd could only be described as textbook panic selling. Volatility, as measured by the CBOE Volatility Index, or VIX, reached levels unseen since the depths of the financial crisis. Three of the twenty worst days in the history of the S&P 500 occurred during March5. The third worst day ever was March 16th, when the index fell almost 12%. The sixth worst day was just four days prior with a 9.5% loss.

The panic was by no means contained to just stocks. The bond market got its fair share. For example, several bond funds saw their price fall below the total value of the bonds within them. This shouldn’t happen. How could a bond fund be worth less than the value of the bonds inside it?

The answer has to do with liquidity. Exchange Traded Funds (ETFs) look like mutual funds but trade like stocks. Individual bonds don’t trade like stocks, and some bonds can take weeks to sell in a good market. In a bad one where most buyers leave, they may not sell at all. This “liquidity mismatch” created massive spreads between ETF prices (set by the stock market) and NAVs (set by the bond market) like the one in the chart below for one of the largest bond ETFs on the planet. 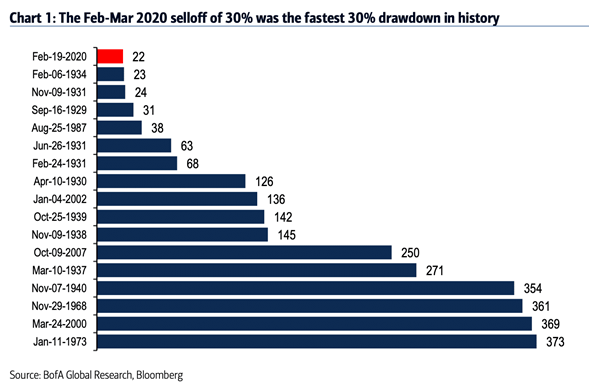 Anomalies like these prompted the Federal Reserve (Fed) to act quickly. They announced several programs to lend directly to both large and small businesses. Typically, if the Fed wants to make money available, they use J.P. Morgan, Citigroup, and other banks as intermediaries. They give the banks the cash, and the banks make loans to companies and consumers.

However, the Fed appeared to be worried that the dysfunction in Congress and bureaucracy of large commercial banks could delay the financial support that was desperately needed. So, for the first time in history, the Fed chose to bypass the banks for emergency loans. Days later, Congress finally answered the call and announced the largest fiscal stimulus package in our nation’s history at $2.2 trillion.

The bold moves by the Fed to keep the plumbing of the financial system moving combined with fiscal support from Congress enabled key financial markets to function properly again. While it may be too early to call a bottom, at least the panic appears to have subsided.

Lastly, in any other time period, what transpired in the energy sector in March would have been the only story in town. Global demand for crude cratered due to COVID-19, and a tiff between Saudi Arabia and Russia caused supply to surge to record levels. The ensuing volatility was some of the most violent ever witnessed in energy markets. 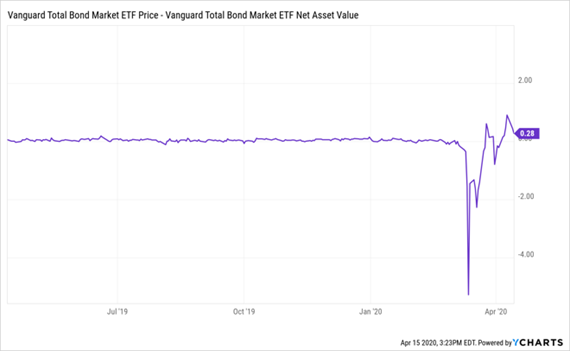 While there may be short-term pain, the long-term benefits of cheap energy for the U.S. economy should justify the means. Darwinism also tends to favor those who innovate, so this does not have to be a zero-sum game between energy producers and consumers. The last price war in 2014 taught us this. The U.S. became the largest energy producer in the world, and oil prices remained well below $100/barrel.

I usually avoid making bold predictions on the future because I will either be lucky (less likely) or wrong (more likely). I don’t have a crystal ball, nor could I ever feel confident about forecasting a future that is so heavily dependent upon government action.

Apparently, I’m not alone. As we enter earnings season for the first quarter, several large companies including General Electric, Federal Express, Starbucks, and Danaher have suspended “forward guidance” (forecasts by management on future prospects and profitability). This makes sense. How could anyone have a clear view into the future with so many unknowns?

But I do spend a lot of time thinking about the range of outcomes, and if pressed, I’d wager that we see a recovery sooner than later (V-shape recovery). The government appears to be acutely aware that they need to turn the economy back on (albeit slowly). Furthermore, this first wave of stimulus may only be the beginning. We are a wealthy nation, and our ability to throw money at this crisis is a powerful (albeit finite) weapon.

What if I am wrong? What happens if the government drops the ball? What if the economy is shut down for too long, too many people lose too many jobs, and we must stomach a U-shape recovery?

If this happens then so be it. There’s an old saying that “you make the most money in bear markets, you just don’t know it at the time.” The shape of the recovery is a mystery, but the end result is less of one. Nothing about this crisis leads me to believe that it is a precursor to a zombie apocalypse. If so, history will depict this time period as more of an opportunity for patient investors than a trap.

The bottom line is that nobody knows for sure how long the economy will remain on sick leave, but it will recover. For now, focus more on your own health and try to stay sane while sheltered in place.

This material has been prepared for informational purposes only and should not be construed as a solicitation to effect, or attempt to effect, either transactions in securities or the rendering of personalized investment advice. This material is not intended to provide, and should not be relied on for tax, legal, accounting, or other financial advice. Jay Street does not provide tax, legal or accounting advice. You should consult your own tax, legal, and accounting advisors before engaging in any transaction. Asset allocation and diversification do not guarantee a profit or protect against a loss. All references to potential future developments or outcomes are strictly the views and opinions of Jay Street and in no way promise, guarantee, or seek to predict with any certainty what may or may not occur in various economies and investment markets. Past performance is not necessarily indicative of future performance.