Midterm elections are less than three months away, and both political parties are already at war. With so much on the line, what can investors do to mentally prepare for what could become the most contentious election cycle in years?

Charlie Munger quoted this old maxim in his seminal classic, The Psychology of Misjudgment:

“Politics is the art of marshalling hatreds”

Midterm elections are less than three months away, and the marshalling has already begun. The Republicans are already trying to convince the country that we’re in a horrific recession that can only be cured with new leadership. The Democrats are pushing back by debating the true definition “recession.” The gloves are off.

This was the case after Barack Obama won his re-election in 2012. The very next day, the market began a steep decline that sent the index down over 5.5% in a single week1. The market reaction seemed justified to those who disagreed with his politics. This cohort prophesized that Obama’s policies towards big business and his scheme to take over healthcare were going to bankrupt America. Hence, a drop in an index that depends on the future health of the American economy made a lot of sense.

However, the S&P 500 recovered within a month. It was as if all the harm that Obama could do magically disappeared. In fact, the market rose over 50% through 2015, and more than tripled during his presidency1.

The same goes for Republicans. Back in 2002, President Bush enacted a myriad of controversial policy decisions including cutting taxes and spending like a Democrat (expanding the deficit). He fought an unpopular war and was vilified for acting as the world’s police at the expense of taxpayers. However, the S&P 500 did not seem to notice for too long. The market almost doubled through the end of 20071.

Two parties with opposing views, yet both times the stock market surged. Were the Republicans wrong to think Obama was bad for business? Did the Democrats make false assumptions about the impact of Bush’s foreign policy?

Consider where most of the world’s innovation and entrepreneurship is being born. Self-driving cars, breakthroughs in cancer treatments, taxis on demand, 3D printing, cell phones that act as credit cards, virtual reality, fracking, and so many other world-changing ideas were conceived and commercialized here under both Democrat and Republican leadership.

By analyzing five differences between politics and policy, the impact of each on the economy becomes more evident:

1.      Substance: Politics allow a candidate to make claims that have no basis or support of any kind. Policy is an actual plan comprised of several moving parts that are vetted through committees to ensure thoroughness.

2.      Commitment: Politics allow a candidate to make promises they don’t intend to keep. Policy requires enforcing what is passed into law, which often restricts the ability to roll back legislation once it has been implemented.

3.      Speed: Politics move at warp speed because promises are just words. Policy moves at a snail’s pace due to endless amounts of red tape and the checks and balances of the government.

4.      Accountability: Politicians will say anything on the campaign trail with no expectation to deliver. Those who create policy are held accountable and are expected to deliver.

5.      Flexibility: A politician can promise one thing to an audience today and the exact opposite to a different audience tomorrow. Once policy is executed, making changes can often be more difficult than the initial implementation. 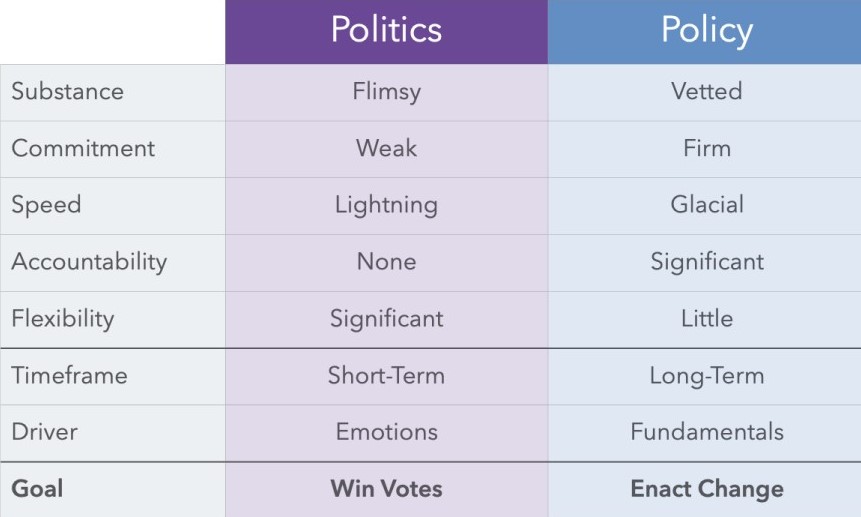 Add it all up and the goal of politics is to win votes (short-term), whereas policy governs and enacts change (long-term). These contrasting features of politics and policy make their impact on the economy and financial markets noticeably different. That’s why we tend to see big reactions in the stock market after an election. Politics (emotions) fuel markets briefly, however emotions usually don’t last long enough to alter our $22 trillion economy.

Policy is what matters because it converts talk into action. But this process is also designed to kill most ideas and only implement those that have passed a series of reviews from key stakeholders. Even after policy is passed, the effects can often take years to be felt.

For example, go back to 2009, when Obama was in the White House and Democrats controlled Congress. Despite a clear path to healthcare policy, it still took over six years for plans to be made available. Trump campaigned on tax reform and a wall on the southern border, but neither was addressed overnight either.

Emotions are what distinguish us from machines. They are why we can love, laugh, and smile, and they also keep us safe from harm (a scary noise in a dark alley causes the body’s senses to heighten for survival). As important as it is to embrace them, emotions also wreak havoc on our decisions. Recall the last time your emotions got the best of you and resulted in a decision void of all logic and reasoning. Was the outcome favorable?

A few years ago, I woke up in a hotel room and stubbed my toe on a poorly placed coffee table. I got so mad at this inanimate object that I slammed my fist down upon it to teach it a lesson. Had I only stopped for a moment to assess the situation, I would have realized that this coffee table was probably not going to learn the error of its ways, and my wrist could have been spared weeks of pain.

Few emotions impact decisions more than political ones, and the examples above show how politics can create unnecessary risk. For example, had an investor who feared for the future of America sold into the panic after Obama won his reelection, think about the gains they would have missed (the same goes for Trump in 2016).

That’s not to say investors should ignore politics. We must pay close attention to D.C. because they set the rules. The key to success is to assess all possible outcomes from an election or policy change, determine the impact of each (without injecting one’s political beliefs), and then formulate a plan that attempts to profit in each outcome. That way, an investor can prepare for most scenarios and mitigate the risk of an emotionally fueled decision.