There’s simply no way to sugarcoat the first half of the year. It’s been tough for pretty much everyone, and weeks like these test the resolve of even the most disciplined investors. Now that we’re officially in a bear market, what should we do next?

The chart below chronicles historical drawdowns for a conservative allocation of 90% bonds and 10% stocks over the last 26 years. The dotted line represents the average drawdown at 0.87%. Since November 2021, this conservative portfolio is down almost 13%. That’s 15-times larger than the average during a period that captures three of the worst recessions in history. 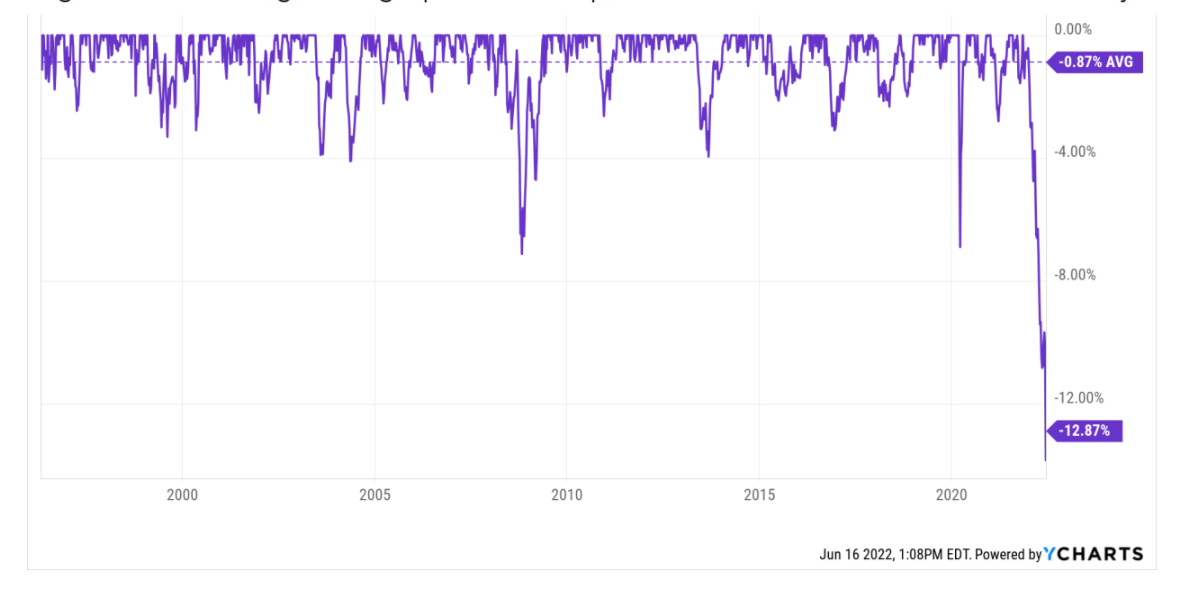 The next chart shows the same for a moderate allocation of 40% bonds and 60% stocks. Here, the average is just over 4%, while the recent drawdown is over four times larger at 17%. That’s painful but by no means the worst we’ve encountered.

Now, let’s look at the same chart for an aggressive allocation of 10% bonds and 90% stocks. The average drawdown is around 8.5%, while the current one is more than twice as large at 19%. Again, it’s been painful but not the worst ever. In fact, the 2001 and 2008 recessions were materially worse than what’s happened since November.

Three observations are worth discussing. First, conservative investors are feeling pain right now that they’ve likely never experienced before. Being down this much in just six months is not only rare, it hasn’t happened in over four decades.

Second, diversification is meant to smooth the ride out over time. Since so many conservative investments like Treasury bonds and high-grade corporate debt have been pummeled, there’s been nowhere to hide for disciplined investors who take a longer-term view.

Third, and most importantly, every historical drawdown has not only been temporary but also the foundation for a new phase of growth higher. In fact, despite an average intra-year decline of 14%, annual total returns were positive 35 of the last 42 years1. The years that endured a 10% or greater drawdown still delivered a positive total return 75% of the time, and just over half of the years that had a drawdown of 15% or more also delivered a positive total return.

Said another way, most drawdowns have been short-lived, and not a single drawdown – irrespective of risk tolerance – inflicted permanent damage to a diversified strategy. It’s unlikely that this time will be different.

There’s simply no way to sugarcoat the first half of the year. It’s been tough for pretty much everyone. Even sitting in cash has been no picnic. Based on the headline rate of inflation right now, a million dollars in cash is losing $86,000 annually to inflation. Those who spend more on the categories below are getting hit even harder. 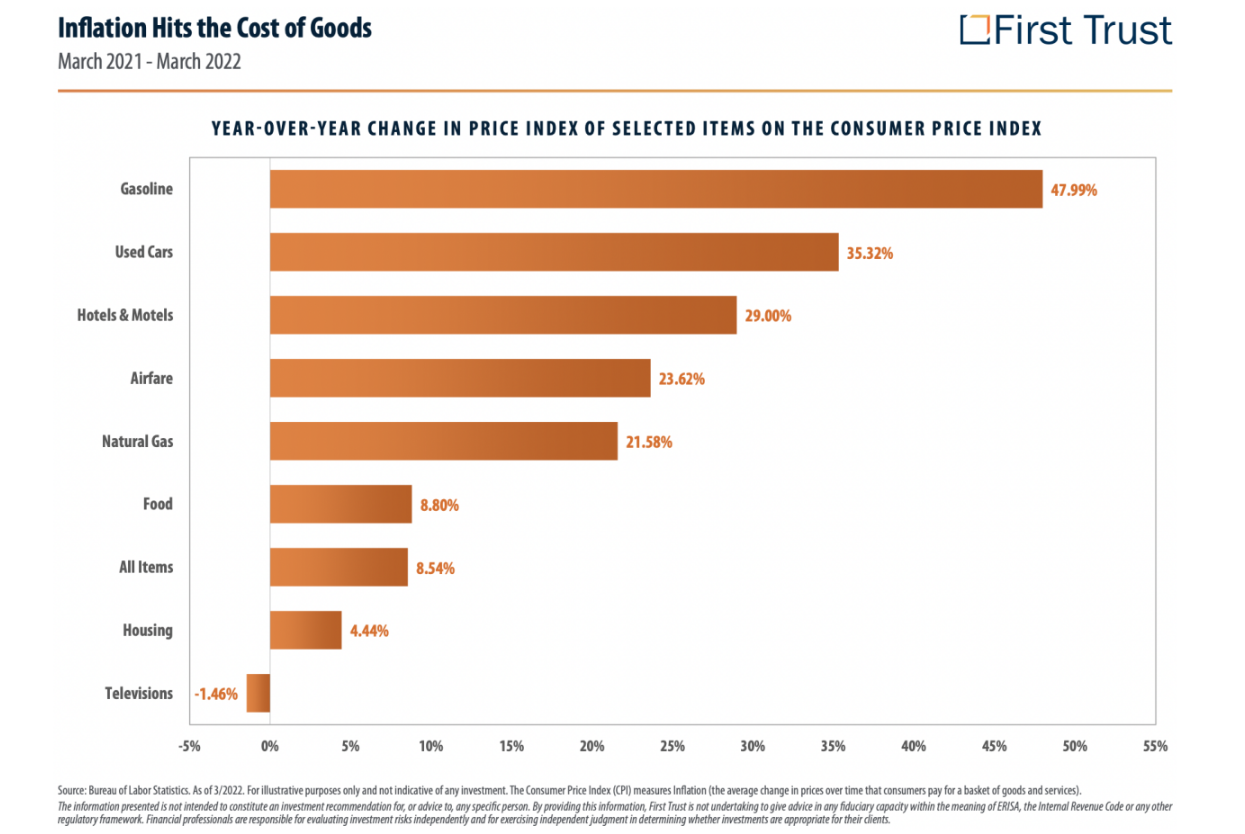 Now, some may argue that a guaranteed loss of 8.6% in cash is better than the risk of a greater loss elsewhere, but it’s not that simple. Let’s say you timed the downturn perfectly and moved to cash at the end of last year.

Unless you began investing within the past year or two, you are probably still up over the last decade. If so, then your taxable accounts are subject to capital gains. Furthermore, you need to know when to get back in or else the “cash drag” could become an anchor to future returns. Hence, running to cash does little more than trade “market risk” for “execution risk.” Paper losses come and go, but realized mistakes can become permanent.

Another option would have been to make a tactical move away from a diversified strategy into a highly concentrated one. For example, the Energy Select Sector Exchange Traded Fund (ticker: XLE) is up 50% so far this year1. Had an investor looked into a crystal ball and built a portfolio consisting of 30% XLE and 70% SPY (the S&P 500 Index ETF), they’d be flat today.

But extreme moves like these also carry tremendous risk. It’s so much that no reputable compliance department would permit any conservative or moderate investor to move to an all-equity portfolio. Even aggressive investors would be betting big on a highly volatile sector that had done virtually nothing in aggregate over the last two decades.

The problem is that the “would have, could have” rhetoric doesn’t change the fact that we’re here - stuck in a bear market, waking up every morning wondering if this will be the day when the pain subsides. So, what do we do if cash and timing markets are suboptimal choices?

Right about now, a braver man than I would utter those three words that no investor wants to hear. But I’m keeping my mouth shut because “stay the course” is often so misinterpreted that it can do more harm than good.

In the olden days, it meant sticking to the strategy as long as it remained capable of reaching the goal. It championed the dismissal of factors that were either temporary or noisy and demanded the discipline to continually test assumptions and adjust to real economic change.

But somehow it mutated into “bury your head in the sand,” which could be the worst possible advice to give any investor. Economies and financial markets are constantly changing, so any strategy predicated on the notion of “setting it and forgetting it” like it’s some rotisserie oven is arguably just as risky as day trading through volatility.

Here’s our plan. This is not the first bear market we’ve experienced, and it most certainly will not be the last. The course we plan to stay on is one that is deeply rooted in fundamental analysis and adapting to all phases of the economic cycle. In doing so, we will continue to make incremental changes to our investments to manage the risk over the long run and avoid the temptation to react to the fear and panic dominating the day-to-day.

We also plan to keep building financial plans consisting of more than just stock and bond portfolios. Tools like insurance, guaranteed income, cash flow analyses, and stress testing plans using 50,000+ simulations all work together to keep investors on course. That way, the financial plan can take a hit and keep going because it isn’t relying on a singular tool.

The bottom line is that “staying the course” only makes sense when the course is (1) built to evolve over time, and (2) capable of taking you to your financial goals.