These companies, also known as Big Tech, did so to avoid the “risk of further incitement of violence” (Twitter’s words not mine) upon the aftermath of protests at the Capitol last week. While many appear to support Big Tech’s decision, others have raised concerns over freedom of speech and anti-competitive behavior.

Investors are also asking how these events could impact their portfolios going forward. It’s an important question too. Not only did the tech sector surge last year, but also over 21% of the S&P 500 and 39% of the Nasdaq 100 indexes are comprised of just six technology stocks1. Meaning, anyone holding any fund tied to either index has a vested interest in Big Tech’s future. Let’s see what could be in store for some of the largest and most powerful companies in the world by assessing the potential downside from these controversial decisions.

To start, let’s first address whether Big Tech can legally do what they did, and the answer is yes. These are private companies with terms and conditions (T&C) that enable them to remove users as they deem appropriate. Some may argue that there is subjectivity in these decisions, by evidence that some violators get suspended while others do not, but these T&Cs are written in a way that gives management full discretion.

That being said, one notable feature about our legal system is that anyone can sue anyone at any time for any reason. Contracts are subject to interpretation, and judicial decisions are often unpredictable. Parler has already filed a lawsuit against Amazon, but this is probably going to be a long and expensive fight. Amazon has incredibly deep pockets and a large and experienced legal team. It’s unlikely that legal action from Parler will do anything to impact Amazon’s business.

But just because these companies can censor and ban doesn’t necessarily mean it is a good idea for the future of their stock price. It’s likely that customers upset with these decisions will defect. Some may limit engagement while others will cancel accounts and outright boycott.

If so, this could impact earnings because many of these companies rely on eyeballs to make advertisers happy. It’s hard to say just how many customers will react in such a manner, but to make any impact, the number would need to be significant. Given the lack of competition and stickiness of many of Big Tech’s products and services, any major impact seems unlikely.

The second risk is heightened regulatory scrutiny. Big Tech has had this power for many years but never wielded it. Now that the cat is out of the bag, it could ignite regulatory scrutiny in ways they may not have considered or simply miscalculated.

For example, the one commonality amongst politicians is that they don’t like companies having more perceived power than the government. Democrats and Republicans may view limiting this power as a common goal and work together to reign in Big Tech.

Near-term regulation would most likely target an increased focus on privacy, security, and liability. These companies know everything about everyone, and Big Tech may be forced to spend more to ensure this information is protected and privacy is respected. This will translate to higher operational costs but unlikely to materially change their businesses unless they were to lose key liability protections.

There could also be fines. It’s doubtful that the actions over the last week, on their own, would lead to regulatory fines, but regulators could use this as an excuse to dig deeper into their business practices. Most of these companies are monopolies, so finding a reason to fine them probably wouldn’t take too long. Fines also impact earnings, but these tend to be one-time events and forgotten quickly.

Longer term, the bigger perceived risk is that the government breaks them up. The Department of Justice (DOJ) recently filed lawsuits against Google and Facebook, and more could come. However, there are three important points to consider.

First, there is an incredibly high burden of proof because the government has to show that there has been consumer harm. Furthermore, acquiring a competitor is usually not enough to win an antitrust case, and given the DOJ approved several of the acquisitions that helped Big Tech become what it is today, it may make their case even more difficult to win.

Second, even if the government were to prove that Big Tech is hurting consumers, this fight could live in the courts for years. Tack on the time it would take to physically break up companies of this size, and it could be a decade or longer ordeal. This is way past most investors’ ability to forecast.

Third, breaking up Big Tech may not necessarily be a bad outcome for investors. It could be argued that these companies are too diversified. Breaking them up may make the sum of the parts worth more than the whole. If so, shareholders could benefit greatly from any forced break up.

Another long-term risk to Big Tech is decentralization. Other corporate customers may be waking up to the realization that Big Tech has a lot of power and can squash any competitor they deem to be a threat. If so, this may influence operational decisions to avoid too much supplier concentration.

This is analogous to what is happening in board rooms of those companies that relied too heavily on China over the last several years. When most of your supply chain is centralized in a single location, and then that location is shut down indefinitely, the future of your business is at risk.

That’s why diversifying supply chains is a hot topic of conversation these days. Executives that put all their eggs in one basket learned a harsh lesson last year, and similar discussions on Big Tech may begin to show up on boardroom agendas in the not-so-distant future.

Back in September 2018, Nike announced that Colin Kaepernick would be the face of the 30th anniversary “Just Do It” campaign. Kaepernick’s decision two years prior to kneel during the national anthem as a way to raise awareness on social justice issues made him a controversial figure in sports.

Following the announcement, Nike’s stock fell three percent in early trading. Numerous groups called for a boycott of the company, including videos being posted on social media of people burning their own Nike products in anger.

Fast forward to today, and the chart below shows that Nike is up over 83% including dividends. You would need a magnifying glass to see the impact of the controversy stemming from that announcement. That’s because Nike is an enormous company with several revenue streams, and the number of people burning shoes was probably small relative to those that were not (despite the media attention). 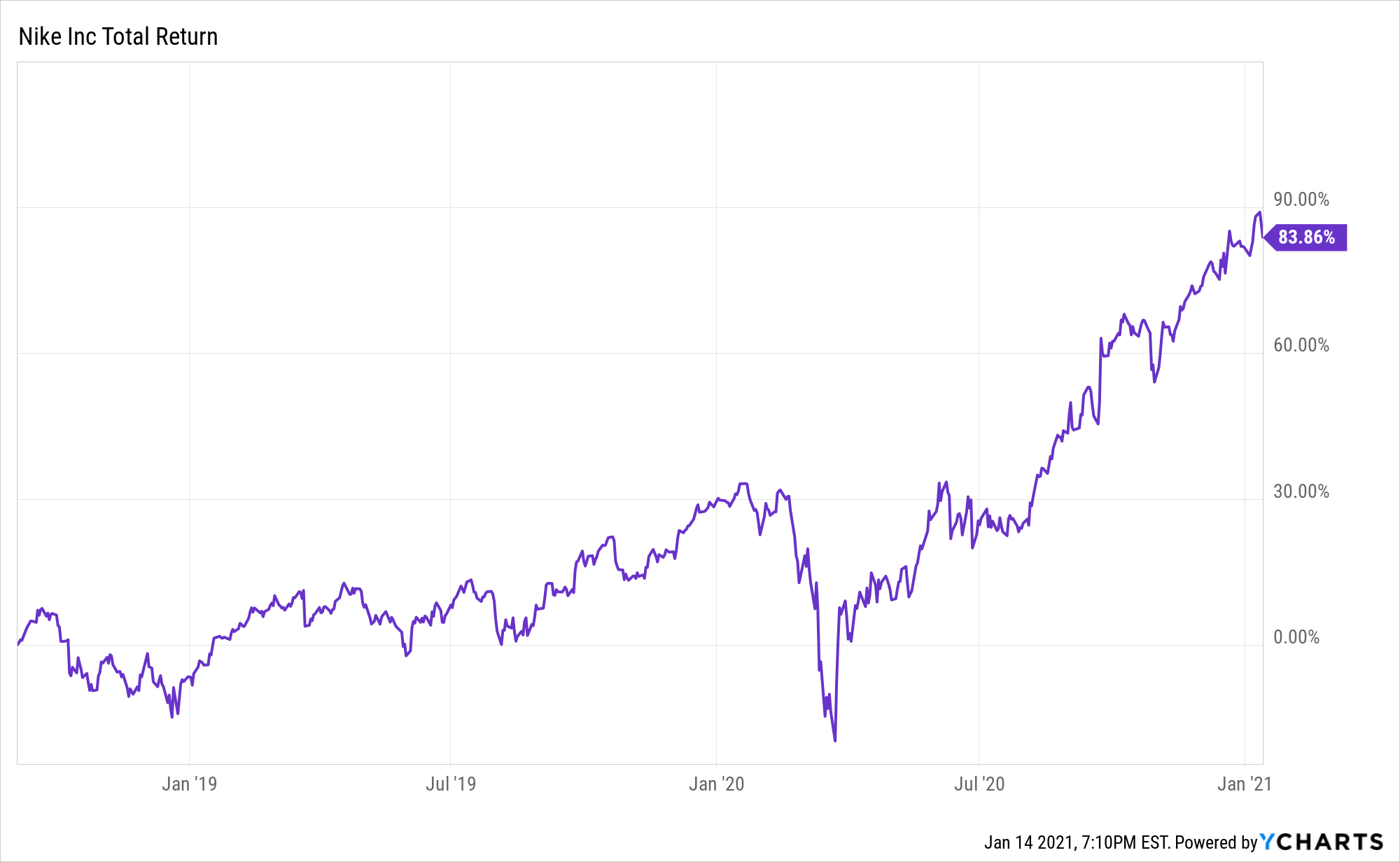 But when it comes to investing, ideologies have no place and only pose risk to meeting financial goals. As it stands today, Big Tech represents a group of gigantic cash machines that enjoy monopoly profits and have fortress balance sheets. They are also globally diversified, attract the best talent, and are driving much of the innovation that’s shaping the world. It took years for these companies to achieve this dominance, and it will almost certainly take many years for it to erode (if at all).

Just look at the numbers. Some of these companies have more revenue than GDP of small countries. Market caps often exceeds $1 trillion. Sure, they may lose some business but think about just how many would need to defect to make any material impact. Then think about how slow the government moves and apply this to any regulatory response. It could take several years before anything were to change. Along the way, Big Tech will continue to print money.

Lastly, don’t view this as an endorsement to turn a blind eye to personal convictions for the sole purpose of profit. The goal here is the exact opposite. Keep your beliefs but channel them in a far more effective way. Here’s how to do it.

First, remove all emotion from your portfolio and maintain a strict focus on picking investments that have the potential to deliver attractive returns and improve diversification. Then, if a gain is realized on an investment that conflicts with a belief, take those proceeds and donate them to a charity that you support. Not only will you be making a more powerful impact, but you may also qualify for a tax deduction.

The bottom line is that this is not the first time a controversial decision has been made by a publicly traded company, and it won’t be the last. Just be sure the reasons to buy/boycott a product are kept separate from the reasons to buy/sell a stock.