Morgan Housel is a well-regarded financial columnist, and back in October 2019, he published an excellent article explaining why major technological innovations take a long time to “change the world.” His theory is that the slow pace of adoption has more to do with acceptance and behavior than it does with getting the technology right. However, one exception he chronicled was the release of the polio vaccine in 19551:

“The polio vaccine is an outlier in the history of new technology because of the speed at which it was adopted. It is perhaps the lone exception to the rule that new technology has to suffer years of ignorance before people take it seriously. I don’t know of anything else like it.

You might think it was quickly adopted because it saved lives. But a far more important medical breakthrough of the 20th century – penicillin – took almost 20 years from the time it was discovered until it was used in hospitals. Ten times as many died in car accidents as from polio in the early 1950s, but it took half a century for seat belts to become a standard feature in cars.”

He has a valid point. Polio was a serious problem, but the world has faced many problems that were solved through innovation and urgency only to sit on the shelf for years before widespread adoption. Nobody really knows why polio got so much attention or what inspired tens of millions of Americans to rush to take the shot immediately after it was released. Perhaps it was the risk to children or public awareness campaigns. Whatever it was, the wisdom of crowds (the idea that the many are smarter than the few) prevailed and created unprecedented demand overnight.

Investors appear to be breathing a collective sigh of relief after news that more than one COVID-19 vaccine is days away from regulatory approval. The stated efficacy rates of the two leading vaccines exceed 94%, which indicate that the technology not only works but works extremely well.

But this news doesn’t necessarily imply that Americans will rush to get immunized like they did for polio. As Mr. Housel astutely observes, getting the technology right is the easy part. The hard part is convincing people to use it, and there are three legitimate hurdles that could prolong adoption. Let’s explore these hurdles in greater detail and then assess the potential impact to investors.

The first hurdle is availability. Per the chart below, Ariande Labs estimates that there are 144 million Americans who will most likely qualify for priority treatment. The two horizontal bars depict two potential scenarios of when various groups will be eligible to get the shots. Given today’s political environment and the seemingly  endless list of “hot button” issues, there is an extremely high probability that this entire process will become politicized. Driving consensus on which demographics and cohorts are deemed “priority” could slow things down considerably. 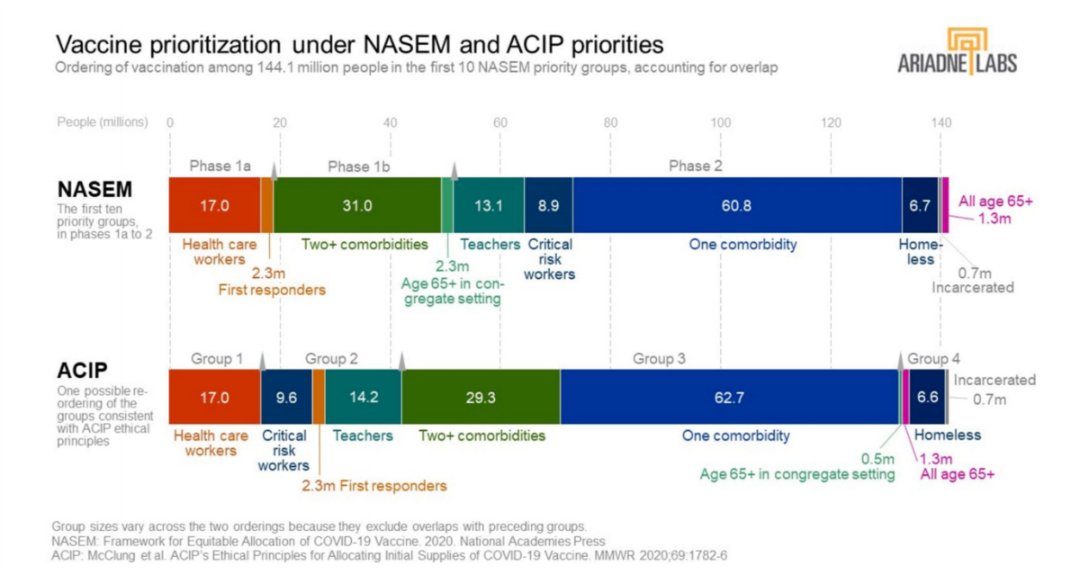 Furthermore, supply and other logistical challenges remain. The chart below is from Dr. Bob Wachter, a prominent academic physician and author who has covered COVID-19 closely since the beginning. He estimates that based on statements made by Pfizer and Moderna (two leading vaccine makers), it would take until June 2021 to immunize all 144 million priority Americans. Meaning, even if the rollout goes relatively smooth, most Americans may not even have access to the shot until the second half of 2021.

The second hurdle is adoption. Not only are all of the current vaccines designed to prevent a virus that didn’t exist a year ago, the two frontrunners are based on an entirely new technology. As in, no vaccine in history has ever worked like this before. This is a lot of “new,” and when it comes to health and wellness, “new” generally isn’t a desired feature. There could be a lot of people who simply choose not to get inoculated for fear of the unknown.

Furthermore, COVID-19 isn’t polio. Kids are not dying, nor are people being relegated to a wheelchair for the rest of their lives. The table below even shows that the mortality rate is statistically insignificant2. Some may view the vaccine as unnecessary and not worth risking 1-2 days of side effects. 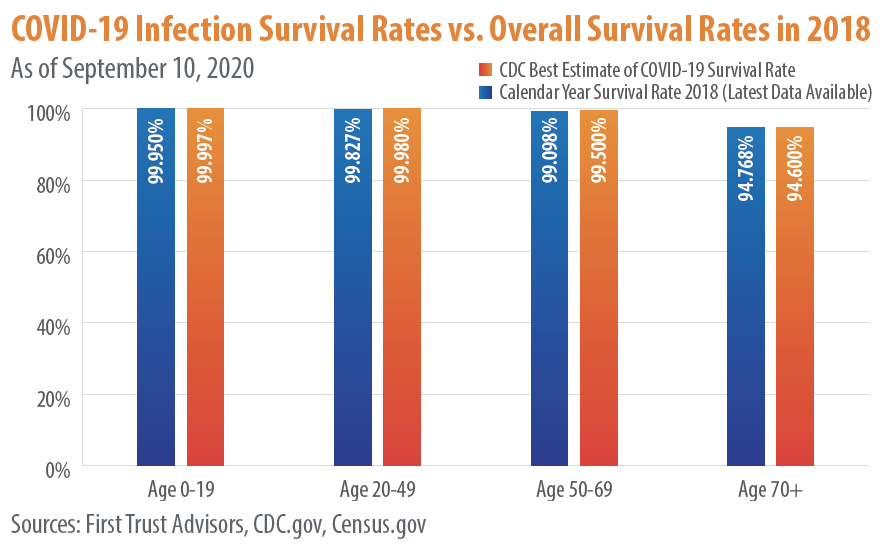 The third hurdle is the media and other sources of misinformation. A new National Bureau of Economic Research (NBER) working paper analyzed the tone of COVID-19 related English-language news articles written since January 1, 2020. Over 91% of stories by U.S. major media outlets were negative in tone versus 54% for non-U.S. major sources and 65% for scientific journals. The negativity of the U.S. major media was notable even in areas with positive scientific developments including school re-openings and vaccine trials4.

These vaccines are the dénouement to a story that has lived in the media for the past year, and it’s most likely going to end as a circus with fear and panic taking center stage. Here’s how easily this could happen. According to Dr. Wachter, if the U.S. vaccinates 10 million people, over the following two months, we can expect that3:

These numbers are purely based on average risk across the U.S. population. They could happen during any two-month span in any year, and none of these will have anything to do with COVID-19 vaccines. But will the media see it that way? Or will they spin the very first time someone is diagnosed with leukemia months after taking the shot? My bet is on the latter.

In the end, these vaccines are a really big deal and should be celebrated for what they are – one of the greatest achievements in history. But it’s important to maintain realistic expectations about how much longer we are going to be in this mess. Case numbers and deaths should soon drop exponentially as those at highest risk get the shot, but these hurdles and others could still create material headwinds towards herd immunity. Hence, investors should mentally prepare for a volatile 2021.

Let me be clear. I haven’t been this bullish for stocks in a long time, and the potential for volatility next year has almost no impact on my long-term outlook. We invest for the next three years, not the next three months, and any drama related to the vaccine rollout will be short-lived.

What will most likely persist are low interest rates, the economic recovery, corporate earnings growth, and the risk of rising inflation. All of these represent long-term drivers of stock prices that won’t be derailed by a few scary headlines.

Think about it this way. If I’m right and herd immunity takes longer than what appears to be baked into current expectations, that doesn’t change the extremely high likelihood that COVID-19 is going the way of the dodo bird. It lost and we won. This is all that should matter to long-term investors. Whether herd immunity happens in 2021 or 2022 is almost inconsequential.

If I’m wrong and the rollout goes faster than expected, even better. The market can put this in the rear-view mirror sooner, and these overly conservative expectations for a protracted herd immunity will look silly. Fine by me. I’d love to be wrong here.

But even if COVID-19 went away tomorrow, there’s going to be something else wreaking havoc on stock prices next year because there’s always something. This year was a pandemic, last year was fear over trade wars, and the year before that was concerns over rising interest rates. Next year will be no different, and enduring this volatility is the price to pay to acquire equity-like returns.

The bottom line is that the recent vaccine news has been a great way to end a crazy year, but that doesn’t mean it will be smooth sailing from here. Remain focused on the long term and put all your effort in the interim into staying healthy.