The economic data overwhelmingly suggest that the economy is growing, but what if it’s all wrong and we’re at the precipice of the next recession. How bad could it get this time, and what can investors do today to prepare?

Stocks go up on escalators and down in elevators. They’ve been in an elevator lately, and there’s no way to confidently estimate when they’ll reach the lobby. However, the table below provides some insight into what might happen when stocks get back on that escalator. Focus on the red dotted box first because it suggests that the larger the loss during a six-week losing streak, the better one year later. 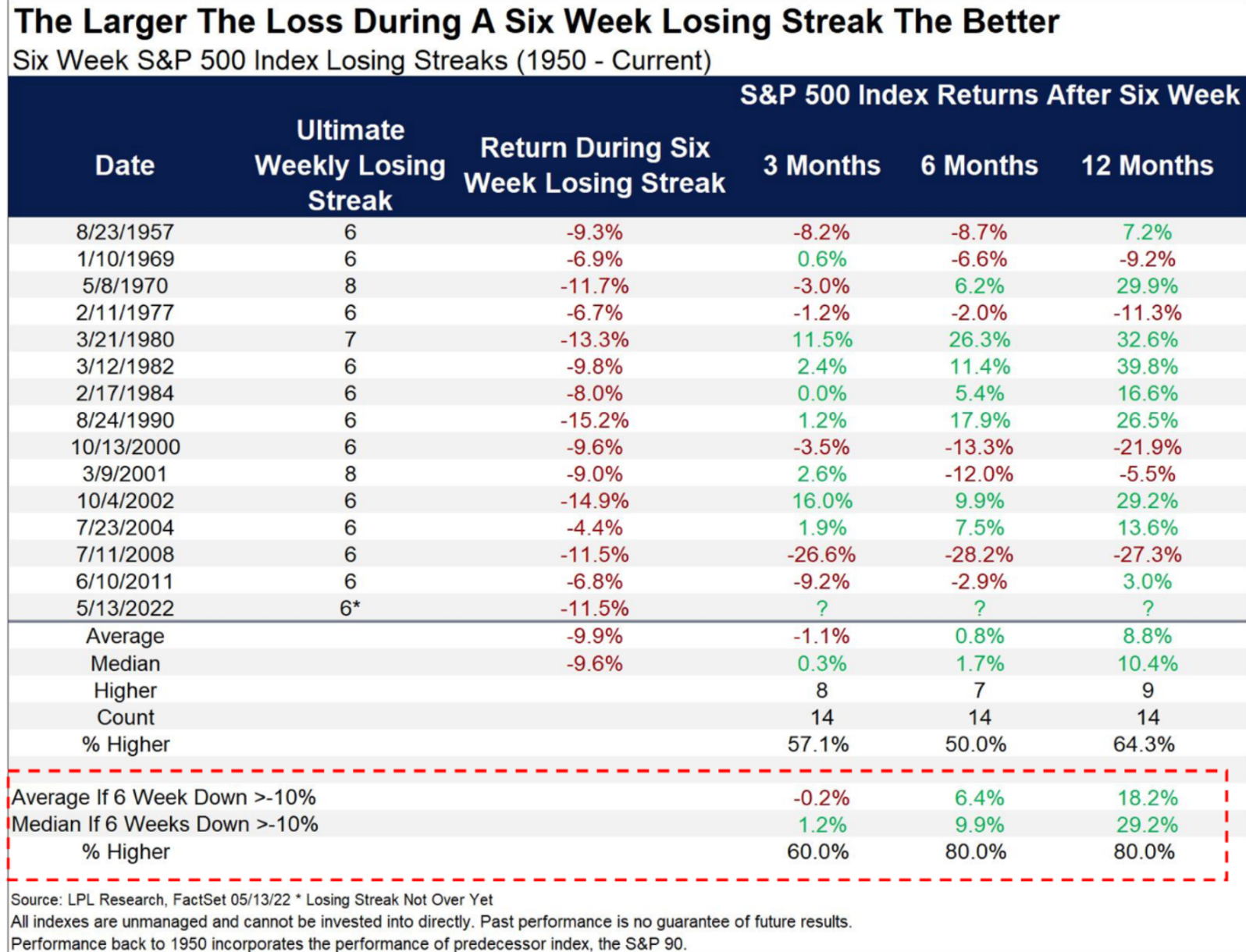 Since 1950, the median return of the S&P 500 has been +29.2% one year after a decline of 10% or greater (median is preferred to average because it excludes extreme outliers). Furthermore, the index has been up 80% of the time.

But not so fast! The two worst returns were in 2000 and 2008, which were right around the time of the last two “real” recessions (2020 wasn’t real because it was self-induced by the government’s decision to shut down the economy). Even if history suggests that this too shall pass, what if this is the beginning of another recession? How prepared is the country today versus other downturns in the past?

Almost 88% of U.S. economic activity comes from consumer spending (70%) and business spending (18%). Therefore, let’s assess how well consumers, businesses, and the banks that provide the capital to spend are prepared if a recession started today.

The net worth of American households has surged from $110 trillion to $137 trillion in the last two years1. Wealth creation like this is staggering, and it’s not just the rich getting richer. The table below shows that the bottom 50% saw the biggest percentage gain:

More net worth translates to a bigger cushion when compared to the years leading into the financial crisis and dot-com bust. Additionally, the chart below tracks debt payments as a percentage of personal income over time. Today, it’s close to a historic low, whereas back in 2008 it was at a high2. 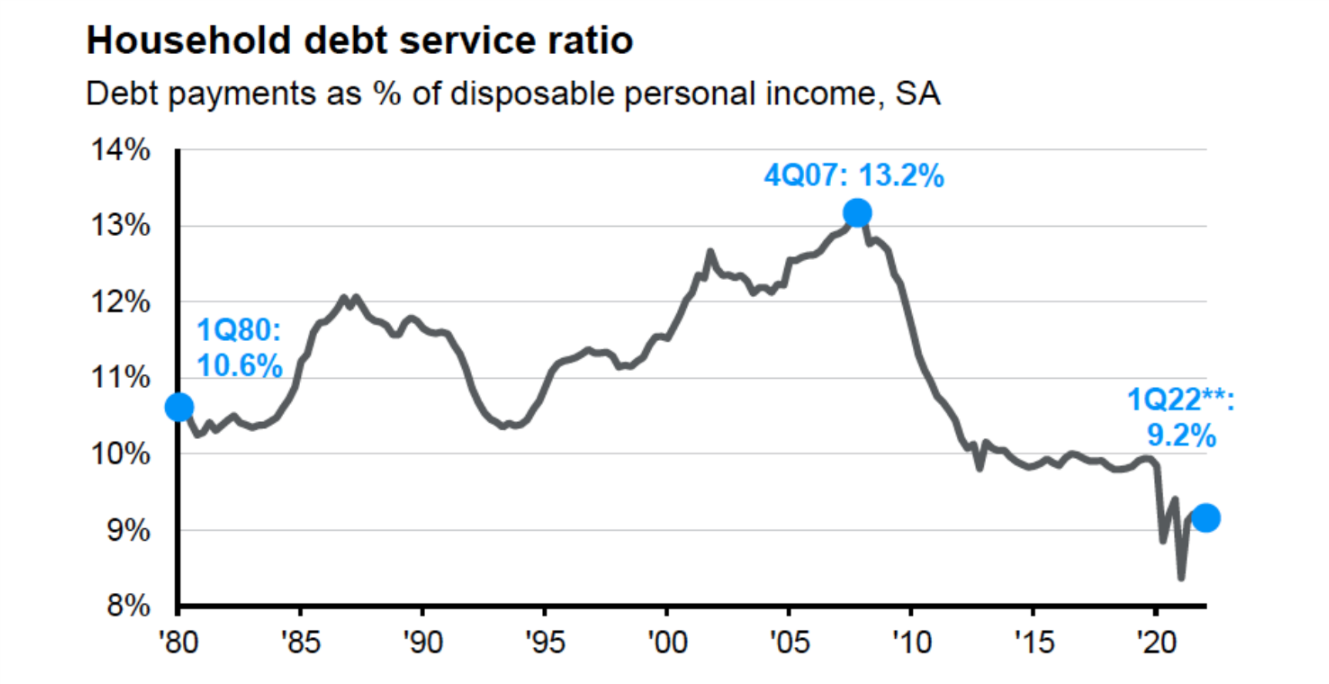 Thanks to the lockdowns and stimulus checks from Uncle Sam, the chart below shows the savings boom for Americans has been unprecedented. Over the last two years, Americans saved about $2.4 trillion more (blue line) than what would have been expected (red line). That’s a number we’ve never seen before.

Simply put, consumers have more income, less debt, and higher savings than in prior cycles. It’s not even close.

After the financial crisis, companies spent years improving their profitability. They cut costs, adopted technology to better control inventory, etc. Today, the chart below shows that not only are profit margins higher than in prior cycles, they’ve never been higher. That’s a big deal headed into a recession because stronger profits tend to lead to fewer decisions like layoffs and spending cuts. 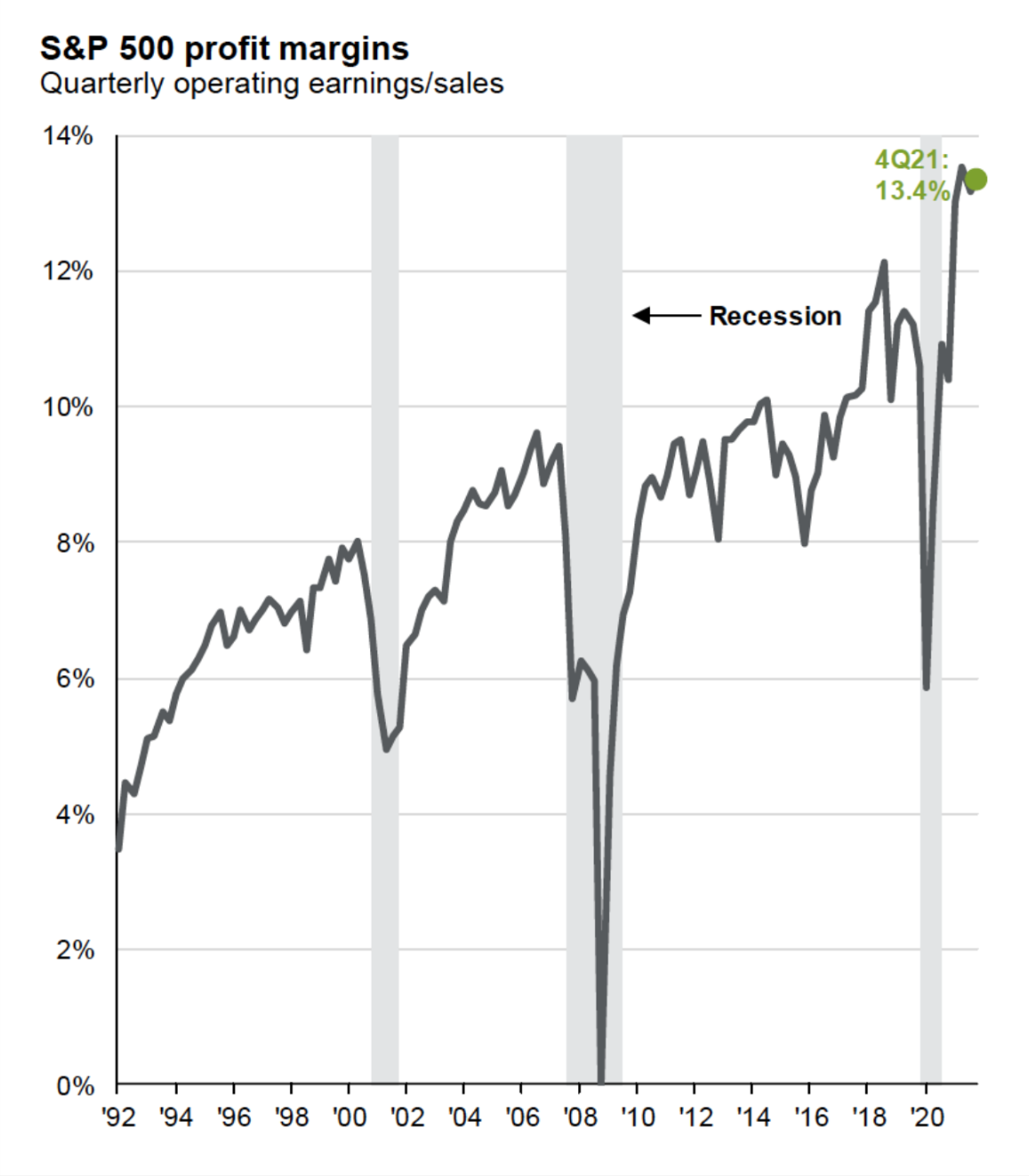 Just as deleveraging put consumers in a better spot today relative to 2008, it’s done the same for businesses. Today, the chart below shows that corporate balance sheets are the cleanest in decades by comparing debt to earnings. 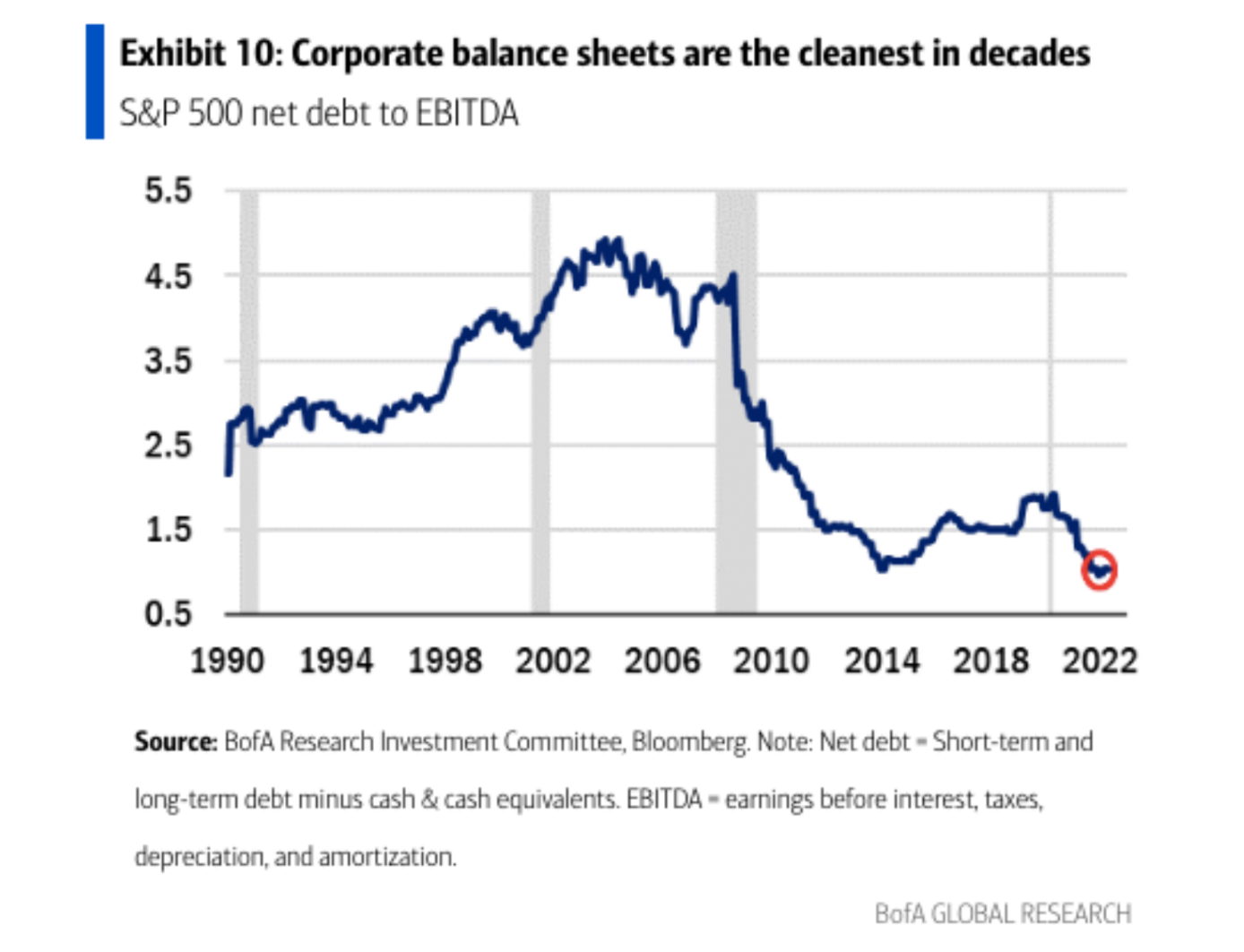 Lastly, it’s not just consumers sitting on a pile of cash. The corporate cash mountain is reaching new peaks as well. 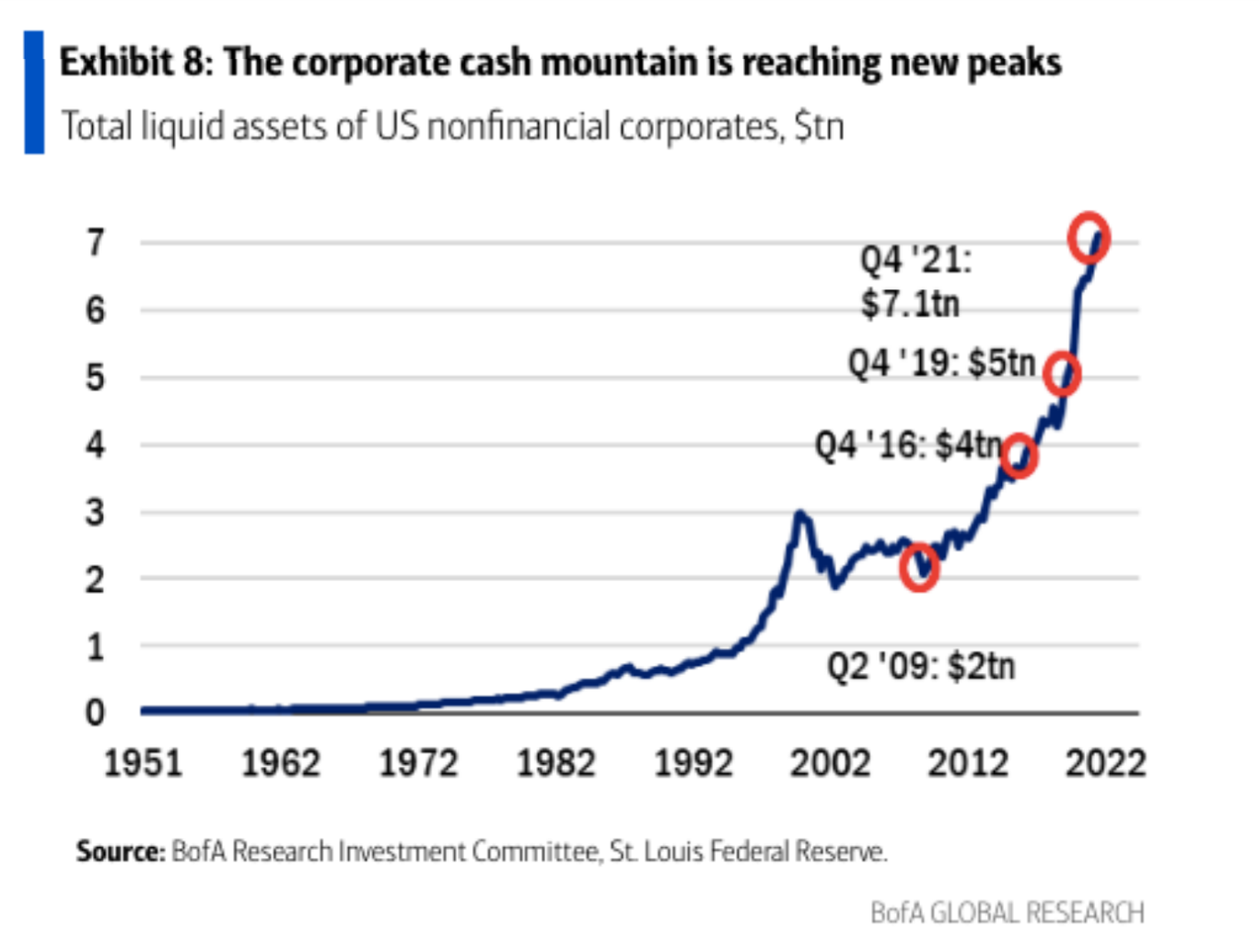 When consumers buy a house or a car, they usually take out a loan. When companies need to buy raw materials and/or expensive equipment, they also use banks. Therefore, if banks restrict access to lending, it can take the economy a long time to recover from a recession. Banks often restrict lending when they have taken on too much risk, which is one of the reasons why it took so long for banks to start lending again after the financial crisis.

Excess reserves refer to the cash held by a bank above the reserve requirement that an authority sets. These act as a buffer during downturns to protect banks from financial losses and ensure they have enough money to pay bills and honor withdrawals. The chart below shows that leading into prior recessions, banks had little to no cushion. 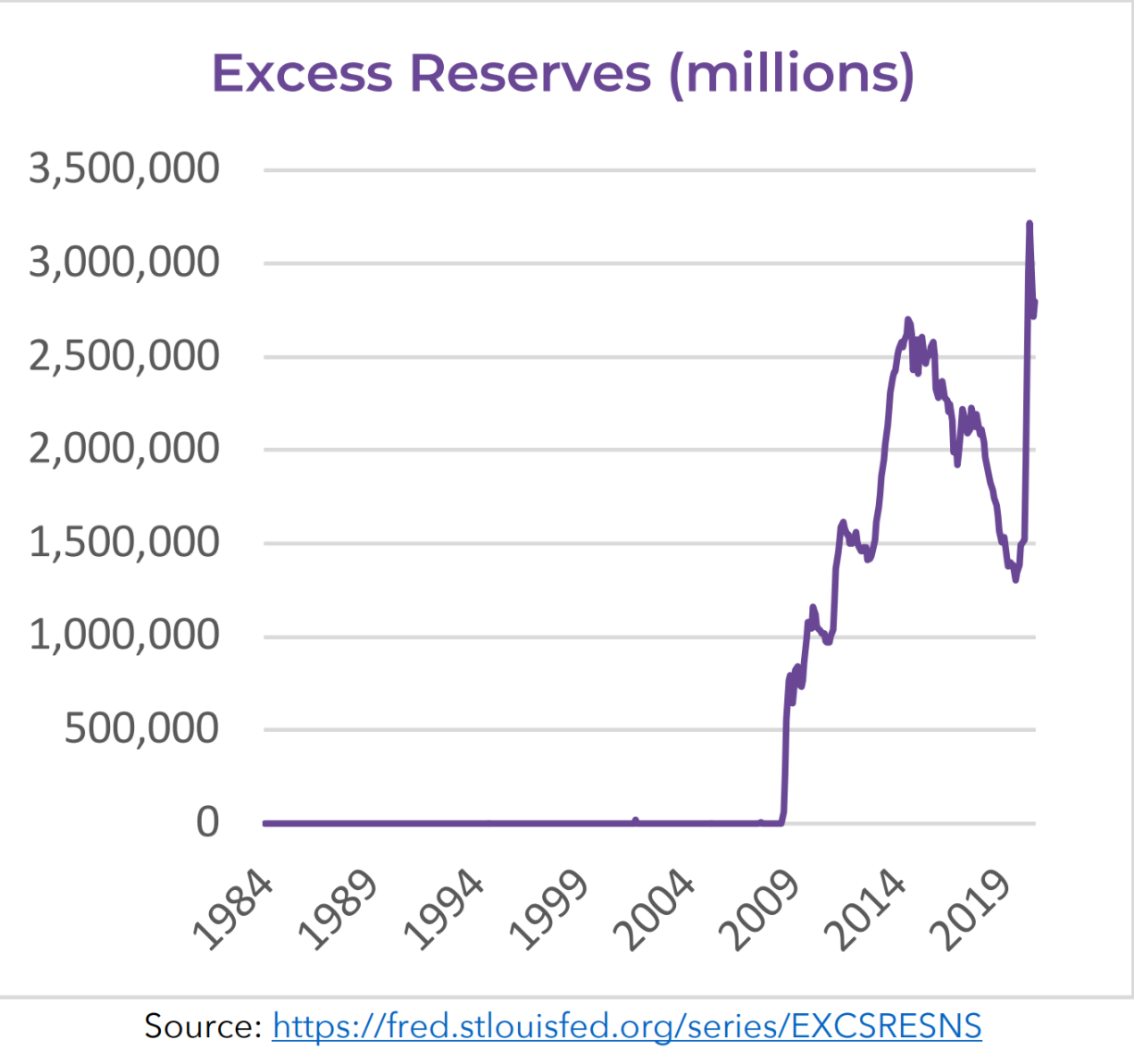 Since 2009, banks have grown this cushion into the trillions. In doing so, if a recession were to occur today, the risk facing banks appears nowhere close to prior cycles.

As of today, the data overwhelmingly suggest that the U.S. is not in a recession. Retail sales and corporate profits remain strong, companies can’t hire fast enough, and consumers continue to transition back to normal after two years of solitude.

But the Federal Reserve could not have done a worse job managing inflation over the last 18 months. Their inability to see that exploding the money supply by over 40% would be more than “transitory” has put the U.S. in a position where a recession is likely in the coming years. That’s the bad news.

The good news is that recessions don’t usually last long relative to expansions, and the duration of recessions has been shrinking. The U.S. has experienced 34 recession cycles since 1854, lasting an average of 17.5 months. However, go back to 1945, and the average recession has lasted 11 months3. And while every recession is different, consumers, businesses, and banks appear to be far better prepared today than in the past. This could further mitigate the depth and duration of a recession, should one arrive.

Lastly, we firmly believe that running to cash is not the best way to prepare for the next recession. The odds that any investment manager could time both the exit and re-entry well enough to move the needle in the right direction is incredibly low. Nor do we feel “staying the course” is the right solution either. If the economy is changing, so should investments. Instead, we feel that slow, deliberate adjustments over time is the best way to profit and moderate risk because migratory moves tend to lower the risk of having to make bigger ones down the road.

The bottom line is that we continue to adjust our investment strategies to prepare for a potential slowdown in economic activity, but we also don’t want to move too far, too fast. A recession is by no means guaranteed, but if one does happen, the country appears to be vastly better prepared than in prior cycles.