The stock market has been relatively calm for most of 2021, but this could be coming to an end. Fears over Omicron and inflation appear to be spooking investors for the first time in months. Is it time to take a break?

The relative calmness that’s blessed investors for most of 2021 could be ending abruptly in the final month. Fears over a new COVID-19 variant and the Federal Reserve finally admitting that inflation could stick around appear to be spooking stocks.

Volatility often begets more volatility because traders try to time the daily, hourly, or even down to the minute movements in stocks. But the chart below shows why investors that have historically done the exact opposite tend to fare better. 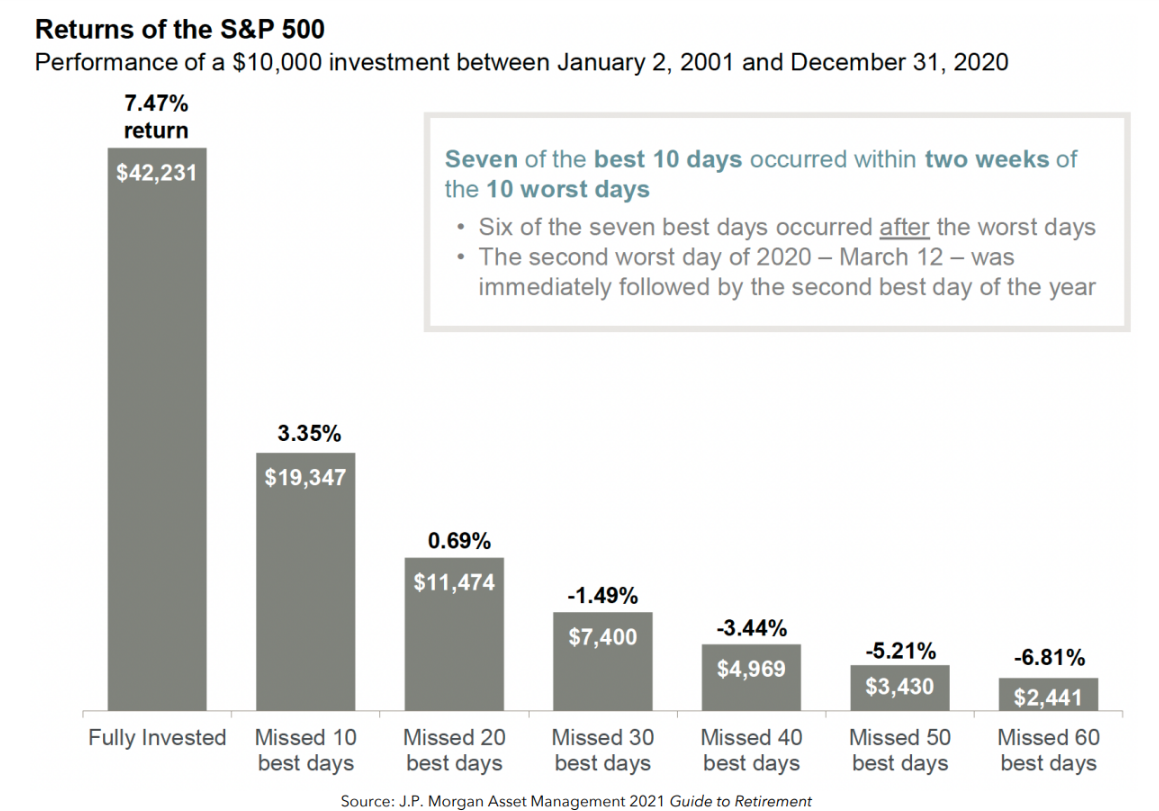 The first bar on the left indicates that a $10,000 investment into the S&P 500 would have grown to $42,231 by the end of last year. That’s an annualized return of 7.47%, which is not too shabby given this includes three horrific recessions. The second bar depicts the return if an investor were to miss the ten best days over the same period. The return is less than half. Miss the twenty best days (third bar) and you barely broke even.

Said another way, there have been 5,032 trading days during this period, so 0.19% (10 ¸ 5,032 = 0.19%) of these days impacted over half of the return. Only twenty trading days in two decades determined whether you beat inflation or not. That’s staggering.

Think back to March of last year, when we experienced the highest volatility ever recorded, and be honest with yourself. Even with the power of hindsight, do you feel like anyone on this planet could have consistently picked the direction of the market when we were being inundated with new information by the hour?

Let’s take this exploration a step further. Here’s an excerpt from Eddy Elfenbein, a money manager who writes a popular investing blog1:

“I looked at all the daily returns for the S&P 500 since 1957. If you take all the days when the S&P 500 moved more than 1.14% in a day, up or down, the combined return comes out to zero. They completely balance each other out.

The high-volatility days happen 16.5% of the time, or roughly one day in six. (I’m just looking at capital gain and not dividends.)

Historically, it’s been to your advantage to stick with a boring, low-vol market.”

Traders are spending all this time and energy looking into crystal balls when, over time, the days they are trying to avoid mostly cancel out the ones they aim to capture.  Best of all is the brutal irony of their efforts depicted in the chart above. By trying to avoid risk, all they end up doing is diving headfirst into it because of the outsized impact of getting just one or two of those big days wrong.

Ok fine. Market timing doesn’t work, but with so much uncertainty, why not just sit this one out? What’s the harm in running to cash and waiting for things to cool down a bit before getting back in? Sure, the best days might get missed, but so should the worst days. If these cancel each other out anyway, what’s the big deal?

The problem is that sitting on the sidelines and taking a break from a long-term investment strategy is just as much market timing as trying to trade through volatility. Therefore, you’re going to need to be right twice – on the way out and then back in. Few get lucky twice on the same trade.

Taking a break also carries massive execution risk because more likely what will happen is one of two outcomes. The first is you will be wrong. The market will move higher, and you’ll have to figure out when to get back in. Good luck!

The second is you are right. The market sells off but now you start thinking that the market could go lower. You so desperately want to bottom tick it that you wait. The market then begins to slowly recover, but you aren’t convinced. You get a few pullbacks, which will only make you think it will fall further, but what’s really happening is three steps forward, and one step back. This psychological downward spiral persists until the market fully recovers, and you’re left on the sidelines waiting for the next correction to get back in.

Furthermore, when things have “cooled down” is usually the worst time to buy. By then, most if not all of the gains are already realized. So, what happens is you end up buying what looks to be less risk, but in reality, is more likely a ticking time bomb.

The bottom line is that occasional pain is the price we must pay to position ourselves for the potential returns offered by stocks. Slow and steady wins this race.