Having been a frequent flyer for over a decade, the best advice I can offer is to never rent a car unless you absolutely must. The added time, hidden fees, and near certainty that the vehicle selected will not be there upon arrival make the entire process infuriating (the immortal genius of Seinfeld is the only supporting evidence needed):

Therefore, when Hertz Rental Car filed for bankruptcy protection on May 22nd, it’s hard to say that I was surprised. Hertz also had around $19 billion in debt (that’s a lot) and roughly 700,000 cars (that’s insane). Those cars were the collateral for the debt, so when used car prices began to plummet in April, the company had to post more collateral (cash). But they didn’t have it because people stopped traveling.

So far, nothing too weird here. A company in an industry disliked almost as much as phone and cable back in the day took on too much debt, and an exogenous force drove it into bankruptcy (pun intended). This happens a lot during economic downturns.

The story starts to get interesting four days later. Between May 26 and June 8, Hertz’s stock exploded in price from 56 cents per share to $5.53 per share - a jaw dropping rise of nearly 10 times1.

This is really strange because companies file for bankruptcy when they can no longer service their debts. The courts then assist with the liquidation of assets to pay back creditors. There is rarely anything left after bond holders get paid back, so equity almost always goes to zero.

The story officially turned ridiculous last week when Hertz announced plans to sell more of its stock to the public (since their stock surged) and use the proceeds to pay back creditors. In my entire career, I’ve never seen a move this bold from a company in this much distress.

The amount of cash that could have been raised from this stock offering was nowhere close to enough to get them out of the hole. Meaning, anyone buying the new stock would most likely see their investment go to zero. Hertz even admitted in its prospectus that the investors could get wiped out in the bankruptcy1.

The publicity and subsequent inquiry from the Securities and Exchange Commission (SEC) convinced management to scrap the plan a week later. But the fact that it got as far as it did is truly spectacular.

This was not an isolated event either. Chesapeake Energy and J.C. Penny are both on the brink of bankruptcy, yet their stocks also surged periodically over the last two weeks. The obvious question then is who has been buying stocks that have virtually no shot of rebounding.

What’s In A Name?

Nikola Tesla was a brilliant engineer and scientist known for designing the alternating-current (AC) electric system, which is the predominant electrical system used across the world today. Tesla, now the most valuable car company in the world2, is named after him.

There is a lesser-known electric vehicle company called Nikola (also named after Nikola Tesla). This company focuses on battery and hydrogen powered commercial trucks, and they recently went public on June 3rd (through an unusual manner that is out of the scope of this discussion). 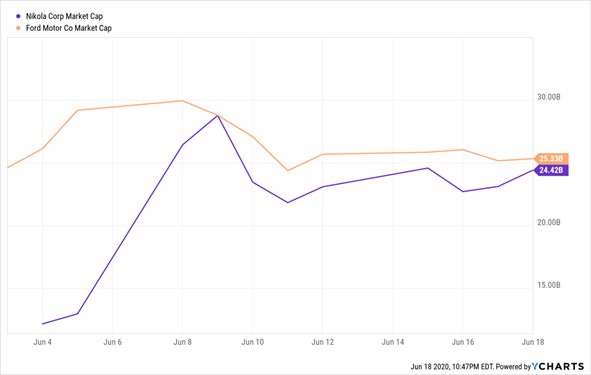 Despite being publicly traded for less than three weeks, the chart below shows that Nikola is now worth almost as much as Ford. That’s pretty amazing, but what transforms this story into borderline unbelievable is that they have yet to produce a vehicle. This paradox also begs the question of who is buying.

For all intents and purposes, there are two classifications for investors. The first is professionals. They go to school to study finance and economics, and they have spent years understanding the intricacies of financial markets and asset pricing. They tend to manage significant assets and are often referred to as “institutional investors.”

The second group of investors is everyone else. This cohort is a blend of experience and skill, but the one commonality is that they do not manage money for a living. The industry refers to these investors as “retail,” due to the smaller size of capital they invest.

The irony of investing is that being a professional does not guarantee better returns over time. I’ve met countless individuals that patiently invested in index funds that have outperformed professionals with Ivy League degrees. Hence, the term “retail” is by no means a derogatory one. It’s just meant to delineate the large institutions from everyone else.

But professionals do tend to be more skilled at assessing risk. For example, professionals probably were not buying Hertz after it filed for bankruptcy. The chart below depicts what most professionals already know – stocks of distressed companies (based on their bond price) almost never recover.

Professional investors also likely remember or have read extensively about the dot-com bubble. Stories of companies with no revenue and stratospheric valuations don’t often end well.

Furthermore, most institutions have strict guidelines around buying stock of a firm in bankruptcy and/or a newly issued stock with no product on the market. If these big money managers break their risk controls, they could be held liable for losses, so these rules are rarely broken.

Since professionals are probably not the ones trading these stocks, let’s look to some of the recent trends on the retail side.

Robinhood is a trading app for smart phones that targets younger traders. They were the first to offer free trading, and they are closely watched in the industry because they offer unique insight into retail trading. They had a staggering 3 million new accounts open in the first quarter of 2020. That’s nearly double the 1.58 million new account openings for Charles Schwab, TD Ameritrade, and E-Trade combined3.

Add up all of these accounts, and it appears that several new retail traders entered the stock market this year. But why now?

Blaise Pascal was a brilliant seventeenth century mathematician and philosopher who famously once said:

“All of human unhappiness comes from a single thing - Not knowing how to remain at rest in a room.”

In my opinion, Pascal nailed this one. People are just bored. They haven’t been able to go out to eat, travel, or socialize. That was mostly illegal until recently, so many have been sitting at home with an empty Netflix queue and no sports to watch (more on this shortly). Those that crave action haven’t had it for some time, and boredom can lead to destructive behavior.

The stock market is perfect to scratch this itch. It’s fast-paced, there are dedicated news channels that follow its every move, and best of all, it’s easy to play. Thanks to companies like Robinhood, all you need is a cell phone and a bank account.

There are other theories floating around that try to explain this surge in retail trading. One is the fear of missing out (FOMO). So many people remember what happened after the financial crisis and every correction in the stock market since, and the Pavlovian response to “buy the dip” is engrained in their psyche. They are afraid of missing out on the next Tesla because they feel they missed out on Tesla. It’s only human nature.

Another theory that has gained some traction is that it’s a pivot from sports betting. Apparently, the demographics of a Robinhood customer are similar to that of a sports bettor (men aged 25-34)4. Since live sports aren’t happening right now, the demand to gamble may have moved to the stock market.

If any of these explanations are correct, then Godspeed. All the best to those who have the courage to throw caution to the wind and treat the stock market like a casino. Just remember that when a venue gets treated like a casino, the outcome tends to look like a casino too (play long enough and you’ll most likely lose).

Lastly, don’t confuse any of this with what’s behind the broader stock market rally. These stories represent a microcosm of overall trading, and while retail investors do have a collective impact, there is simply no way the $20 trillion U.S. stock market could rise the way it has since late March without the support of institutional investors.

The bottom line is that we are just now beginning to see the unintended consequences of forcing people to stay home for months. It’s likely that all of these factors are fueling this most recent surge in retail trading.